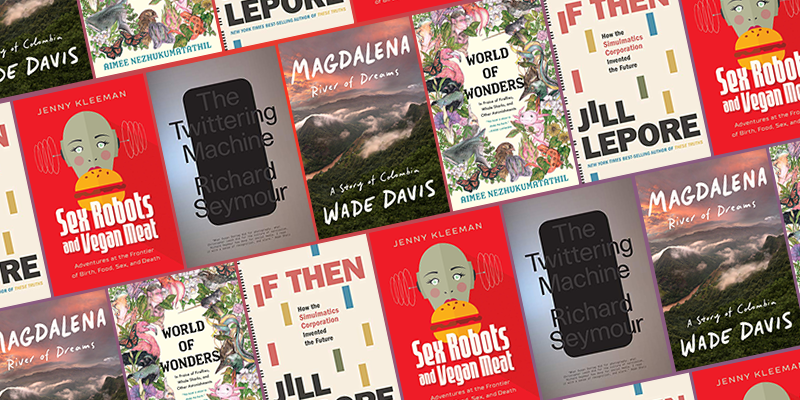 1. Magdalena: River of Dreams: A Story of Colombia by Wade Davis
(Knopf)

“Davis is a powerful, penetrating and immensely knowledgeable writer … Madgalena…is very personal. Its three sections…promise a smooth linear ride downriver, but the text is full of mysterious eddies and crosscurrents … ‘living narratives’ are the heart of a book whose final purpose is to ‘celebrate the true wonder of a country that has long been overlooked and misunderstood.’ Passages of description catch the evanescent flavour of towns along the way … Magdalenais steeped in a physical sense of Colombia: the landscapes, the disreputable backstreets, the irrepressibly resilient people. This eclectic log-book of life on the river puts one in mind of Ryszard Kapuściński’s idea of travel writing as ‘authenticated by its being lived’—’you have experienced this event on your own skin, and it is this experience, this feeling along the surface of your skin, which gives your story its coherence.'”

2. World of Wonders: In Praise of Fireflies, Whale Sharks, and Other Astonishments by Aimee Nezhukumatathil
(Milkweed Editions)

“This charmingly illustrated collection of nature essays is more than it might appear to be at first glance … I thought this was going to be another earnest tome of nature writing…But within a few lines of the first essay in this book it is clear that Aimee Nezhukumatathil is giving us more than that, much more … This book is like the moment when you go to a familiar outside place and suddenly you see some amazing thing you had never expected … Within two pages, nature writing feels different and fresh and new. Nezhukumatathil has written a timely story about love, identity and belonging … a beautiful, poetic and powerful memoir … Each story is a carefully crafted gem in which the personal and the natural history are woven together, to create a loving portrait of her family … Nezhukumatathil takes us in to her childhood world and shows us life through the eyes of that little girl. It is a beguiling and charming tale … a book that in less skillful and honest hands might have been yet another ‘book about nature’ becomes something much richer and deeper. Anyone who ever felt small and shy, like they didn’t quite fit in, will find a reflection in these thoughtful stories … The voice that emerges from the pages is charming and thoughtful, with the confidence and playfulness of a writer who has published four collections of poetry to critical acclaim. But beyond the autobiography and the crafted prose, the book is also a plea for us to remember the beauty and wonder of the wild things around us. It betrays a sincere fear that they are being lost to our indoor and asphalt worlds, where we stare at screens, phones or the pavement instead of at trees, butterflies and the endless sky above us … a very fine book indeed, truly full of wonder.”

3. If Then: How the Simulmatics Corporation Invented the Futureby Jill Lepore
(Liveright)

“Lepore is a brilliant and prolific historian with an eye for unusual and revealing stories, and this one is a remarkable saga, sometimes comical, sometimes ominous … Simulmatics…is almost completely forgotten. Yet Lepore finds in it a plausible untold origin story for our current panopticon: a world of constant surveillance, if not by the state then by megacorporations that make vast fortunes by predicting and manipulating our behavior—including, most insidiously, our behavior as voters … Deeply researched, written with elegance and passion, If Thengives a vivid picture of [Simulatics’ executives’] lives, including their often miserable wives, suffering ‘the bad bargains of the middle-class marriages of the 1950s.'”

4. Sex Robots and Vegan Meat: Adventures at the Frontier of Birth, Food, Sex, and Death by Jenny Kleeman
(Pegasus Books)

“Intriguing updates from the protean worlds of food, companionship, death, and beyond … The author is a focused and charming tour guide, with the kind of breezy writing skills that make each section immensely intriguing … Behind Kleeman’s profiles and research lies the belief that life can be vastly enriched with the aid of technology and without discomfort, inconvenience, or sacrifice even as these modernizations remain in development. Fans of Mary Roach will be pleased. Provocative, exuberant perspectives on the ‘disrupting technologies’ primed to enhance the human experience.”

“…excellent … This is not a book with an accompanying TED Talk, a ten-step program, or One Weird Trick to Fix Everything. Seymour’s pose here is that of a working analyst, not a confident diagnostician. He draws connections, he sketches notes toward a further diagnosis. You can imagine him steepling his fingers and saying, his brow a bit furrowed, ‘Isn’t it interesting that . . . ‘ or ‘You seem very upset about . . . ‘ He deploys journalistic narrative and empirical data, but in general writes with a dense, aphoristic energy … What if the urge lurking behind our compulsive participation in the Twittering Machine is not the behavioralist pursuit of maximized pleasure, but the Freudian death drive—our latent instinct toward inorganic oblivion, destruction, self-obliteration, ‘the ratio’? What if we post self-sabotaging things because we want to sabotage ourselves? What if the reason we tweet is because we wish we were dead?” 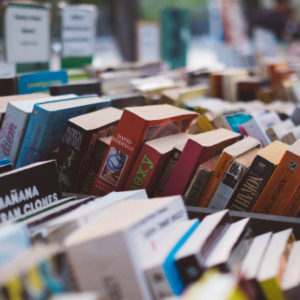 This week on Reading Women, Kendra talks to Julianne Clancy, an Assistant Marketing Director at Knopf, who gives listeners...
© LitHub
Back to top
Loading Comments...