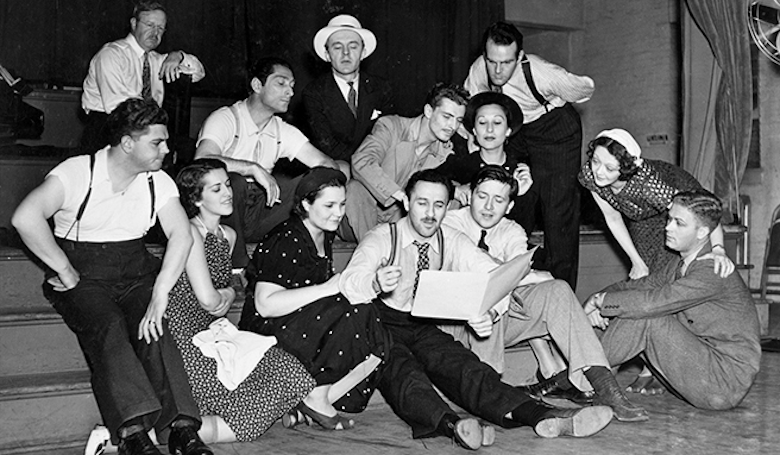 On the Political Musical by Marc Blitzstein

On July 3, 2017 a small bit of American cultural history took place in an overcrowded rehearsal room of the Parks Administration Building in Saratoga Springs, New York. On that evening, a cast of 30 young singers sat facing an orchestra of 24 players—with me in the middle. For three hours we read through the complete score of Marc Blitzstein’s opera/music theater piece The Cradle Will Rock. Heard for the first time in America since 1960, the 58 of us (stage management and the company’s artistic director, Lawrence Edelson, were also present) participated in the sacred act of bringing a long-dormant work back to life. That night, after the last notes of the orchestra were sounded—with its screeching trumpets and unstoppable march—the cast shouted, “The cradle will rock!” and everyone broke into cheers and applause.

The ovation was not for ourselves, of course, but for Marc Blitzstein. He had waited a very long time for this, and we also knew that we were a very select group of people to know what his most famous work actually sounded like. Ever since its historic opening night in June of 1937 when the Maxine Elliott Theatre on 39th Street was padlocked by the New York City Police Department, and the quick thinking of Orson Welles and John Housemen to move the cast to another theater, the vacant Venice Theatre on 58th

Street, where the work was performed with the composer seated at an old upright piano and the cast in the audience, standing when they heard their cue, The Cradle Will Rock has been known and heard as a piano accompanied show. The very idea of confronting the federal government, which after all had paid for the work as part of its Federal Theatre Project, made the recreation of the extraordinary conditions of the premiere more important than the work itself. The recent release of the cast album we ultimately made for Bridge Records should finally establish The Cradle Will Rock as the fully composed masterpiece it is.

There had been laughter that summer night in Saratoga when a slide trombone accompanied the word, “Melt!” After all, on the piano, it was just a note. There had been tears when we heard the ominous bass drum under the sweet harmonies of a love duet for two young people who had no idea that they were about to be murdered. On the piano, it was just a sweet accompaniment. And there were maracas, castanets, the ominous whoosh of sand paper blocks rubbed together, saxophones, an accordion, and a Hawaiian guitar. Who knew?

The fact is, while a few people knew, none of us had heard it until that very hot night in that very small room. And we couldn’t wait to share it will the world. We had the collective sense that although we knew Cradle was interesting, clever, and historically important, we now knew it was a missing link in the history of the American musical theater, and that it was in fact a masterpiece of political activism thinly disguised as entertainment, much in the mold of the operas of Verdi, and the classic Broadway musicals Show Boat, Finian’s Rainbow, South Pacific, and of course Kurt Weill (Johnny Johnson, Lady in the Dark, Lost in the Stars, and his opera Street Scene).

What became clear during the rehearsals and performances was how well constructed the work is. After all, it rehearsed for a very long time in 1937. Even though the premiere was compromised, the rehearsal process was not. Blitzstein later recounted that in return for everyone “from the char woman who swept the theater floor to the most ambitious producer” earned the same $28.00 a week, the show itself had unlimited rehearsal time in which to be developed “to a state of perfection rarely attained in our present-day theater.” The actors and technicians in the company were some of the greatest founding mothers and fathers of the mid-century American stage and screen. The difficulty in assessing the work was that without the orchestration it remained more of a backer’s audition—a series of unstaged sketches held together by a narrator—rather than a fully developed work of music theater. That now had changed.

“The fact is, while a few people knew, none of us had heard it until that very hot night in that very small room. And we couldn’t wait to share it will the world.”

People had understandably forgotten that Orson Welles, John Houseman, Howard Da Silva, and Marc Blitzstein—the genius behind the words and the music and Welles’ principal composer for his Mercury Theater (along with Bernard Herrmann)—had written a fully realized musical play. Over the years, the semi-staged, piano-accompanied Cradle was all to be seen and heard, even though Leonard Bernstein brought the orchestrated work in concert form to New York’s City Center in 1947, and then to Broadway later that year, where, semi-staged, Bernstein again conducted the opening performances of what would be a total run of a mere 34 performances. That cast included Alfred Drake as Larry Forman, and Vivian Vance (yes, Ethel Mertz) as Mrs. Mister.

The orchestra was seated onstage, with the cast seated in front, and with minimal staging by Howard da Silva—ironically Drake’s nemesis in the original 1943 production of Oklahoma! when Da Silva was Judd to Drake’s Curly. A Playbill from the era gives one a good idea of how minimal the production was. The eight production credits start with “Miss Vance’s hat by Harold Green.”

It took until February 11, 1960 for the work to be performed with its songs and ensembles, a slightly cut text, Blitzstein’s orchestrations, scenery, and costumes—once again directed by Da Silva—to be experienced for the first time anywhere. And those five performances by the New York City Opera were the last time this work had been experienced in New York City: a few thousand people who are most likely no longer with us, who cheered, laughed, and were reminded of the power of politically active musical theater 58 years ago. And while the 1960 reviews were positive—the 1937 reviews were printed on front pages of the dailies—some New York critics thought the parable to be old fashioned since the issues of a rich man and his family taking over and corrupting every aspect of society were things of the past.

Without a single updated text change, and maintaining the story in the late 1930s, we all knew this tale of nepotism, bribery, violence, prostitution on every level, fear of change, the manipulation of news, the suspicion of immigrants, and the buying and selling of the middle-class, were not things of the past. All we had to do was perform it as it was written.

We now can marvel at the myriad ways Blitzstein sets his words. They are sometimes simple vernacular American English spoken in the clear, and at other times—Shakespeare-like—rhyming couplets conclude a speech. Sometimes the text is underscored, like a radio drama or a dramatic film. Occasionally Blitzstein asks for his actors to speak in rhythm and ultimately, they are asked to sing. It probably comes as a surprise to learn that Blitzstein composed incidental music to ten plays and seven films, in addition to his musical dramas, ballets, concert works, and art songs.

Above all, Blitzstein was, along with Aaron Copland, the compositional mentor to Leonard Bernstein. Bernstein knew every note of Cradle and championed it. At the same time, one cannot help but hear Cradle in West Side Story and On the Waterfront as well as the parodies in Wonderful Town (“Pass that football!”) and the text settings in Trouble in Tahiti and A Quiet Place.

And, as the American translator of Brecht’s words to The Threepenny Opera, Blitzstein returned the many musical favors he garnered from its composer, Kurt Weill. In 1947, ten years after Cradle’s completion, Weill would complete his great American opera, Street Scene, and Blitzstein’s Cradle was heard for the first time in its original orchestration, conducted by Bernstein who would, after Weill’s untimely death in 1950, lead the first performances of Threepenny in Blitzstein’s famous translation.

And soon enough, Weill’s “Berlin sound”—transplanted to the great White Way by the racial laws of the Third Reich—would resonate on Broadway for the remainder of the century abetted by the music theater works of Marc Blitzstein, and most obviously heard in the works of Kander and Ebb (Cabaret, Chicago) but also in such Broadway epics as Stephen Sondheim’s Sweeney Todd.

If it feels like Marc Blitzstein’s The Cradle Will Rock is attached to everything we Americans hold dear in our music theater, it is because it is.

Over the past five decades, John Mauceri has conducted symphonies, operas, ballets, musicals, and film music around the world, appearing in the world’s most famous venues and serving as music director of four opera companies and three orchestras, as well as hosting television and radio programs. An accomplished recording artist, he has more than 70 albums to his name, and is the recipient of a Grammy, a Tony, a Billboard, two Diapasons d’Or, three Emmys, and four Deutschen Schallplattenkritik awards. He has written for The New York Times, Los Angeles Times, The Times of London, and The Huffington Post, among other publications. He is the author of Maestros and Their Music and most recently, For the Love of Music. 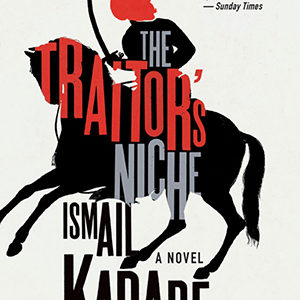 The unblinking eyes met the stares of the passersby and tourists who poured into the square from all directions. The tourists’...
© LitHub
Back to top