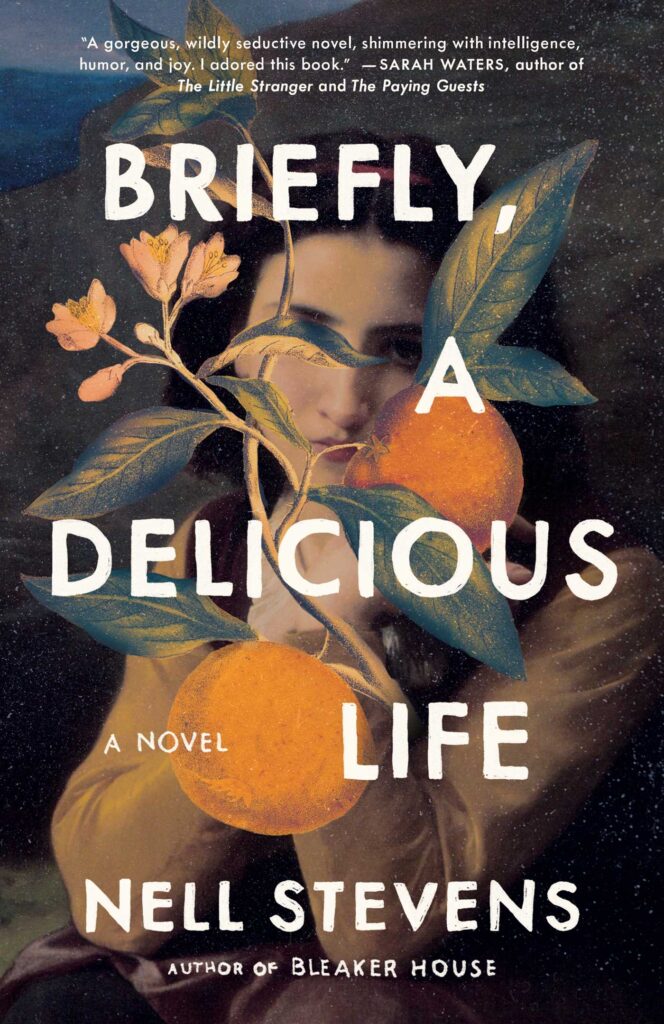 The following is from Nell Stevens' Briefly, A Delicious Life, a daring ghost story about a teenage ghost who falls in love with a writer who doesn’t know she exists. Stevens is the author of Bleaker House and The Victorian & the Romantic, which won the 2019 Somerset Maugham Award. She was shortlisted for the 2018 BBC National Short Story Award and is an Assistant Professor in Creative Writing at the University of Warwick.

My name is Blanca. I died in 1473, when I was fourteen years old, and had been at the Charterhouse ever since. Over the centuries, I suppose, I came to think of it as solely my domain. I knew more about it than anyone else, that was for sure. I knew the generations of monks, and after they left, the great silence of the place. I knew about all sorts: buried treasure, dead-end tunnels, which doors swelled shut in summer with the heat and which in winter with the damp. I knew where the roof leaked, where the rats nested. And still, for all my expertise, there was no sign whatsoever of where these two people had sprung from: the same old corridors, same echoes, same spiders crawling from beam to beam across the ceiling. I was wrong-footed.

The man-who-was-in-fact-a-woman reached out to brush away a leaf that had caught in the hair of the man-who-was-a-man. He was pallid, red-eyed, looked exhausted. She was shorter than him but seemed, now I had a sense of her, the larger of the two. They clambered over the low wall at the end of the garden and sat on it with their backs to me, looking out at the tiered fields of almond trees descending the mountain. She dug in her pocket, fumbled with something I couldn’t see. When she shifted her head a little I realized she was smoking, which was a tiny thing, the smallest thing, but you have to understand that in all my centuries on earth I had never seen anything like it: this woman—I had taken in the shape of her, collarbones, breasts, hips that swelled below her waist—who dressed like a man, kissed like a man, smoked like a man. She swung a leg back over the wall, straddling it as though it were a horse.

That was it. The bracket of her bent leg against the stones. The way her mouth angled around the cigar in a grimace that was almost a smile. The sight of a woman in a well-tailored jacket and trousers. Unexpected, unimagined. A prickling sensation. A stomach-dropping, blood-fizzing, breath-stopping, knotted lurch-and-swoop that I recognized, by then, as the first faltering step towards falling in love.

And then, behind me, everything started happening. Faint rumbling noises growing louder: grunting, heavy objects being dragged across cobbles, the wheezing and occasional shrieks of a donkey. A child laughed. A man shouted. I darted back to see the Charterhouse doors jerk open, a slab of sunlight fall across the tiles, and chaos tumble over the threshold.

A young woman, very red-faced and sweaty from the climb, attempted to control a girl of around ten years old, who was spinning on the worn-down steps so that her skirts blew out. A young man, or perhaps he was still a boy, was attempting to direct the porter leading a donkey laden with cases.

On the threshold of Cell Three, the strangers stood and surveyed it, panting: its expanse of dust, dust sheets, dust twisting like snow through the columns of light slanting in from the windows. It was a small apartment of three conjoined rooms with high ceilings and thick walls, a smell of damp and firewood. The floor stayed cool in hot weather, its cracked tiles plugged with the dead skin of all the monks who had paced them. There was a small fissure in the plaster above the main doorway where, in 1712, Brother Federico had drunkenly hurled a plate. Each of the three rooms had a doorway that opened out onto the overgrown, half-rotten garden where the lovers were. Tendrils reached inside through the windows and doors as though the plants, like these strangers, were trying to move in.

Cell Three had, in recent years, been the busiest part of the Charterhouse, a place that was, admittedly, not known to be busy at all. The Sacristan, having moved into town and sold what few treasures the monks had left behind, turned his mind to landlording; first, he rented out Cell Three to a political refugee from Spain, who arrived looking harried with a highly melancholic wife and their fourteen-year-old daughter in tow. They were pathetically grateful to the Sacristan, who smirked and lifted his hands in protest and said it was his pleasure. He wasted no time in pursuing that pleasure, leaving little presents for the teenage girl to find under the cloisters’ arches, then murmuring sweet things in her ear, then brushing his fingers against her cheek, his lips against hers, and so on. I hated watching it. I screeched after him as he did his rounds; I screwed up pages from Bibles to hurl at his head. He never seemed to care: simply picked up the balls of paper and looked around, bemused, before dropping them and kicking them into corners.

I knew the daughter was pregnant before she did. I snuck inside her body and felt the doubleness, the second heart beating at the bottom of her belly. It was fresh and alarming, the cramping and clenching, the nausea. She started throwing up. I found a bucket in the attic and dragged it to the corner of her room. When she was done, I’d haul it off and dump it out. It took enormous effort for me to make such impact on the world, to move an object from place to place—I am weak, my ability to exert pressure is erratic—but the girl never seemed to wonder what happened to the bucket, how it was that it came back clean every morning; she simply gripped the sides in her shaky, thin fingers and replenished it.

She was almost spherical, mountainous, by the time her parents realized what had happened. They, with their daughter, confronted the Sacristan. (He had barely looked at the girl since she started to show and had not bothered to explain to her that what was happening to her was his fault entirely.) He feigned confusion at first, and then, under pressure from the parents and from me, too—I pummeled his head; he called it a migraine—he shrugged and said, well, yes, it was him, but what of it?

He pointed at the portraits of the Madonna that lined the walls of the Charterhouse corridors: canvas after canvas of broad, white foreheads, beatific smiles, occasional exposed breasts proffered to babies with the faces of old men. Those virgins, he said, were the only ones he was duty bound to protect.

I howled and howled, and the daughter looked up, eyes wide, suddenly afraid. She seemed at last to sense the danger she was in, to understand that the thing she was growing beneath her skin might one day burst out of her so violently and bloodily that she or it or something might die.

The next day the family packed up and left, and I never got to find out what happened.

Over time, the Sacristan became less interested in sex and more interested in food. He moved an old lady called María Antonia into Cell Two. She paid no rent in return for cooking him meals. He told her not to give him bread, and I noticed that whenever he had any, he was overcome with pains and gas. I took to sneaking crumbs into his soup. The bucket the Spanish girl had used was still in Cell Three, and whenever I saw it I liked to imagine her and her baby, wherever they were, together and alive and unmolested.

Now, the newly arrived little girl skidded to the corner, sending up a plume of dust behind her, and peered inside the bucket as though looking for her fortune at the bottom. She tipped it upside down, dislodging a beetle.

“What took you all so long?” The lovers, drawn by the commotion, were standing at the window, the woman leaning into the room with her forearms draped on the sill. Her voice: clear, low.

There was a long silence and then the young man said, somewhat pointedly, “We were carrying things, Mama.”

“Amélie,” the woman said. “Go and make up Chopin’s bed at once. He is exhausted from the climb.” The older girl patted sweat from her face and stared blankly as though she were going to refuse. “Now,” said the woman, and Amélie hauled herself to her feet. I ordered the family in my mind: Mama, Chopin, son, daughter, and reluctant domestic, Amélie. The children and servant looked astonished to find themselves there—kept looking around at the walls and ceiling, at their feet on the floor—as though this was as unexpected by them as it was by me. The adults seemed oblivious. They wandered inside.

Mama crouched down beside a suitcase, unfastened and opened it. Inside was a rubble of oddities that smelled damp and foreign. As she removed a handkerchief, a single moth fluttered up from the case so it looked, for a second, as though the cloth itself was taking off. A magnifying glass, which she held to her face, turning a giant, augmented eye upon the room, owlish and black. When she blinked, her lashes brushed the lens. She placed the glass on the floor beside her left foot, as though that was where she intended to keep it, but as soon as she did so the little girl leapt forwards and carried it off to examine dust in a crevice by the window. Mama withdrew a pair of compasses, walking them idly along her forearm. The points dug into her skin, leaving white spots that shrank and turned pink.

“What are you doing?” said the boy.

Mama dug the point of the compass under her thumbnail, scraping out a crescent of dirt. She looked up. “Unpacking, Maurice.”

And so the foreign family filled the familiar rooms with their unfamiliar things. Mama produced trinket after trinket, clue after clue, from her case, setting them beside her on the floor. Sheet music, scrawled hastily as though it were a lovers’ note. Tobacco. Neckties. A sheaf of papers clasped in a worn-out leather folder, embossed with faded letters that read: From the pen of George Sand.

“We’re really going to stay here?” Maurice, hovering in the doorway from the garden, looked uncertain.

She turned her attention back to her hands and said, wearily I thought, “We really are.”

My heart—the place where my heart had been when I was alive—soared. 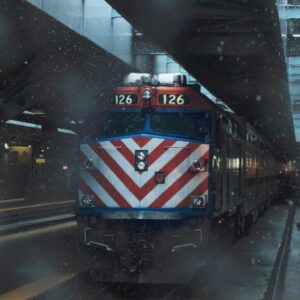 Mimicking Odysseus’ Journey on Chicago’s Metra Train Speed of Dark (She Writes Press, 2022) by Patricia Ricketts opens with a black man getting off Metra train in Northbrook,...
© LitHub
Back to top