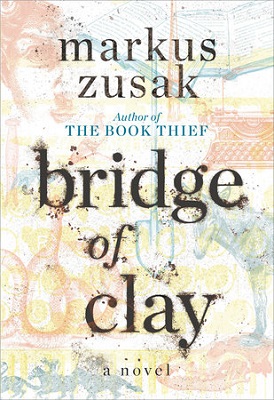 The following is from Markus Zusak's novel, Bridge Of Clay. Having brought each other up in a world run by their own rules, the Dunbar brothers learn to reckon with the adult world and explore the secret behind their father's disappearance. Markus Zusak is the award-winning, #1 bestselling author of five books, including The Book Thief. He lives in Sydney, Australia, with his wife and children.

Portrait Of A Killer As A Middle-Aged Man

If before the beginning (in the writing, at least) was a typewriter, a dog, and a snake, the beginning itself—eleven years previously—was a murderer, a mule, and Clay. Even in beginnings, though, someone needs to go first, and on that day it could only be the Murderer. After all, he was the one who got everything moving forward, and all of us looking back. He did it by arriving. He arrived at six o’clock.

As it was, it was quite appropriate, too, another blistering February evening; the day had cooked the concrete, the sun still high, and aching. It was heat to be held and depended on, or, really, that had hold of him. In the history of all murderers everywhere, this was surely the most pathetic:

At five-foot-ten, he was average height.

At seventy-five kilos, a normal weight.

But make no mistake—he was a wasteland in a suit; he was bent-postured, he was broken. He leaned at the air as if waiting for it to finish him off, only it wouldn’t, not today, for this, fairly suddenly, didn’t feel like a time for murderers to be getting favors.

No, today he could sense it.

He could smell it.

Which pretty much summed things up.

Trust the Murderer to be unkillable at the one moment he was better off dead.

For the longest time, then, ten minutes at least, he stood at the mouth of Archer Street, relieved to have finally made it, terrified to be there. The street didn’t seem much to care; its breeze was close but casual, its smoky scent was touchable. Cars were stubbed out rather than parked, and the power lines drooped from the weight of mute, hot and bothered pigeons. Around it, a city climbed and called:

The voice so warm, beside him.

And he knew it.

And soon the heat came nearer.

“He was a wasteland in a suit; he was bent-postured, he was broken. He leaned at the air as if waiting for it to finish him off, only it wouldn’t, not today, for this, fairly suddenly, didn’t feel like a time for murderers to be getting favors.”

Archer Street began rising to the task now, almost rubbing its hands together, and the Murderer fairly caught alight. He could feel it escalating, somewhere inside his jacket, and with it came the questions:

Could he walk on and finish the beginning?

Could he really see it through?

For a last moment he took the luxury—the thrill of stillness—then swallowed, massaged his crown of thorny hair, and with grim decision, made his way up to number eighteen.

A man in a burning suit.

Of course, he was walking that day at five brothers.

From oldest to youngest:

We would never be the same.

To be fair, though, neither would he—and to give you at least a small taste of what the Murderer was entering into, I should tell you what we were like:

Many considered us tearaways.

Mostly they were right:

Our mother was dead.

Our father had fled.

We swore like bastards, fought like contenders, and punished each other at pool, at table tennis (always on third-or fourth-hand tables, and often set up on the lumpy grass of the backyard), at Monopoly, darts, football, cards, at everything we could get our hands on.

We had a piano no one played.

Our TV was serving a life sentence.

The couch was in for twenty.

Sometimes when our phone rang, one of us would walk out, jog along the porch and go next door; it was just old Mrs. Chilman—she’d bought a new bottle of tomato sauce and couldn’t get the wretched thing open. Then, whoever it was would come back in and let the front door slam, and life went on again.

Yes, for the five of us, life always went on:

It was something we beat into and out of each other, especially when things went completely right, or completely wrong. That was when we’d get out onto Archer Street in evening-afternoon. We’d walk at the city. The towers, the streets. The worried-looking trees. We’d take in the loudmouthed conversations hurled from pubs, houses, and unit blocks, so certain this was our place. We half expected to collect it all up and carry it home, tucked under our arms. It didn’t matter that we’d wake up the next day to find it gone again, on the loose, all buildings and bright light.

In amongst a small roster of dysfunctional pets, we were the only people we knew of, in the end, to be in possession of a mule.

And what a mule he was.

The animal in question was named Achilles, and there was a backstory longer than a country mile as to how he ended up in our suburban backyard in one of the racing quarters of the city. On one hand it involved the abandoned stables and practice track behind our house, an outdated council bylaw, and a sad old fat man with bad spelling. On the other it was our dead mother, our fled father, and the youngest, Tommy Dunbar.

At the time, not everyone in the house was even consulted; the mule’s arrival was controversial. After at least one heated argument, with Rory—

“What-a-y’ mean what, are you shitting me? There’s a donkey in the backyard!”

“A donkey’s a donkey, a mule’s a cross between—”

“I don’t care if it’s a quarter horse crossed with a Shetland bloody pony! What’s it doin’ under the clothesline?”

—we somehow managed to keep him.

Or more to the point, the mule stayed.

“We’d take in the loudmouthed conversations hurled from pubs, houses, and unit blocks, so certain this was our place. We half expected to collect it all up and carry it home, tucked under our arms. It didn’t matter that we’d wake up the next day to find it gone again, on the loose, all buildings and bright light.”

As was the case with the majority of Tommy’s pets, too, there were a few problems when it came to Achilles. Most notably, the mule had ambitions; with the rear fly screen dead and gone, he was known to walk into the house when the back door was ajar, let alone left fully open. It happened at least once a week, and at least once a week I blew a gasket. It sounded something like this:

“Je-sus Christ!” As a blasphemer I was pretty rampant in those days, well known for splitting the Jesus and emphasizing the Christ. “If I’ve told you bastards once, I’ve told you a hundred Goddamn times! Shut the back
door!”

Which brings us once more to the Murderer, and how could he have possibly known?

He could have guessed that when he got here, none of us might be home.

He could have known he’d have to decide between using his old key and waiting on the front porch—to ask his single question, to make his proposition.

It was human derision he expected, even invited, sure.

The hurtful little house, the onslaught of silence.

And that burglar, that pickpocket, of a mule.

At somewhere near quarter past six, he went footstep for footstep with Archer Street, and the beast of burden blinked.

And so it was.

The first pair of eyes the Murderer met inside belonged to Achilles, and Achilles was not to be trifled with. Achilles was in the kitchen, a few steps from the back door, in front of the fridge, with his customary what-the-hell-you-lookin’-at look parked on his long, lopsided face. Flare-nostriled, he was even chewing a bit. Nonchalant. In control. If he was minding the beer he was doing a bloody good job.

At this point, Achilles seemed to be doing all the talking.

First the city, now the mule.

In theory, it made at least some semblance of sense. If something of the equine species might turn up anywhere in this city, it would be here; the stables, the practice track, the distant voice of race callers.

The shock was indescribable, and the surroundings certainly didn’t help. This kitchen was a geography and climate all of its own:

A coastline of dirty dishes stretching toward the sink.

And then the heat, the heat.

Even the mule’s vigilant belligerence eased momentarily in consideration of this terrible, heavyweight heat. It was worse in here than outside, and that was an achievement not to be sniffed at.

Still, it didn’t take Achilles long to be back on task, or was the Murderer so dehydrated he was hallucinating? Of all the kitchens in all the world. He thought fleetingly of shoving his knuckles into his eyes, to wring the vision out, but it was futile.

He was sure this animal—this grey, patchy, ginger, light brown, thatch-faced, wide-eyed, fat-nostriled, casual bastard of a mule—was standing steadfast, on the cracked flooring, victorious, making one thing known, and irrefutably clear:

A murderer should probably do many things, but he should never, under any circumstances, come home.

From Bridge Of Clay. Used with permission of Knopf Books For Young Readers. Copyright © 2018 by Markus Zusak.

On the British Brothers Who Infiltrated Nazi-Occupied France 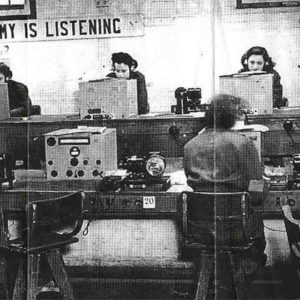 On the British Brothers Who Infiltrated Nazi-Occupied France The German occupation of France, as Dickens wrote of the French Revolution, was the best and the worst of times. The defeat...
© LitHub
Back to top