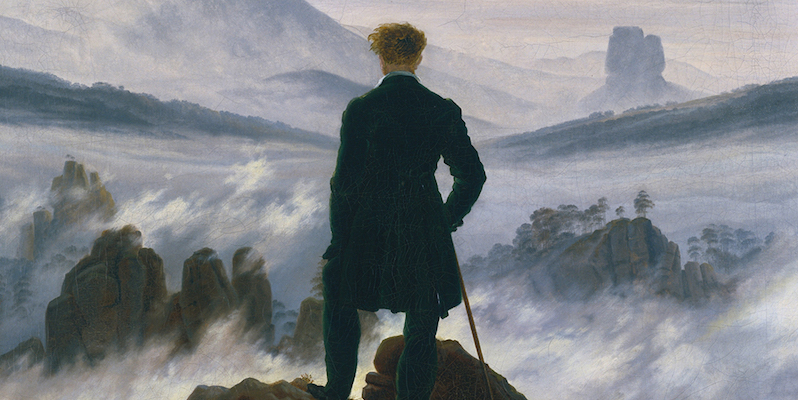 On the Uncitizens of the the Middle World

To be of the Middle World is to have broken away from the parochial, to have left “home” for good (or for worse) whilst carrying all of it with you and to have arrived on foreign shores (at the outset you thought of it as “destination”, but not for long) feeling at ease there without ever being “at home”. Sensing too, that one has now fatally lost the place you may have wanted to run back to. Have you also lost face, or is the “original face” now unveiled?

Exile? Maybe. But exile is a memory disease expressing itself in spastic social behavior: people find it a mysterious ailment and pity you greatly. (J.M.G. Le Clézio has this evocative definition of exile as “he or she who has left the island”; the exile, one assumes, leaves the I-land of self to become water lapping at the continent of we-ness, of belonging.)

Exile could be a passage and you may well speak of “passage people”. Yet, the Middle World is finality beyond exile. For a while at least the reference pole will remain the land from which you had wrenched yourself free or from where you were expelled. Then, exile itself will become the habitat. And in due time, when there’s nothing to go back to or you’ve lost interest, MOR will take shape and you may start inhabiting the in-between.

The terrain is rugged, the stage bathed in a dusty grey light. It is not an easy perch. Wieseltier, in another of his barbed aphorisms, says: “In the modern world, the cruelest thing you can do to people is to make them ashamed of their complexity.”

One location of the Middle World is where the turfs of the outcast, the outsider and the outlaw overlap. It could be a dominion of outers. Is it all shame, therefore? Not on your life! Listen to this poem written in the year 1080 by a Chinese world-traveller, Su Tung-p’o, a functionary who had carnal knowledge of prison and banishment:

A hundred years, free to go, and it’s almost spring;
for the years left, pleasure will be my chief concern.
Out the gate, I do a dance, wind blows my face;
our galloping horses race along as magpies cheer.
I face the wine cup and it’s all a dream,
pick up a poem brush, already inspired.
Why try to fix the blame for troubles past?
Years now I’ve stolen posts I never should have had.

(The translator, Burton Watson, adds that line 3, “I do a dance”, may as well be interpreted as “I stop to piss”.)

Now let me draw the line a little more clearly by proposing a very partial and partisan list of people I consider to be (or have been) of the Middle World; these well-known names make the night of the nameless ones even darker, of course.

The terrain is rugged, the stage bathed in a dusty grey light. It is not an easy perch.

I won’t touch upon religion or science—the Dalai Lama is there by definition, and Einstein was surely an uncitizen of MOR — “I am truly a ‘lone traveler’ and have never belonged to my country, my home, my friends, or even my immediate family, with my whole heart; in the face of all these ties, I have never lost a sense of distance and a need for solitude”; nor music (Mozart was one and so was John Cage with his glass silences), or business (I suspect that Maxwell, the news mogul who became a whale, was also an uncitizen, and Soros may well be there as philosopher-pirate); nor politics (Mandela, for ever driven into self-presentation by prison, burnt clean of attachments, may just be of the Middle World, Trotsky who wore round glasses and a little pointed beard in order to remember his singular self

touched the black walls of this night-land, and so ultimately did Gandhi, impaled on the flash-knife of not “belonging” sufficiently).

You will take me to task for my choices, which depend more on feeling than verifiable assessment, but my sketchy picture includes: Kundera—for a while before he became French; Nureyev; Vidiadhar Surajprasad Naipaul—adrift whilst denying it; Rushdie—neither East nor West but enjoying the party immensely; Bruce Chatwin, exploring the nomadic roads all leading to death; Homi Bhabha—“we now locate the question of culture in the realm of the beyond”; Ieoh Ming Pei, the international architect, and so was Gaudí; Juan Goytisolo; “Saint” John of the Cross and his girlfriend, Teresa of Ávila; Yeats and Pound and Auden, but not Eliot.

Erich von Stroheim, but somehow neither Dietrich nor Chaplin; Edward Said—very intermittently so; Bei Dao, the Chinese exile poet, is in the process of getting his uncitizen papers; Brecht, from the time after he returned to East Germany; Adorno, who relished it, particularly in his late style; Borges—very nearly, tapping his white cane against the gates; Freud — unwittingly, which is not so strange because he fancied himself a scientist when he was in fact but an interesting writer—and probably also Jung; Samuel Beckett, who visualized the workrooms of Middle Worldliness on stage; Pessoa, populating his head with alienated explorers of the self, that slippery slope to damnation.

Vladimir Nabokov, although he tried his best to dissimulate it; Joseph Conrad of the dark heart; J.M.G. Le Clézio; Henri Michaux—“hell is the rhythm of the other”; Rimbaud—both as poet and trader; Victor Segalen; the toothless Artaud and the mutilated Van Gogh, and Cioran, who considered it a shame to have been born, and Max Ernst and Man Ray and Mayakovsky with the hole in the head, and the mild revolutionary Aimé Césaire and Lautréamont (Isidore Ducasse), and Django Reinhardt, and Primo Levi fatally drawn to the downward spiral of the dark stairwell, and Jimi Hendrix and Tristan Tzara; Leonardo da Vinci, painting backwards to the unknowable I as if to light.

Faulkner going down into the thickets of language; Henry Miller, in painful lust, and his buddy, Larry Durrell; Han Shan the Cold Mountain poet and Gary Snyder his disciple; the al-Andalus explorers and historians; Elias Canetti; Mahmoud Darwish—“Where should we go after the last frontiers? Where should the birds fly after the last sky?”; Frantz Fanon and Franz Kafka; Brodsky and Walcott, angrily; Bessy Head and Amos Tutuola in their worlds of spirits; Cervantes of the Missing Hand and Goya with the Screaming Mind; Morandi and Giacometti; Carlos Fuentes but not Octavio Paz and certainly not Vargas Llosa; Frida Kahlo but not Diego Rivera; the Zapatistas of Chiapas but not the Shining Path guerrillas.

Pasolini but not Fellini; Ryszard Kapuściński; Robert Walser—“how fortunate I am not to be able to see in myself anything worth respecting and watching”; Albert Camus; Alexandra David-Neel; William Burroughs, maybe Jack Kerouac, but, I imagine, somehow not Allen Ginsberg; the Chinese wandering monks/artists/poets/exiles; Gauguin, maybe Degas, probably Bacon with the raw meat of his thinking, and Matisse, but neither Picasso nor Cézanne nor Velázquez; Billie Holiday, but not Ella Fitzgerald.

Hannah Arendt—“I am more than ever of the opinion that a decent human existence is possible today only on the fringes of society, where one then runs the risk of starving or being stoned to death. In these circumstances a sense of humor is of great help.” And so many more down the ages…

Was Nietzsche of the detribalized tribe? Or was he more German than mad? And of his acolytes I’d include only Foucault, who had the baldness and the loud taste in attire so typically uncitizen, and perhaps Deleuze, for he did sport extraordinarily long fingernails—although he gradually glad-mouthed himself back to the closed-in compulsiveness of self-indulgent French rhetoric before throwing his body like a stinking dog carcass out the window; the others (Barthes, Derrida, Kristeva) remain too rooted in a Jacobin arrogance where doubt is a cover for self-accretion, they suffer from the blindness of brilliance and besides, the text of itself (and for itself) being skein stretching over rotting body, cannot be the Middle World.

It should be pointed out that Middle Worlders paradoxically have a sharpened awareness of place.

Is one always of the Middle World? It may happen, as in the case of Beckett who walked in order to fall down, and Paul Celan who never escaped, not even when he became a bloated dead goose bobbing on the oily blackness of the Seine. But one may also grow out of it. One is not normally born there, and your children cannot inherit uncitizenship.

How does one draw the map of MOR? Wherever its uncitizens are, there the Middle World is. I don’t have a complete topography because cities and countries may change their coloring on the map and the forces of conformism are voracious. Once more, I’ll not argue the nuances. It should be pointed out that Middle Worlders paradoxically have a sharpened awareness of place (topoï, locus)—as with nomads, the environment may be constantly changing and one does not possess it, but it is always a potentially dangerous framework with which you must interact—and therefore they will know cloud and well and star and fire better than sedentary citizens do.

Alexandria was Middle World territory (by the way, the Middle World has nothing to do with modernity) and so was Beirut once upon a time; Sarajevo belonged before the pigs slaughtered it to “purity”; Hong Kong was an outpost (the poet P.K. Leung wrote, in an admirable volume called City at the End of Time: “Ironically, Hong Kong as a colony provides an alternative space for Chinese people and culture to exist, a hybrid for one to reflect upon the problems of a ‘pure’ and ‘original’ state”).

Paris used to be a section of MOR when it still had a proletariat, many of whom were of foreign origin, living within the walls (by the way, the Middle World has nothing to do with riches or urban sophistication); Cuba may be of the Middle World despite its best efforts at being communist; Berlin, still, although it is now becoming “normalized” as the pan-Germanic capital; Jerusalem, even though its present rulers try to stamp it with the seal of fanatic exclusivity; South Africa went through the birth pains, it was close to understanding a cardinal Middle World law—that you can only survive and move forward by continuing to invent yourself—but then it became a majority-led and majority-smothered democracy instead.

New York, except when it is too close to America; I have heard tales of tolerance and centER-insouciance from a town once known as Mogador, now Essaouira; Tangier, where I celebrated my 21st birthday (bird-day) wrapped in a burnoose, was a refuge despite the closed warren of its Casbah; Timbuktu—how could I forget that sand-whispering place, and the other holy sites of books that could only be reached on the swaying backs of camels—Chinguetti, Ouadane, Ti-chit and Oualâta; Gorée, Sal, Lamu, Zanzibar, Haiti and the other Caribbean islands—most islands tend to be natural outcrops of MOR.

Palestine most certainly—“exodus” can be a high road to the Middle World, and what is now termed the Territories (a euphemism for ghettos and Bantustans, subject to Apartheid) will breed a new generation of uncitizens. 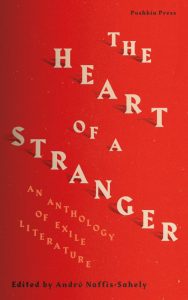 This essay is excerpted from The Heart of a Stranger: An Anthology of Exile Literature (Pushkin Press, 2020), a collection of poetry, fiction and non-fiction that journeys through six continents, with over a hundred contributors drawn from twenty-four languages.