Elayna Trucker on the Aftermath of a Disaster

There is smoke in the air. I can smell it from bed, where I lay reading next to my snoring boyfriend. At first, it doesn’t bother me. It’s almost pleasant, reminiscent of Girl Scout campfires and wood-fired pizza ovens. But the smell doesn’t fade, only gets stronger, and my underlying anxiety leads me to my phone. The only result of my search for “Napa fire 10/8/17” is a junkyard fire in American Canyon at 2pm that afternoon, too early in the day to be scented on the wind this late. Then a text from a friend: “Whoa. Huge fire in Monticello… Atlas Peak Road actually.” My heart jumps and my stomach drops—my parents live near Atlas Peak, just off Soda Canyon Road. I immediately dial my mother’s number when I see that she’s calling me. They’re leaving the house, there’s fire all along the ridge behind them. They’ve got the cars and important documents, but we’re not too worried—they’ve been evacuated due to fire twice before in the decade since they moved to Napa, and both times their house was untouched.

By the time the sun rises Monday morning, there are three enormous fires ravaging Napa and Sonoma Counties; my parents are sleeping in my living room; I am running on about two hours of sleep, having stayed up the entire night listening to the police scanner and texting with sleepless friends who are also tracking the fires. By about 9am, cell service is gone and most buildings on the north and west sides of Napa have lost power. My little apartment near downtown has power and internet, so I stream the news on my laptop and watch in horror, sleep grit at the corner of my eyes, too afraid to look away or take the time to shower, where I might not hear the next alert or firemen banging on my door, ordering  me to evacuate. The fires keep getting worse, new branches springing up and devouring homes and businesses within minutes. As Monday wears on, my boyfriend’s father evacuates his threatened house in Kenwood, a small town between Santa Rosa and Sonoma. We have no news of my own parents’ home.

Through that horrific week, my family, friends, and I anxiously watch every scrap of news and remain glued to social media, the only way that information seems to be getting out. By week’s end, 10,000 firefighters and first responders have descended on our embattled, burning counties. Thick, cloying smoke clogs the air, residue of not just burned trees and grass, but homes, cars, exploded propane tanks, kitchen pots and pans, computers, books, couches, TVs, light posts, mailboxes—quotidian objects now reduced to ashy detritus.

I’m the buyer and operations manager for Napa Bookmine, which has two stores in downtown Napa. No one could bear to go into work on Monday and again on Thursday when the winds were forecast to pick up, and while two of our amazing booksellers, Dan and Paul, were able to open both stores for limited hours every other day, business was understandably abysmal. One of our shops is within the Oxbow Public Market, usually a bustling center with foot traffic in the thousands, but that week it was a ghost town. All shops were given the option of whether to open: some of the restaurants did, but hardly any of the retail establishments.

The people walking through our doors were—are—shell-shocked. Some have lost their homes and everything in them, as the fire moved so quickly they escaped with only their lives. Some homes escaped the fire but their owners saw every house around burn, leaving them with bitter relief mixed with grief for their neighbors. Some neighborhoods were untouched but nearly everyone knows someone who lost everything. And those who came out of the fires unscathed, who didn’t personally know anyone whose home was burned, are still scarred by the primal fear of watching the flames lap hungrily at their city’s outskirts, by the images of neighborhoods that weren’t as lucky as their own.

My little bookstore, which was born entirely from the determination and big heart of its owner, Naomi Chamblin, and the love and support of our town, is scarred too, as are so many other Napa and Sonoma businesses. In the first week of the fire, our downtown store brought in about half of what it had the week before; our Oxbow store made less than 20 percent of what it had the first week of October. This is peak season for Napa, when harvest draws to a close and brings with it tourists enjoying the last luxurious weather of the season and wine club members attending raucous harvest parties. For bookstores and other retail shops, October is the start of the holiday buying season, a period during which  many stores do about 75 percent of their yearly business in these last three months of the year.

By Wednesday morning, we had picture confirmation that my parents’ house was gone, a pile of burnt rubble: all that remained of the home they’d built to be their reward for decades of hard work. Even so, they are among the lucky ones. They have good insurance and resources to ease the financial burden of such staggering loss. Many have neither of these assurances and now may not have jobs to go back to where they could start saving up to rebuild their lives.

Our store employs nine people, two of whom have three small children between them. We’ve had a banner year with strong sales and no staff turnover, but as with any business, our biggest expenditure is payroll, and when sales are continuously sub-par, the easiest expense to cut is employees.

Napa and Sonoma need your money. I’m not talking about donations (though many are in dire need of them; head here to donate to any or all of the four counties affected). I’m talking about your business. Come to Napa. Drink our wine, eat our food, buy our books. Keep our businesses open and our employees working. And if you’re feeling particularly generous, donate a gift card to our Rebuild a Library Fund; these gift cards will be collected through Thanksgiving, at which point we’ll distribute them equally among families who have lost their homes so they can recollect their treasured books. Those far away can help too, by calling 707-733-3199 or emailing read@napabookmine.com to buy one of these gift cards. We’ve already received hundreds of dollars in donations from Napans eager to help each other out.

My parents may have lost their home, but their lives, and so many others’, are still here in Napa. We need to keep our stores open, our restaurants humming, our wineries pouring. Come to Napa. The hills may be charred but our wine is just as delicious as always, our arms just as open.

Elayna Trucker is the buyer and operations manager of Napa Bookmine in Napa, California. 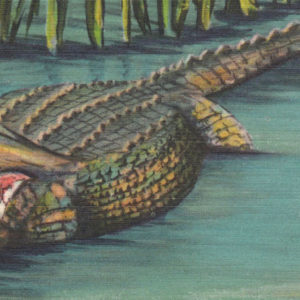 One The largemouth bass is an olive-green fish. In the North East right after ice-out, it most often has a gray color,...
© LitHub
Back to top