"To write well we must sink into the silt of this world."

The following is excerpted from Bonnie Friedman’s Writing Past Dark: Envy, Fear, Distraction, and Other Dilemmas in the Writer’s Life and first appeared in Lit Hub’s Craft of Writing newsletter—sign up here.

My high school creative writing teacher—a tall, elegant woman who fancied hats—tacked up a postcard of T. S. Eliot the first day of class and announced that she intended to refer to him so frequently, she would, for convenience, call him simply “Tseliot.” We were to know whom she meant. She told us that she’d visited Florence that summer, and enacted for us the various writhing poses of Michelangelo’s captives in marble, culminating in the depiction of her rapture when she saw—at last! right before her at the end of the corridor!—the David, and she added what a relief it was to be teaching literature again, what a relief to be away from the mothers on park benches discussing the price of peas.

We were in a rapture. Tseliot! The David! This tall slim woman with the mascaraed, high-cheekboned face and a knack for conjuring a whole scene with just a lift of her hands, the widening of her eyes! We despised the price of peas! We despised mothers on park benches! We were consecrated to art, to beauty, to certain affinities of the spirit that canned vegetables couldn’t in a million years so much as touch. Canned vegetables and their price, and their look—a bowl of ridged carrots steaming before one, a bowl of peas, greenish-yellow, round, dented, regular in size, legumes—legumes!—why the very word showed their utter cloddishness, as if each were a tiny corpse to be eaten, potatoish, stupid, yanked from the earth to yank us back into the earth—a bowl of cooked vegetables was the opposite of everything we meant.

It was affiliated with our particular and ungainly past, with mothers and aprons and mouths in need of wiping, and half-forgotten memories of ice cream melting depressingly into one’s dolloped wedge of birthday cake—with, that is to say, all that left one feeling limited and helpless, all that moored one to the earth. (I’m struck, reading this, by the oblivious sexism of my high school mindset, which was so quick to accept the equation of mothers with mindlessness.) It was affiliated, as well, with all the sights and smells of the shut apartment that in adolescence made one long for distant places, places with marvelous diphthong names: Siam, Sevilla, Tangiers, where, amidst the sweet, acrid fragrance of incense, through air that shimmered with heat, one’s eyes slit like a cat’s in the sensual opulence of the place, the low couches, the blue sky, the music that has woven on and on so long, so repetitively, that it has melted the iron bars of one’s mind and one has slipped out . . . That steaming bowl of vegetables was affiliated with all of us that was never sufficiently understood, all of us that stood as traitors and orphans in our own homes, all that we could not say to those we loved because it would have appeared ridiculous, because it would have appeared pompous and arrogant—and chiefly because we did not know the words for what we meant.

“Transcend” was the magic word that year. When our teacher explained it, I could hardly believe that one word could mean such a marvelous, complicated thing. Transcend, like an invisible departure, like the ghostly white whoosh an old photo managed to register if a person moved. The important part was the blur, not the body. The important part was what you could not see. What you could see was the detritus, the fixed and fraudulent. It was like a boy sizing you up by your face. What was your face to you? Had you chosen your face? Could you exchange it for another more apt? It was a mask, a wall, a bowl of peas. Those to whom it was important were the plodders of the earth, forever deceived.

“I used to read,” remarked a woman on a Greyhound bus. She’d seen me bent over Light in August. “Now I crochet.” I smiled and nodded. She was a pleasant woman, with bright blue eyes. She was going to visit her brother and his wife and their three boys and one girl. They lived just outside Waterbury in a lovely ranch house with a very pretty wood-chip lawn so that you never had to mow. This woman seemed quite nice, but talking to her left me breathless, gasping, as if my life were being sucked out of me. “Um-hmm,” I said, and plunged back into my novel, which I read as if everything symbolized something else, as if things were arrows all pointing away, away, and nothing was what it seemed.

School taught this way of reading. It was a lesson I liked. We wrung each novel between the clenched rollers of interpretation until an ounce of pure meaning squeezed out and the plot, that old bag, could be tossed. We processed literature; we consumed it. We “learned” The Great Gatsby, Macbeth, Pride and Prejudice as if they were Aesop’s Fables and Aesop had cleverly concealed the meaning inside Nick Carraway and Banquo and Elizabeth Bennett, as if the interpretation was superior to the poetry, as if these books had been written to be deciphered, and once a book yielded its interpretation, it could be pretty much thrown away.

“Where is it hidden?” I once cried, flipping a book upside down and shaking it. “Come on! Where’s that deep old thing hidden?” I peered into the binding. I tossed the pages all about.

But my students gazed knowingly, arms crossed over chests, slight smiles on their lips, as if to say the meaning was indeed hidden in there, they were not fooled. The meaning was hidden in there because before they came to class they hadn’t seen the things we talked about, and now they saw them. But it was as if they’d returned to a meadow having been tutored in wildflowers and birds, and suddenly their eyes distinguished devil’s paintbrush and orange hawkweed and grackles and martins and gray catbirds where before there had just been a swatch of bright blossoms and a flutter in the leaves. Are the flowers hiding less now? Are there more birds than before?

When the conditions are right, live things creep up. The author does not need to airlift them in. No need to insert a reptile here, something symbolic over there. The most potent meaning arises indigenously. It looks like earth, like mud, like a log. The more your eyes discern the particulars of the physical world and its inhabitants, the more meaningful your work becomes. This is the meaning that, when it’s laid dormant in the sun long enough, strikes with devouring force.

So many years of assuming we should see words as arrows pointing away, away! But fiction is not made of ideas. Nor is it made of emotion. It is made of words that primarily mean things. It astonished me to discover how much Flaubert, George Orwell, Joan Didion, John Cheever, Tolstoy, Henry James, and Charlotte Brontë all knew of clothing fabrics.

Fiction structures an experience for the reader to live through. That is why its force can be so great. You want your reader to feel a certain way, you want your reader to understand what you have been forced to understand—the insight that eludes words but that you know in your bones. Give up trying to explain. Fiction must convince our bodies for it to have any chance of convincing our minds. And yet is the point of our bodies our minds? Were we given shoulders and a chest and legs and feet just so our brains would have a pedestal? The physical pleasures of a novel exist for themselves, are a good in themselves.

Transcendence is not fleeting, not an absence, but a most attractive presence. To write well we must sink into the silt of this world.

Read more on attention and writing:

Casey Schwartz on choosing to pay attention to a world in crisis.

Brandon Taylor on the purpose and importance of slow reading.

Gregory Brown on letting yourself wander in the writing process.

Jake Wolff on the value of research for fiction writers. 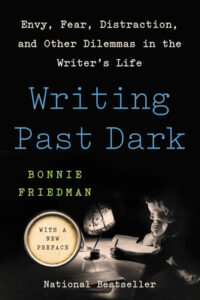 From Writing Past Dark: Envy, Fear, Distraction, and Other Dilemmas in the Writer’s Life. Copyright © 2020 by Bonnie Friedman. Reprinted here with permission from Harper Perennial, an imprint of HarperCollins Publishers.

Bonnie Friedman is the author of the bestselling book Writing Past Dark: Envy, Fear, Distraction, and Other Dilemmas in the Writer's Life, which has been anthologized in six different writing textbooks. She is also the author of the memoir The Thief of Happiness, and, most recently, Surrendering Oz: A Life in Essays, which was longlisted for the PEN/Diamonstein-Spielvogel award in the Art of the Essay. A three-time Notable Essayist in The Best American Essays, her work has been selected for inclusion The Best American Movie Writing, The Best Writing on Writing, The Best of O., the Oprah Magazine, and The Best Buddhist Writing. Her personal essays have appeared in The New York Times, Ploughshares, Image, The Michigan Quarterly Review and other literary journals. 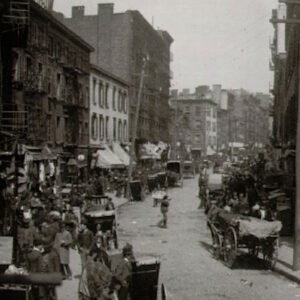 I was eager to jump into my second novel. The setting would be lower Manhattan’s Five Points district—a vibrant, poverty-stricken...
© LitHub
Back to top
Loading Comments...