With Whitney Terrell and V.V. Ganeshananthan on Fiction/Non/Fiction

In this episode of the Fiction/Non/Fiction podcast, fiction writer and memoirist Bich Minh Nguyen talks to hosts V.V. Ganeshananthan and Whitney Terrell about her history as a refugee, recent news about the Trump administration’s anti-immigrant policies, and her holiday traditions.

To hear the full episode, subscribe to the Fiction/Non/Fiction podcast through iTunes, Google Play, Stitcher, Spotify, or your favorite podcast app (make sure to include the forward slashes when searching). You can also listen by streaming from the player below.

Readings for the episode

From the episode
“I grew up as a refugee in a refugee family, but I still felt safe in my American identity. I never thought that was in danger.”
*

V.V. Ganeshananthan: Today, later in the show, we’re definitely discussing Dickens and some other Christmas stories, but first we’re going to return to talk once more about immigration, which has been a huge story this year. And because of the holidays, a lot of us are turning to faith and community traditions that are about welcoming people, welcoming strangers, and it’s an incongruous thing to be doing that while our quote-unquote leaders are batting around the possibilities for funding for Trump’s border wall and after the US has been using tear gas on people who are seeking asylum. It’s time, I think, to go back to this topic.

We were especially thinking, or at least—I was thinking of the [Facebook] post in which you talk about discussing the current situation with immigration and refugees—with your kids. You were a refugee in Guam, and Arkansas, before moving to Michigan, which is where you grew up, and given what your kids know about the news, how do you talk about the news with them, when they also know about your experience?

Bich Minh Nguyen: One of the many horrible things that this current administration is doing is going back on their word to protect and shelter refugees from Vietnam, Cambodia, Laos—people who were directly affected by US involvement, and who were promised safety and shelter in the United States. Now, the Trump administration wants to set about deporting as many people as they can from Vietnam and Cambodia and Laos, and it is one of the subjects that hits close to home for my family, and when my children hear about it, it kind of freaks them out, and they asked me, you know, is this going to happen to you—can you be deported? And it’s a conversation we have about the US government, and immigration policy, and what it means to be a naturalized citizen, and all of that, and it just is very heartbreaking because it shows me, in real time, that promises from the government are not stable, they’re not real, and therefore, my whole idea of reality, and therefore, my children’s idea of reality, feels unstable.

Whitney Terrell: I mean—what do you say to them when they say can you be deported?

BMN: I tell them I can’t be deported because I’m a naturalized citizen, but the point is—so many people are not. So many people don’t have that protection, and that’s the injustice.

WT: This rule you’re talking about was reported in the Atlantic, and other places, about going back on an agreement that the White House had signed with Vietnam, to protect pre-1995 Vietnamese immigrants from deportation, is that what you’re referring to?

WT: So that rule was that—it applies to migrants who are undocumented, or have committed crimes, they’re saying, right, but it feels like this is the beginning of a—in this symbolic gesture feels like it’s like a revocation of the idea that we wanted these people in the first place, right, is that what it feels like to you?

WT: Right, if you get caught jaywalking you—you go, your life is destroyed.

WT: Yeah. Well, what did your kids say?

BMN: Well, for me it is a bigger discussion about what it means to be an American right now, and how our personal safety is not the issue, necessarily, because we are fairly safe. I think I’m safe enough, compared to all of the refugees who aren’t safe, and so I’m trying to always widen the conversation beyond us to people who really need our help.

BMN: With children who are elementary school aged, it’s difficult to know how much they are really taking in, and comprehending. And how much they’re interpreting in ways that—you know, I cannot imagine or intend, so—and it’s not just unique to them, I think that all American children growing up right now are gonna have a lot to contend with.

WT: It’s like, you can explain it to them intellectually, but you don’t know if that’s how they’re feeling it.

BMN: Right. I think—I mean, I grew up as a refugee in a refugee family, but I still felt safe in my American identity. I never thought that was in danger, I never thought it could be taken away from me, and I think that children now don’t feel as safe because of this administration. All of our protections have been turned into things that are called entitlements, or it might be taken away, that everything that we think—you know, could be there for our—for American safety, and prosperity is up for grabs, including, you know, what the future is even going to be, with climate change.

This transcript has been edited and condensed. Transcription by Damian Johansson.

So Many Damn Books: The Holiday Episode! 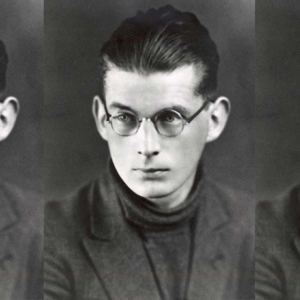 “I’m going to carve this book in stone and bring it to Orwell’s grave.” A profile of exiled Chinese novelist...
© LitHub
Back to top
Loading Comments...