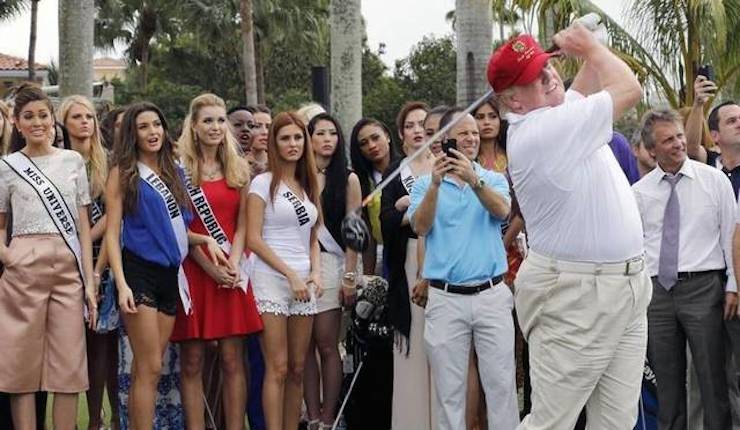 A Look Back at the Last Three Primary Debates

During the week preceding the crucial primaries scheduled for today, Tuesday, March 15th, the Democrats held two debates, and the Republicans one. Although these three events—most notably the GOP affair Thursday night in Miami—have been praised for their surprising substantiveness and lack of rancor, they nonetheless featured a plethora of deliberately deceptive language (or, as we prefer to call it, Spinglish). Following are some prime examples:

“Senator Sanders voted for the bill as well—are you going to ask him the same question?” Hillary Clinton employed this nifty dodge-that-bullet-point response to a query about her support, while first lady, for her husband’s Violent Crime Control and Law Enforcement Act—a 1994 bill that ultimately led to unprecedented growth in prison populations and to greatly increased racial inequity throughout the criminal justice system.

“Well, I’ll tell you something else that Senator Sanders was against. He was against the auto bailout.” Hillary Clinton knew this would be a useful statement to make in Michigan, but it was also a misleading one. Sanders voted for the auto bailout when it was brought up as a separate bill in 2008, but ended up, later, voting against vastly more comprehensive legislation that would end up saving not only American automakers, but also the financial services industry. As Kevin Drum writes in Mother Jones, Clinton was “pointing to a huge bill with a thousand provisions and then criticize[ed] Bernie for voting against one of them—even though it was really the other 999 he opposed.”

“regional candidate.” Immediately after the debate, Jeff Weaver, Senator Sanders’ campaign manager, used this descriptive term in an attempt to dismiss Hillary Clinton as a candidate with limited national appeal. This phrase qualifies not just as spin, but as tailspin, since it is clearly Sanders, not Clinton, who has struggled to appear credible as a viable choice for President across all 50 states.

“I’ve been looking forward to this debate.” Hillary Clinton kicked off the second Democratic debate in three nights with this cheerful observation. According to Washington Post columnist Alexandra Petri, this is the sort of remark that reveals why people don’t trust Clinton. It was, Petri wrote, “either a bald-faced lie or a sign that [she is] some kind of a sociopath.”

“My predecessors did the same thing.” Hillary Clinton’s claim that previous high government officials had maintained private email servers as she did when she served as Secretary of State, was, if not tenuous, certainly spinuous, since only Colin Powell used a private email account, and he did not have a private server in his home.

“with all due respect to my good friend, Hillary Clinton…” Readers familiar with our previous writings know that “with all due respect” is a signal that a decidedly disrespectful verbal assault is coming. Bernie Sanders not only employed this time-tested phrase, but added another classic attack prelude, “my good friend,” to make it clear the tirade he then unleashed against establishment politics, corrupt campaign finance practices, and super-PACS was directed, at least in part, at his opponent.

“I am not a natural politician, in case you haven’t noticed.” So claimed Hillary Clinton, comparing herself unfavorably to her husband and President Obama. Well, just to set the record straight, in case you hadn’t noticed, she is also not the Queen of Romania.

“a very random number.” Donald Trump’s used this dismissive term for the total of 1,237 delegates required under GOP party rules to secure the Republican nomination for president to suggest that, if he reaches the convention in Cleveland with even one more delegate than any other single candidate, he should be declared the winner. In reality, of course, the number isn’t random at all—it’s a simple majority of the delegates. What Trump left unsaid was that other measures of electoral qualification, such as amount of personal wealth, genital size, or golf handicap, might be equally appropriate grounds for the selection of a candidate.

“We have to obey the laws, but we have to expand those laws.” This was Donald Trump’s response to questions about his support of torture techniques like waterboarding. It’s akin to saying we should keep a national speed limit but raise it to 250 mph.

“Common Core is a disaster. And if I am elected president, in the first days as president, I will direct the Department of Education that Common Core ends that day.” This campaign promise from Ted Cruz is interesting in two respects. First, Common Core is not a federal program. As moderator Jake Tapper pointed out earlier in the debate, “Common Core standards were developed by the states, states and localities voluntarily adopt them, and they come up with their own curricula to meet those standards.” In other words, neither President Cruz nor the Department of Education would have the power to rescind them. Second, Cruz announced, just a few minutes later, that he was planning to abolish the Department of Education. Perhaps he intends to keep the agency’s bureaucrats around just long enough to dismantle Common Core before firing them all and “sending education back to the states.”

“83 percent of the federal budget in less than five years will all be spent on Medicare, Medicaid, the interest on the debt.” So claimed Marco Rubio, during his argument about why the structure of Social Security needs to be modified. According to the Congressional Budget Office, the portion of the 2022 federal budget that will actually be expended on the three items Rubio listed is 61 percent. But who’s counting?

“Believe me.” Donald Trump used this phrase on four different occasions during the March 10th debate. As The Washington Post’s Kathleen Parker cautioned in a recent column, “Never believe anyone who says ‘Believe me.’”

[AUTHORS’ NOTE: In the days following these three debates, violence flared at or near four Donald Trump campaign events—in Chicago, Kansas City, St. Louis, and Dayton. Trump was quick to blame these outbreaks on “Bernie, our communist friend,” and further attempted to calm the waters by announcing he was considering paying the legal bills of one of his supporters who was arrested after sucker-punching an African-American demonstrator during a March 9th rally in North Carolina. Marco Rubio, for his part, had a different explanation for the outbreaks: “There’s no doubt,” he said, that President Obama “has been a contributor to this.” But perhaps we can all take comfort from the fact that Donald Trump doesn’t feel we need law enforcement personnel to protect him—or us—from such disturbances. “I was ready for him,” the Republican Party’s current leading vote-getter announced after the Secret Service had wrestled to the ground a protester who had rushed the stage while he was speaking in Ohio.] 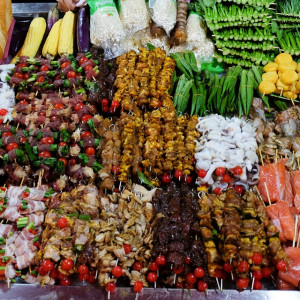 One of the fringe benefits of going out anywhere in Hà Nội even moderately late was the trip home, either pedaled sleepily...
© LitHub
Back to top