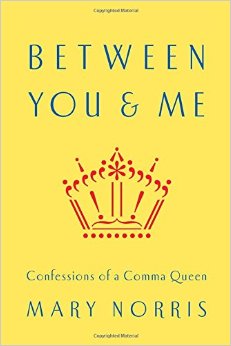 The following is an excerpt from Mary Norris' Between You & Me: Confessions of a Comma Queen,part memoir, part language guide. Norris began working at The New Yorker in 1978, and has been a query proofreader at the magazine since 1993.

In 1981, after three years of indexing articles for The New Yorker’s editorial library, I got a chance to join the collating department. In collating you transferred changes from the editor, the writer, the proofreaders (usually two), and the fact checker onto a clean proof for the printer. It was not a job I was born for: it demanded legible handwriting, and my penmanship had been deteriorating since third grade.

The good thing about collating was that you learned how the place ran: collating was the nexus, it was where everything came together. From copying the changes of proofreaders, I learned what proofreaders did. I got into trouble for abridging the tedious queries of the libel lawyer (they should have made a rubber stamp). I learned New Yorker style on things like numbers by having to write out “three hundred and sixty-five dollars a week.” “But that’s wrong,” I said to my friend Nancy Holyoke when she was training me. I knew from writing checks that the proper formulation was “three hundred sixty-five dollars,” without the “and.” Nancy’s reply was “Nevertheless, that is the way it’s done.” It sounded kind of haughty, but she made it clear to me that unless I got with the program I was going nowhere. When Nancy asked, “Do you want me to tell you your mistakes?” I said yes, and was chagrined to learn that I had misread a checker’s proof and put a hyphen into a word that was meant to be closed up. In collating, I learned to check my work three times, a page at a time: line by line, as I was doing it; then again, line by line, after I’d finished the page; and finally, mechanically, one more time, by looking not at the text but at the changes, starting at the top of the page and moving clockwise down one margin, across the bottom, and up the other. You had to be willing to admit that you were capable of missing something or you would not catch what you’d missed.

Ed Stringham, the head of the collating department, had been at The New Yorker for decades and had grown a hump on his back in the service of the magazine. He came into the office most days at about 3 p.m. He had an ambitious reading agenda, which he charted in a series of black-and-white composition books. He supplemented his reading with the art and the music of whatever culture he was into at the time. He had started with Greece, moved on to Rome, and approached every country in Europe methodically: France, Germany, Spain, Iceland, Norway, Sweden, Denmark, the Faeroe Islands. He became especially involved in the literature of countries behind the Iron Curtain: Poland, Czechoslovakia, Hungary, Romania. He was jaded about The New Yorker. When something came out in the magazine that he really wanted to read (a translation of Man in the Holocene, by the Swiss writer Max Frisch, for example), he waited for it to appear in book form, because he couldn’t enjoy anything that was printed in The New Yorker’s twelve-point Caslon type. He divided up any work that came into the office, even if it was just two pages; for longer pieces he used long division. When the work was done, he stayed at the office, reading at his big slanted desk—more like a drafting table—or in his tattered armchair, smoking cigarettes and spilling sugar packets into and around a cup of takeout coffee. His assistant, me (they made a little show of calling me his “associate”), sat at a desk in a small annex. Ed may have been the model for the character called the Ghost in Jay McInerney’s book Bright Lights, Big City: a pale, white-haired man who roams the halls at night. I recognized him in Jack Kerouac’s The Dharma Bums. He had known Kerouac and Ginsberg at Columbia, and after a drink or two he would start saying things like “Dig it, man.”

The big challenge in collating was what were called Gould proofs. Eleanor Gould was a legendary New Yorker grammarian and query proofreader. She was a certified genius—a member not just of Mensa but of some übergroup within Mensa—and Mr. Shawn had complete faith in her. She read everything in galley—everything except fiction, that is, which she had been taken off of years earlier, as I understood it, because she treated everyone the same, be it Marcel Proust or Annie Proulx, Nabokov or Malcolm Gladwell. Clarity was Eleanor’s lodestar, Fowler’s Modern English her bible, and by the time she was done with a proof the pencil lines on it looked like dreadlocks. Some of the fact pieces were ninety columns long, and Mr. Shawn took every query. My all-time favorite Eleanor Gould query was on Christmas gifts for children: the writer had repeated the old saw that every Raggedy Ann doll has “I love you” written on her little wooden heart, and Eleanor wrote in the margin that it did not, and she knew, because as a child she had performed open-heart surgery on her rag doll and seen with her own eyes that nothing was written on the heart.

Lu Burke sat in the office next to Eleanor’s, her desk facing a wall that James Thurber had drawn on in pencil—a self-portrait, a football player, a man slumped over a typewriter. She was a proofreader and proud of it. “Not everyone can read proof,” she used to say. Lu had worked at Life. At The New Yorker she read the fiction, valuing the writer’s voice over correct usage, and edited the cartoon captions and the newsbreaks, those column fillers that The New Yorker ran, making fun of other publications’ mistakes and making us acutely self-conscious about our own mistakes. “Are the glory years of The New Yorker gone forever?” This was the single typewritten line of a letter from a reader, seared in memory, sent in with a clipping from our pages, in which “chaise longue” had been erroneously rendered “chaise lounge.” (That’s how we said it in Ohio.) In her crisp, inimitable hand, Lu had added her own comment—“They certainly are!”—and circulated the letter. I never made that mistake again.

Lu wore Earth shoes and bluejeans and long-sleeved pullovers and stud earrings. She had short gray hair and snappy blue eyes. She patrolled the halls like a prison warden—you could almost see the ring of keys at her side—and she terrorized anyone new in the copy department. She had a jeweler’s eye for print, and kept a loupe on her desk. Also on her desk was a canister, with a perforated lid, about the size of a shaker for red-pepper flakes in a pizzeria, wrapped in brown paper, on which she had drawn commas and the words “Comma Shaker.” This was Lu’s comment on The New Yorker’s “close” style of punctuation: she thought we used too many commas. Instead of Fowler’s, she preferred a slim volume called Mind the Stop. Lu thought that elements of New Yorker style were ridiculous; for instance, our habit of putting points in I.B.M. when IBM itself had long since done without them, and of sticking a comma in Time, Inc., as if oblivious of the publisher’s own practice (and of the pun on “ink”). Yet there was no more zealous enforcer.

In almost every way Lu was the opposite of Eleanor. She would never make what she called “a wooden fix.” Eleanor might bend a sentence to her own logic; Lu would give it its head. Another colleague, Alice Quinn, once told me how Lu had explained the editorial process: “First we get the rocks out, Alice. Then we get the pebbles out. Then we get the sand out, and the writer’s voice rises. No harm done.” I could picture Lu peering at Alice with her snappy blue eyes, as if she were amusing herself by trying to scare a child. Her proofs, like her manner and her handwriting, were crisp and persuasive (all right, she was a bully). If you laid something in front of her on the desk to ask a question—maybe something subtle about an antecedent—her eye would light on an egregious error, and she’d say, “Get rid of that o,” pointing to a hideous misspelling of “memento.”

The only time you had to use your judgment in collating was when there was a conflict between, say, the author and a proofreader, and the editor hadn’t been clear about which change he preferred, or when the author or a checker added something: it hadn’t gone through the copydesk, so it had to be styled. One of the first decisions I had to make was how to style “copy edit.” I made it one word: “copyedit.” The next day, Eleanor Gould not only undid my change in a revise of the piece but issued a style memo: henceforth “copy editor” was two words as a noun, hyphenated as a verb—“to copy-edit.” It was uncanny: every time I had to make a decision and went with my instinct, I did the opposite of what Eleanor Gould would have done.

The great minefield in collating was a proof from the author, because that is where collating overlapped into copy editing (two words as a gerund). My job was to slavishly (and legibly) copy what was on the proof—I was a scribe—and not to correct or corrupt the text. But surely I wasn’t meant to copy errors. And nobody would appreciate it if I did something obtrusive like insert a question mark in brackets. Everyone would wonder where it came from. It was one thing to correct a spelling—make sure there were two n’s in “annihilate,” for instance—and another to judge what the author meant if he wrote that something or other was “immanent.” Was that a mistake? Or a philosophical position? I’ve never met a usage of “immanent” that made the word’s meaning clear to me. I took one such question to Eleanor Gould, who read it and said, in her slightly braying but kindly voice, “It sounds pretty imminent to me.”

Often a word would come up that I had never seen before and could not find in the dictionary. That didn’t mean it wasn’t there—I just couldn’t see it, probably because I didn’t want to see it. I had a skeptical streak and an ego, and at some level I thought that if I had never seen a particular word it didn’t exist. One year in the Christmas list on food, the writer inserted the word “terrine,” as in “a terrine of foie gras.” I had never seen the word “terrine” (much less an actual terrine full of foie gras) and couldn’t find it in the dictionary, neither the Little Red Web nor the unabridged. So I changed it to “tureen.” I might as well have changed it to “punchbowl.” It was no excuse that I came from a family that didn’t eat a lot of pâté. (The fanciest thing we had on the table was Brown ’n Serve rolls, which we called Black ’n Serve rolls, because my mother usually burned them. A college friend made merciless fun of me in the dining hall when I complained that the butter tasted funny and it came out that I had been raised on margarine.) Fortunately, the structure of the department was such that several people, including the author, read the proofs the next day, and the word appeared in the magazine as “terrine.”

From BETWEEN YOU & ME: CONFESSIONS OF A COMMA QUEEN. Used with the permission of the publisher, W. W. Norton & Company, Inc. Copyright © 2015 by Mary Norris. 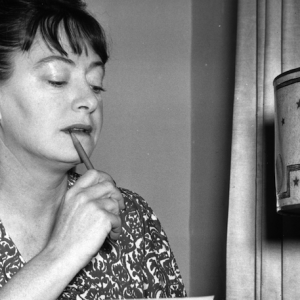