The People in His Life and In His Books...

James Baldwin was, undoubtedly, a compassionate man. A Pentecostal junior minister in his teen years, Baldwin eventually left the church, but the Christian ideal of brotherly love suffused his writing. It is, for example, what he turns to at the conclusion of his essay “Notes of a Native Son” to confront the ongoing violence and indignity of racism in the United States, writing: “Hatred, which could destroy so much, never failed to destroy the man who hated and this was an immutable law.”

Baldwin’s work is not only full of compassion for humanity at large, but love for the individuals in his life as well. His affection is found in the fictional portrayals of actual people in his short stories, plays and novels, such as the semi-autobiographical Go Tell It on the Mountain. It’s present in the references to his family members and friends in his essays and articles. It is perhaps most conspicuous in the dedications of his books—although these inscriptions, without context, elude appreciation.

To better understand Baldwin as an author, it’s necessary to unpack those stories, the ones that precede the stories he relates to us, the ones he only hints at. Below, then, is a bit of context for three of the dedications that James Baldwin makes in his books. The details are gleaned primarily from David Lemming’s book James Baldwin: A Biography.

Published in 1956, Baldwin’s second novel, Giovanni’s Room, is dedicated to the Swiss painter Lucien Happersberger. His relationship with Happersberger, Baldwin wrote in a letter to his brother, was “the one real love story of my life.”

Baldwin and Happersberger met shortly after the former’s arrival in Paris in 1949, sparking a love affair which soon burned out, although the warmth of their friendship radiated through the years to come. The winter between 1951 and 1952 came the closest to domestic bliss that the two men would ever share, living together in a small chateau in the Swiss Alps, with Baldwin working on his first novel, Go Tell It on the Mountain, while Happersberger painted. Soon after, Happersberger, who was bisexual, married his first wife.

Although the fallout from the failed love affair would torment Baldwin on and off for the rest of his life, he and Happersberger remained close until the author’s death from stomach cancer in 1987. Happersberger, in fact, sat by Baldwin’s deathbed for nearly an entire day before he passed away.

“For Mary S. Painter”
–Another Country

Baldwin and Painter Garin met in 1950 in Paris, where he had gone to escape American prejudice against blacks and gays, and where she was working as part of the Marshall Plan. They, along with Happersberger, bonded over music, whiskey and cigarettes, becoming lifelong friends. It was to Painter Garin whom Baldwin turned when he and Happersberger needed money. It was at her home in Paris that Baldwin celebrated receiving a grant from the National Institute of Arts and Letters in 1956. It was she whom he called later that same year when he attempted suicide, she who forced him to vomit up the sleeping pills.

Unable to cope with his romantic failures, the social alienation of being an expatriate and a novel that would just not come together, Baldwin had turned to taking his own life. Another Country was the manuscript he despaired over, and he dedicated it to the woman who had ensured it would be completed.

On the morning of June 12, 1963, Medgar Evers, a 37-year-old NAACP field secretary, was shot in the back of the head and killed by Byron De La Beckwith, a white supremacist. Three months later, four members of the KKK bombed the Sixteenth Street Baptist Church in Birmingham, killing four young black girls attending Sunday school. Baldwin was deeply affected by both of these tragedies.

In his foreword to Blues for Mister Charlie, his second play, the author recalls accompanying Evers on a short trip in Mississippi to investigate the murder of Emmett Till, a black teenager lynched for allegedly flirting with a white woman. The case provided the basis of Mister Charlie, which Baldwin began in 1959 but was unable to complete until 1964—steeled as he was by Evers’ murder and the Birmingham bombing.

Upon its release, Mister Charlie was lauded by the likes of Tennessee Williams, Sidney Poitier, Miles Davis and others as “a gift of great value to the American heart.” The play was yet another of Baldwin’s efforts at compassion, another instance of him paying testament to those he cherished. 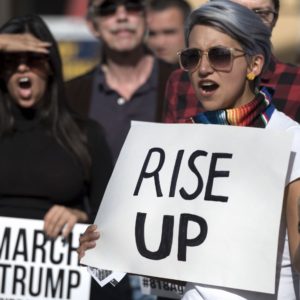 It may be by sheer coincidence that some 12,000 writers will descend on Washington DC this week—but many of them are not...
© LitHub
Back to top