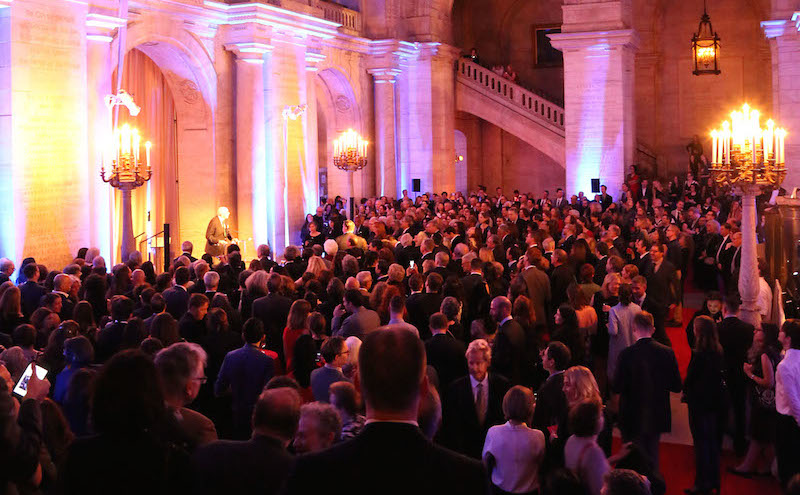 Walking up the steps of the New York Public Library the first thing one saw was a diffuse, anxious pack of borzoi, Russian wolfhounds tethered to even more anxious handlers, themselves preoccupied with asking for last names. “Lebowitz, Fran? Ondaatje… Can you spell that? Russo, Richard?” This was the 100th birthday party of Alfred A. Knopf’s book publishing concern, and the literary world showed up in force to pay its respects. The room, the Astor Room—vaulted, magnificent—filled up quickly.

As Sam Shepard chatted with Patti Smith, and Bill Buford clinked glasses with Jay McInerney, the man of the hour, Sonny Mehta, collected himself under the great doric sweep of the room, ceiling spotlit with a giant white borzoi, to deliver the evening’s benediction.

To summarize: it’s the writers. Knopf has lasted because of its authors. This is a good way to approach publishing. Find and pay very good writers. Prosper.

As the borzoi-for-hire feasted on caviar somewhere deep beneath the Bryant Park lawn, Mr. Mehta elegantly, eloquently (as ever) ceded the stage to Robert Caro, himself a grand, pugnacious gentleman of the old New York School, who expressed deep gratitude at finding a publishing house willing and able to promote his early box-length manuscripts.

Following Mr. Caro’s genteel appreciation was the ever-charming bookseller Mitch Kaplan, of Miami’s Books and Books, whose very apt description of Knopf’s perennially interesting list as “a dinner party you don’t want to leave” was a fine description of this particular birthday party. Also, recounted Mr. Kaplan, once upon a time Sonny Mehta sent him a galley of a book by a little-known Canadian, called The English Patient, and asked his opinion. Michael Ondaatje, elbow on the bar, seemed unconcerned with the final judgment.

Next up was James Ellroy. It was as if the hurricane had come early and the End Times had arrived. The power of books! The glories of literature! The Church of Knopf! Worshipping at the foot of the holy borzoi, or as Mr. Ellroy would have it, THE HOLY BORZOI. (Judy Blume looked worried, Renata Adler did not). Hands raised, face skyward, Mr. Ellroy, who seems genuinely touched, gave stormy testimony to the Church of Knopf, finding in himself that 17-year-old boy who first discovered the slant truths of Raymond Chandler, propulsive similes buried deep within the 50th Anniversary Knopf compendium which, if our math is correct, came out in 1965.

But Chaucer can be hard on the annexes, and it was a miracle that the murmuring, drink-seeking crowd shut up for the next speaker, but SHE is one who creates miracles—Toni Morrison, in a wheelchair, tough, smart, funny. For Ms. Morrison, it was Mr. Mehta’s predecessor, the great Robert Gottlieb, who came in for the highest praise. Even the borzois sat still.

Finally, that most unlikely of Knopf stars took the stage to sing. Without accompaniment, in a great, echoey void, Patti Smith sang a lovely, pure song—deep, life-weary, and true. If you were there, at the party, please make note of any who complained, and expel them from your life.

The party continued. The borzois, off the clock, wandered down into the wild byways of K-Town. 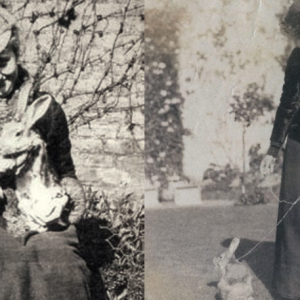 From Pliny the Elder to Twin Peaks, the poetics of everyone’s favorite “monster of the night,” owls. | Literary...
© LitHub
Back to top
Loading Comments...