Sara Novic on the Rich Complexity of American Sign Language

Over the years I have developed a habit of looking behind strangers’ ears to check for hearing aids. I often do it on the subway though I know I shouldn’t—I have been on the receiving-end of lingering train looks before and know that it is creepy.

This is not even a particularly effective way of finding a Deaf person; many of us don’t wear hearing aids, and plenty of people who do aren’t Deaf, at least not in the cultural sense. Increasingly these days there’s the false excitement of coming upon some newfangled Bluetooth device, and the subsequent letdown in realizing the wearer is definitely not Deaf.

Still, I keep an eye out for the telltale silicon mold or plastic tubing snaked into a fellow passenger’s ear. I do this in the hope that the person would look up and see me, too; I do it to quell a feeling in my stomach, lukewarm and hollow. It’s the same sensation I got when our 5th grade class went to sleep-away camp for the weekend, or when I left for college, when I was in the States missing Croatia, or in Croatia missing the States: I am homesick.

I recently brought Jhumpa Lahiri’s Teach Yourself Italian, the precursor to her new Italian memoir, before a group of undergraduates. They unanimously declared it a strange project—why the brute force effort of learning Italian, a task which proved so frustrating time and again? The author already wrote so beautifully (and became famous!) in English, they said—was the Italian project some kind of masochism, punishment for having succeeded?

Over the years I’ve grown used to students’ dissent against assigned readings, usually a posturing built to mask the insecurity of an incomplete understanding of the text, or a desire to find flaw in something “the authorities” have condoned. But their response to this piece caught me off-guard: Lahiri so clearly expounds on her complex relationship with English, both as a successful writer and “a writer who doesn’t belong to any language.” Then, headed home on the Brooklyn-bound A, studying strangers’ ears, I considered that my students’ reaction to the piece was the result of a different kind of struggle—they had perhaps too good a command of English; they were comfortable, felt ownership of it. In turn, I’d had such an affinity for Lahiri’s project because her predicament is also mine.

These days I’ve got three languages rattling around in my head: English, Croatian, and American Sign Language (ASL). (There was a point at the start of college when I could read novels in Spanish, but that muscle has since atrophied.) Where I am and who I’m with dictates which language is in the driver’s seat, of course, but they’re always in there, vying for control.

English is the language in which I write and teach, by far the one I use most. It is valuable to me for its utility, for the way I can make myself understood to the ever-growing number of other English speakers globally. And yet it holds very little of my personality. My Croatian is far less polished, and in my daily life in the States, much less useful. But Croatian has somehow kept its grips on the instinctual—it gives voice to the most visceral parts of me. It is still the language of involuntary exclamation, in which I shout when I am surprised, or, when I really hurt myself, I curse.

Croatian is also the language in which I see my own sense of humor—black and deadpan—most seamlessly reflected. I have never been part of or witness to a Croatian conversation of that didn’t turn to some extended ironic discourse in five minutes or less. And while undoubtedly all manner of sarcasm and snark can be contained in English, I do think certain kinds of humor reside more comfortably in some language families and cultures than others.

Recently I had the pleasure of reading Oliver Ready’s new translation of Crime and Punishment while serving as a judge for the PEN Translation prize. I had slogged through the Garnett translation, and was surprised to find myself now laughing through the novel. I tracked down the friend who’d raved about the book years before.

“Crime and Punishment is funny?”

“It’s hilarious,” he said. “I was always surprised you didn’t like it.” He’d read the book in Croatian.

Then again there are plenty of ways I feel the restrictions of Croatian, a language muscle, which these days I rarely get to stretch. My sentences are childlike, and I’m forced to move circuitously around a word I don’t know. Perhaps this could foster another kind of creative freedom for some. But for me, Croatian s also laden with the weight of history, inextricable from a place where I don’t completely fit.

Then there is my deafness, another kink in the mother tongue. Because of it, English, Croatian, or any spoken language can never truly be mine. Only about 60 percent of spoken English, for example, is visible on the lips—the rest is practice, context clues, guesswork. On top of that, there is the vampiric task of letting my own voice out into the void—like Dracula without his reflection I use my voice with no feedback, no idea of how it blends or clashes or is lost among other sounds it meets outside my mouth. The fact that I had progressive hearing loss and have heard speech in the past makes the task easier, though no less intimidating. 60 percent is a D-; 60 percent is not enough to feel at home.

In American Sign Language, I am at home. Or at least, I’m at ease there—I see my reflection, and I can understand others without having to guess. And, like seeing my humor manifested in Slavic languages, I find another facet of my personality revealed via ASL: in sign language, I’m not shy.

In English conversation I feel uneasy and would rather just stay quiet. But ASL requires a command over one’s body that overrides the nerves. A signer needs her hands, arms, shoulders, chest, mouth, nose and eyebrows at the ready to provide important grammatical information about whether a sentence is a statement or a question, or to elucidate the size, quality, or duration of a given object or event. The most successful signed conversations require almost unbroken eye contact, but because there is so much information to receive this rarely feels awkward.

Due to its visual modality, ASL can be a blunt language—there are no euphemisms for a person’s race, weight, or any kind of distinguishing physical identifier. Deaf culture, too, perpetuates this frankness—stemming from a pre-tech time when it was hard to track a deaf person down, it is normal to give a friend a detailed description of one’s plans, feelings, and bodily functions, the definition of an English language “overshare.” The culture has no room for squeamishness, so it falls away.

Deaf culture is founded on storytelling, a culture more obsessed with its own language than any other I’ve encountered. This is borne of necessity—ASL is not quite a language in exile, but not for lack of trying. America has a long tradition of systematic attempts to quash signed language in favor of speech, to force deaf people to integrate into “normal” society. With ninety percent of deaf children born to hearing parents, deaf people are usually a linguistic minority within their own families. Further, since deafness broaches all genders, races, religions and economic classes, the diverse community places high value on its one shared component: its language. ASL vlogging and theater is a popular hobby for Deaf people, and storytelling competitions and poetry slam events are common community meet-ups. As a culture constantly labeled “less than” by the mainstream, ASL users love to showboat the potential of a three-dimensional language, in which players in a narrative can be set up and moved around in space.

As a minority language under English, ASL is always in contact and at play with English words and sounds. ASL is completely untethered to English grammar—syntactically it’s more akin to Japanese—but ASL users also read and write in English at school, so its presence is never far away. ASL’s response to this tension is to borrow some words (called “loan signs”), but more importantly, to synthesize wordplay that only a person fluent in both languages would pick up, a way of taking English literally into our own hands. A well-known example of this is the pun-sign for “pasteurized,” in which a signer makes the sign for “milk” and moves it across the head—past your eyes.

With all this in mind, it is easy to see how a writer might be especially attached to a culture that holds language and storytelling in such high esteem. But there is a catch: ASL has no written form. Linguists have devised several notation systems to record signs on a basic level, but they are scientific tools and are rarely used.

What does it mean to be a writer whose language negates the possibility of the written word? On one hand, perhaps this is part of its pull—I exist in the present in ASL because the anxieties of my work are bound up in another language. On the other, writing, books, the things I have loved most since I was small, are at odds with my body. On days like today, when writing is difficult, this feels like a loss. The one language in which I am fully comfortable I cannot write, not exactly. But without it I would certainly be a lesser storyteller.

I take heart in what I think is the key advice to be extracted from Lahiri’s project: to be as effective a writer as possible, one can never get comfortable. If we are completely at ease in life or in language, what is the incentive to create new worlds? In this light, to have a part of home in three languages is a great privilege. And though both my English and Croatian are partially obscured, perhaps there is value in those missing pieces; to be at ease in a liminal space puts me ahead in knowing how little I know.

I still look for other Deaf people on the subway, trying to catch sight of someone else who hails from a linguistic borderland. Every once in a while we find one another and exchange a sign or two. It fortifies me, like the smell of ćevapi with pita and red onion, or a glimpse of the cerulean sea, to be at home for a moment before moving on. 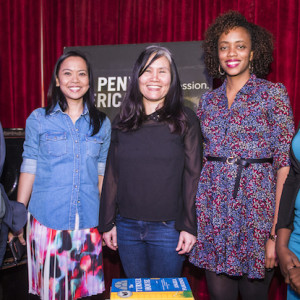 Tonight, PEN America will announce the recipient of the 2016 PEN/Robert W. Bingham Prize for Debut Fiction at its annual...
© LitHub
Back to top