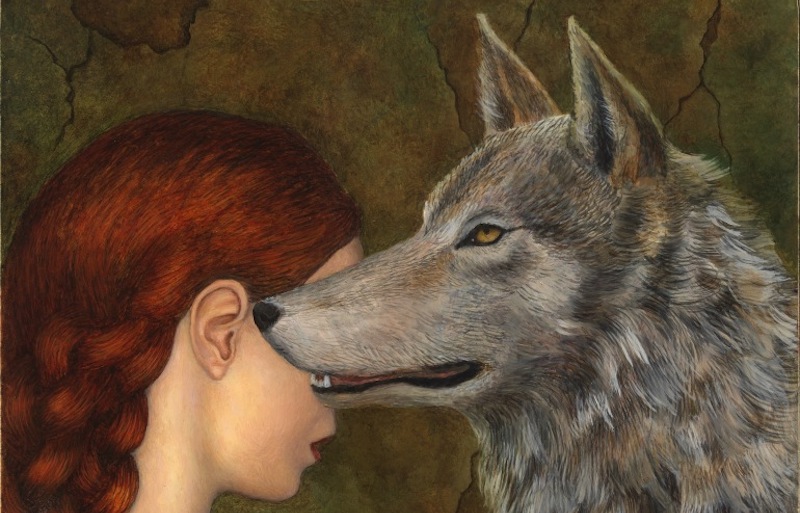 The Twisted Imagery of Gothic Mysticism

If you’re reading this space, it’s likely you’ve at least heard of the incredible Angela Carter, whose feminist fairy tale retellings spawned a (still-continuing) widespread literary obsession with surrealist mythmaking and reframing. Her work is delicious: sensual, dark, sharp-tongued. Carter is one of those writers who gets constantly named as an influence by other writers of all kinds, but she is also referenced, reflected and reframed in visual art on a regular basis. 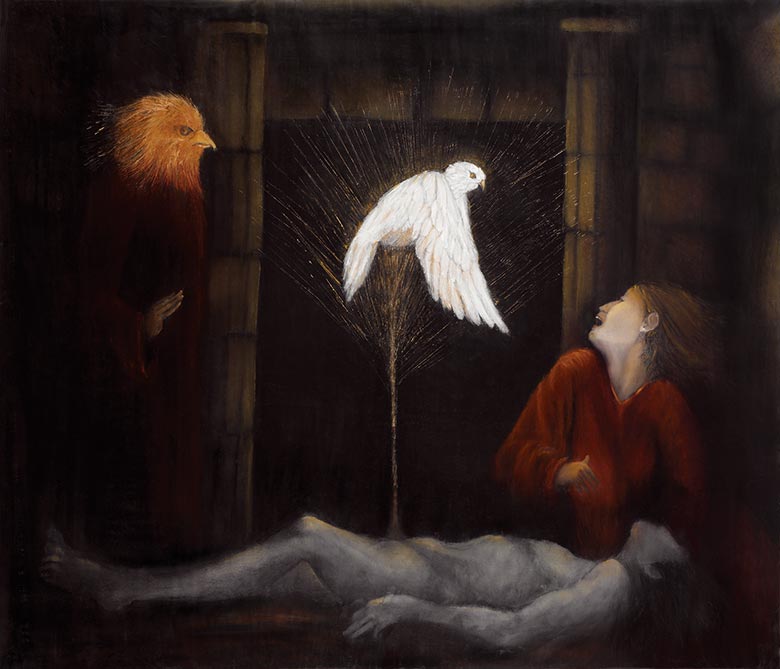 Exhibit A: Strange Worlds: The Vision of Angela Carter, which opens this weekend at the RWA in Bristol.

This exhibition features select works that echo Carterian themes, including those by Marc Chagall and Leonora Carrington (one of my personal all-time favorites), as well as works by contemporary artists directly inspired by Carter. The gallery describes the exhibition as “delving into the latent meanings of childhood fairytales and the twisted imagery of gothic mysticism,” as well as paying “homage to the dark and compelling drama of Carter’s visual imagination—brutal, surrealist and savage.” 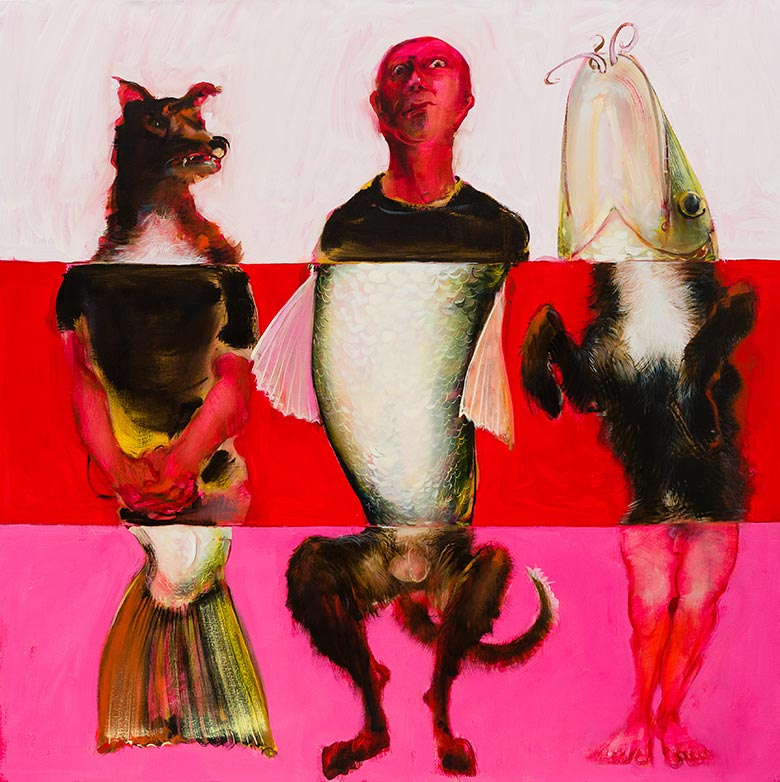 Nicola Bealing, The Misfits, 2014. From Strange Worlds: The Vision of Angela Carter

Now, the fairy tale itself is deeply connected to the visual in our imaginations, of course—most of us encountered fairy tales for the first time in illustrated texts. But fairy tales, I would argue, are also inherently transgressive, and so is art, and there seems to me to be a natural kinship between the two. Also, as Kate Bernheimer, author and editor of the Fairy Tale Review, has pointed out, art frequently uses some of the same core formal components of fairy tales—flatness (which Bernheimer identifies in, for example, the work of Kara Walker), abstraction, intuitive logic and normalized magic. 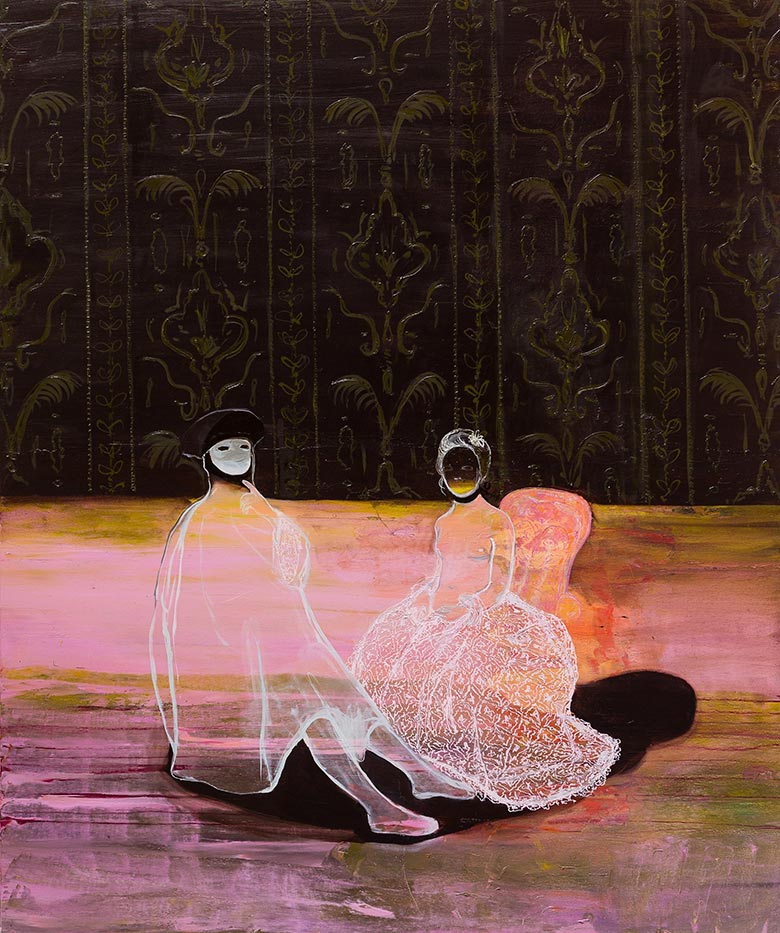 Lisa Wright, After the Masked Visitor, 2015. From Strange Worlds: The Vision of Angela Carter

But Carter was also interested in and influenced by visual art, and continually investigated visual elements—voyeurism, the male gaze—in her fiction, most notably, of course, in her retelling of the Bluebeard story, “The Bloody Chamber.” Indeed, to coincide with the exhibition, in January the RWA is hosting a conference on Carter that “aims to give new insights into the strange and pyrotechnic worlds of Angela Carter and pay tribute to her visual imagination, as well re-assessing her impact and importance for the twenty-first century.” 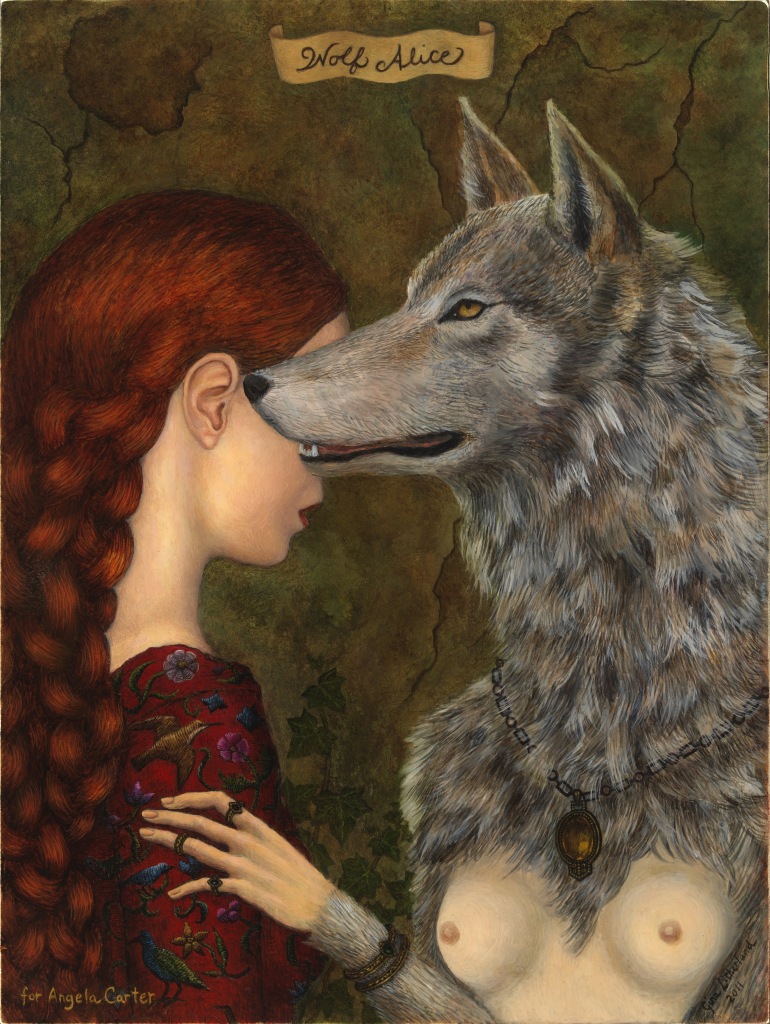 Gina Litherland, Wolf Alice (for Angela Carter), 2011. From the collection at MMoCA.

Literary scholar Martine Hennard Dutheil de la Rochère has located some of the impetus and inspiration for Carter’s most famous work, The Bloody Chamber in the subversive art that Martin Ware contributed for Carter’s 1977 translation of The Fairy Tales of Charles Perrault. She writes:

Ware’s artwork for The Fairy Tales of Charles Perrault provides an intriguing counterpoint to the translator’s understanding of the nature, purpose and readership of Perrault’s contes. In this sense, Ware’s etchings anticipate a shift in audience (from children to adults) and a concern for visuality that becomes central in The Bloody Chamber. Further, Carter adapted specific elements from Ware’s illustrations in her collection of fairytale rewritings, including visual details and strategies that she transposed to the realm of verbal narrative.

She also points out the strong visual sense of Carter’s writing. For instance, from “The Company of Wolves”:

At night, the eyes of wolves shine like candle flames, yellowish, reddish, but that is because the pupils of their eyes fatten on darkness and catch the light from your lantern to flash it back to you—red for danger; if a wolf’s eyes reflect only moonlight, then they gleam a cold and unnatural green, a mineral, a piercing color. If the benighted traveler spies those luminous, terrible sequins stitched suddenly on the black thickets, then he knows he must run, if fear has not struck him stock-still.

That passage is almost a painting itself. 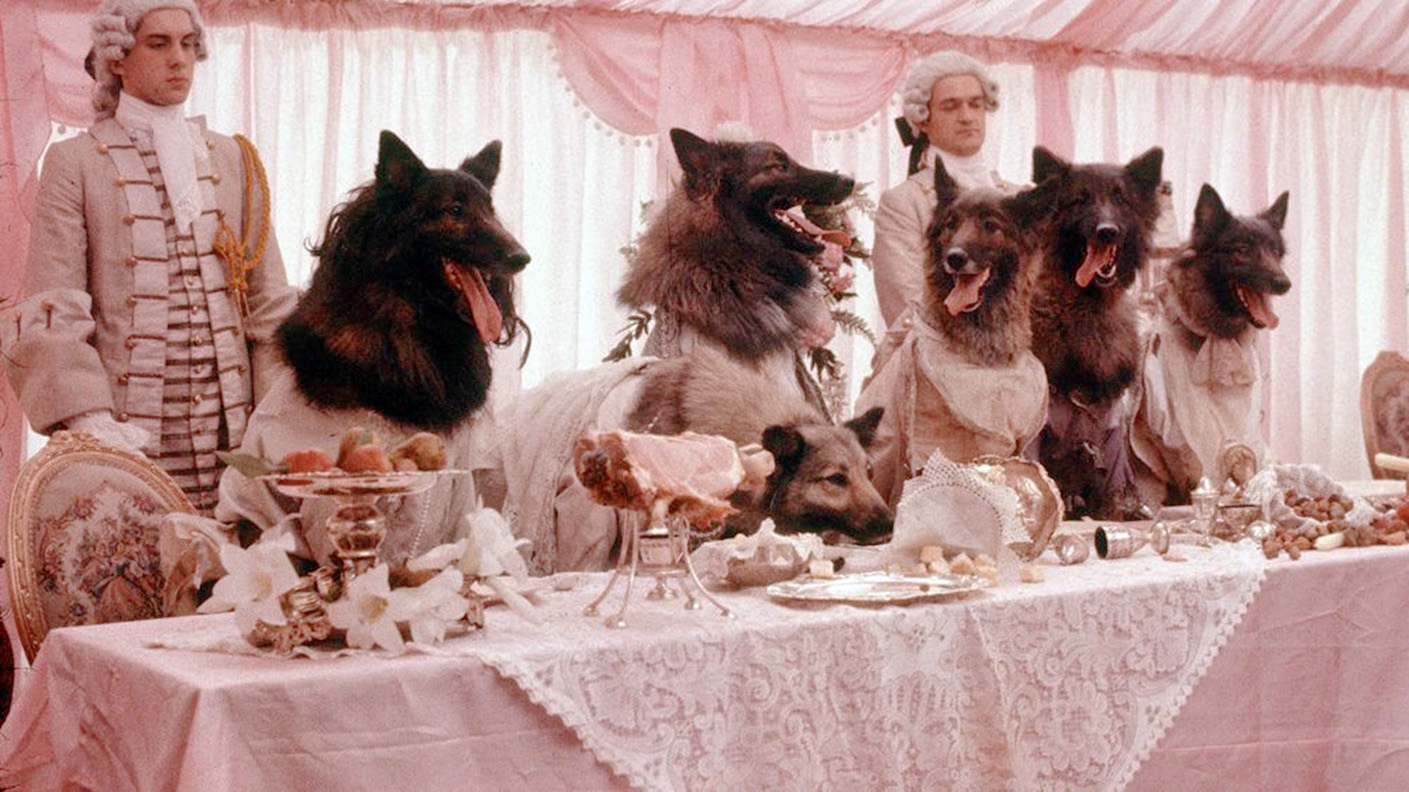 Still from the 1984 film ‘The Company of Wolves’

So this is all to say that it’s not surprising that the fairy tale, and Carter’s version of the fairy tale in particular, is so tempting to represent in visual form—from painting to cinema to performance art, as in the 2013 event organized by Art Macabre, where artists represented scenes and characters from Carter’s works in action. All literature should be interpreted and re-interpreted thus, perhaps—but I think the continuing overlap of the visual and the literary is particularly useful, transgressive and satisfying when applied to work like Carter’s, which is already concerned with what is seen, what is not seen, and the identity of the seer. 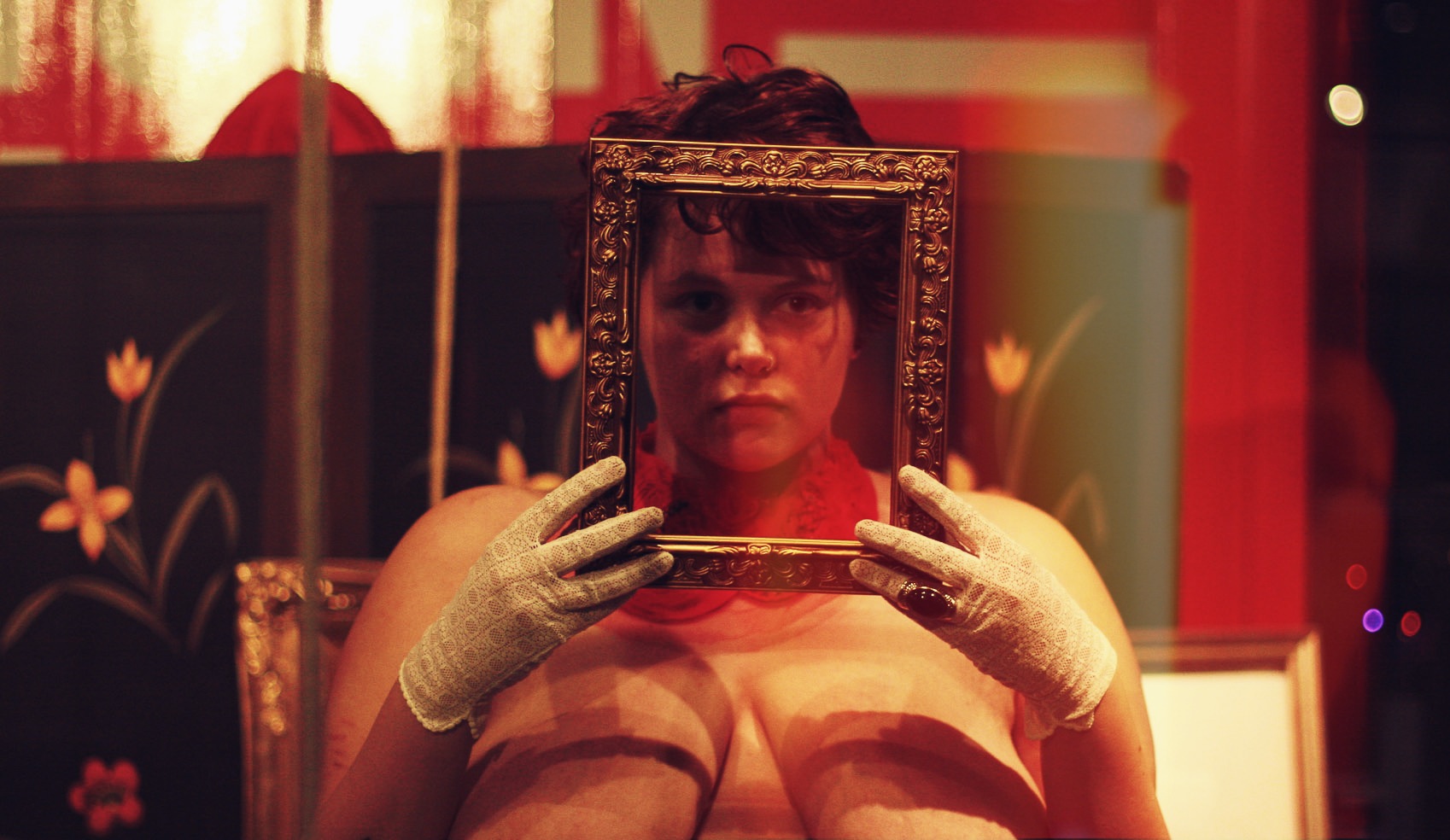 The Time Mario Puzo Wrote a Takedown of The Paris Review 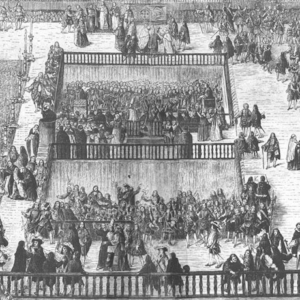 How we write about work: on Dickens, office life, and tales of the precariat in contemporary fiction. | Literary Hub ...
© LitHub
Back to top
Loading Comments...