The Wild Promises and Perennial Uncertainties of Tech

By John Rossant and Stephen Baker

How do you write about tech companies that might be bankrupt by the time your book is published? When we pitched Hop, Skip, Go: How the Mobility Revolution is Changing Our Lives in early 2018, the idea was simple. The digital economy was spreading fast into transportation. People would increasingly be moving around on networked machines, most of them electric. This would reshape the geography of movement, create a new generation of tech giants, and give us the best chance in a century to make our cities greener and more liveable.

We sold the book in March of that year. Over the following months, as we reported, it seemed as though the global investing community had read our proposal. Venture funders poured fortunes into mobility—underwriting driverless cars, electric buses and ride shares. Electric scooter companies saw their valuations soar into the billions.

The mobility market was on fire. This latest tech boom, we knew, was passing through its euphoric phase. We’d witnessed this before, with the Internet and telecom, and we’d seen how booms fade and crash. By the time of our pub date, in November of 2019, how would the companies we were writing about be faring? And how about people who picked up the paperback a year later. Would the companies we wrote about even be around?

Naturally, we gave thought to this as we picked companies to profile. The easiest path would have been to focus on the powerhouses. Waymo, for example, Google’s stablemate in the Alphabet group, is a leader in the software for autonomous cars. It has elite Artificial Intelligence scientists, strong alliances with industry, and a parent company worth nearly $1 trillion. It’s a good bet to stick around, at least for a while.

But giant companies are in the news all the time. Even if we got good access to Waymo—no sure thing—our 2018/19 reporting on the company might feel stale by the time the book came out a year later. What’s more, mobility is a global revolution, and we wanted to include international players.

So we traveled to Guangzhou, China, and spent time with researchers at Pony.AI, a China-Silicon Valley startup. In our book, we would look at the (enormous) challenges of engineering autonomous cars through the eyes of Pony.AI. They’re not as rich as some of the giants in the field. But they have strong relationships with automakers, especially in China. From their perspective, we see the rest of the industry, including behemoths like Waymo.

Whenever possible, we wanted to pick companies that had moved past the research phase, and were already engaged in the developing markets of mobility. This led us to Helsinki, Finland, where we got to know a company called MaaS Global, which sells so-called mobility subscriptions.

The idea is that we increasingly subscribe to movies and music. So why not transportation? Like Spotify or Uber, it starts app on your phone. When you punch in a destination, the app spells out the combination of tram, rideshare, taxi or subway that will get you there. All of it is  paid for by the subscription. The hope is that lots of different service companies will market these mobility apps, and that thousands of city dwellers will ditch their cars for subscriptions.

The initial boom, as we see it, is creating a vast feeding ground for new species of mobility companies.

We cannot be sure that Helsinki’s MaaS will grow into a global player, or even survive. Google’s and China’s DiDi are likely to plunge into this service market, along with lots of other players still unknown. But whoever emerges on top in this industry is sure to feed from the learnings, and maybe even the software, of the pioneers in Finland.

Some of the technologies we looked at are even more speculative. One of the companies we write about, for example, is a Torrence (Calif.) start-up, Divergent3D. It’s devising a system to manufacture cars with 3D printers, and assemble them largely with robots. This technology might revolutionize the industry, turning it from a century of mass-manufacturing to niche production, with limitless flexibility. If one of these super lightweight cars comes out of production and is not quite right, it will be easy to melt its body parts, tweak the software, and print a new one.

Chinese investors already have a Divergent3D pilot project up and running in Shanghai. The market is still unproven, but full of promise. Divergent3D gives us a window into this future, whether or not the company is around to see it.

Then there is a German aviation company, Volocopter. It manufactures Vertical Take-off and Landing (VToL) drone taxis. It’s one of dozens of players, including Boeing and Airbus, angling to create a vast market for urban flight. After all these decades, it seems, it’s time for flying drones to make good on the vision of television’s Jetsons.

However, if regulators hold up these flying pods or, worse, if a few of them crash, dozens of start-ups will run out of cash long before the market takes root.

So how to frame these companies for a pub date in late 2019? We opted or a Darwinian focus. The initial boom, as we see it, is creating a vast feeding ground for new species of mobility companies. This gives birth to an explosion of business plans, strategies, technologies and designs, many of them exotic to the point of weird. (Who would have imagined a market for electric unicycles? Yet they’re buzzing around on from Greenwich Village to Venice Beach.)

The hour of reckoning will come when the mood of the market swings from celebratory to skeptical. This is when investors tire of rosy visions and demand to see profits. The result: a vicious culling of the ecosystems, like the one we witnessed in the Dot-com crash in 2000. Back then, lots of high-flyers, like Webvan and Pets-Com, went poof. A handful of survivors, like Amazon, feasted on the spoils, and grew.

So in the book, as we travel the world, from Shanghai and LA to Helsinki, Detroit and Dubai, we get to know a host of players, and introduce them to our readers. Yet it doesn’t matter all that much—at least to those of us without skin in the game—which ones end up on top. The winners in this Darwinian drama will feast on the fallen—picking up their code, their brainpower, their customers and designs. In this way, no matter who we write about, we can be sure that they’re building this next generation of human movement, and will be a part of it—whether they survive the inevitable shakeouts ahead or succumb to them. 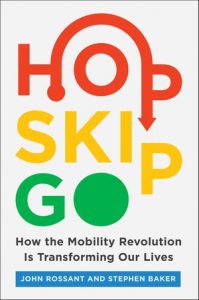 John Rossant and Stephen Baker’s Hop, Skip, Go: How the Mobility Revolution Is Transforming Our Lives is available now from Harper Business.

John Rossant is the founder and CEO of CoMotion, the Los Angeles-based event and media platform on new mobility. A former journalist and magazine editor, John held several senior editorial positions at BusinessWeek, including Europe Editor, as well as Paris, Rome and Middle East correspondent. He has received a number of prestigious awards, including the Overseas Press Club Award and the German Marshall Fund’s Peter Weitz Award for Distinguished Reporting.

Stephen Baker is author of The Numerati (Houghton Mifflin, 2008), Final Jeopardy (2011), and the dystopian novels, Dark Site and The Boost (Tor Books, 2014). For ten years, Baker was a technology writer in Paris and New York for BusinessWeek magazine. He worked earlier as a journalist in Mexico City, Caracas, and El Paso, TX. He was born outside Philadelphia and lives in Montclair, NJ. 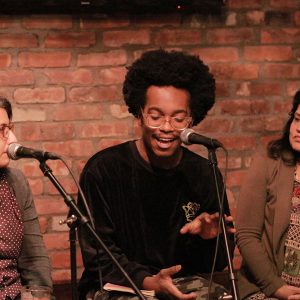