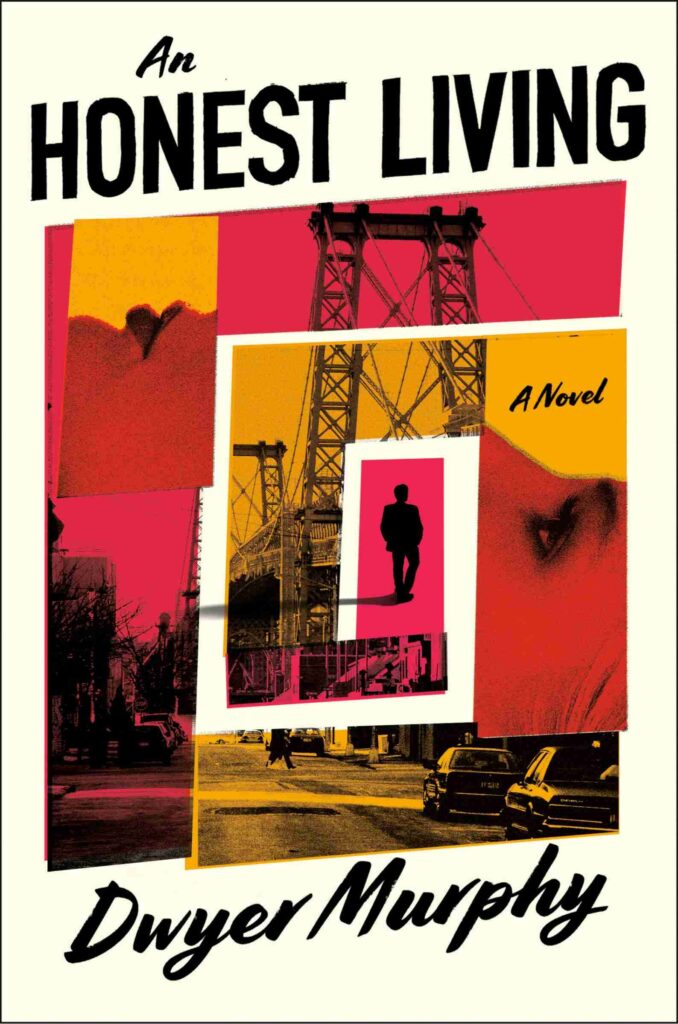 The following is from Dwyer Murphy's debut An Honest Living. An unwitting private eye gets caught up in a crime of obsession between a reclusive literary superstar and her bookseller husband, paying homage to the noir genre just as smartly as it reinvents it. Murphy practiced law at Debevoise & Plimpton and served as editor of the Columbia Law Review. His writing has appeared in The Common, Rolling Stone, Guernica, The Paris Review Daily, Electric Literature, and other publications.

It seemed at the time like the easiest money a person could make. The next day I typed a declaration and affidavit, attached Reddick’s handwritten, signed offer sheet as exhibit A, and emailed the documents to Shannon Rebholz at Rebholz and Kahn, Anna Reddick’s attorney for the divorce. Later that week, a courier showed up at my door with a sealed manila envelope. Inside was some fine stationery and another roll of hundred-­dollar bills, fifty of them. Together with the retainer, that made fifteen thousand dollars. Not a bad haul for a few hours of work. I put most of it under the mattress and promised myself I would look into the bond market straight away. With what was left, I treated Ulises Lima to a steak dinner at Peter Luger’s. I wanted to thank him for sending me such a brief, surprisingly lucrative case. He ordered the porterhouse with a baked potato and toward the end of the meal, after we’d both drunk a good deal, he was hell-­bent on making a toast. It started out as a toast about loyalty and friendship and ended with him talking about Jorge Luis Borges and his early poetry, how truly awful it was, so awful it must have been part of a long con the great man was playing on the Argentines. We spent the rest of the meal trying to figure out what the con could have been, whether it involved a fake encyclopedia like the Codex Seraphinianus or a pack of gauchos. It was one of those nights. We were happy and well fed. The work had come easily, without either of us having to search for it.

Ulises was probably my closest friend in the city at that point, but if you had asked me how we first met, I couldn’t have told you. He claimed it was in a bookshop on the Lower East Side, a place that sold paperback mysteries and anarchist literature, but he couldn’t remember the name. He had me confused with somebody else. New York was full of small, dying shops then and it could have just as easily been a record store or a luncheonette or a news kiosk. Ulises had a good, sharp mind that was always misremembering things. That was what made him a poet, he would tell you. If he had wanted to recall things in the order they occurred he would have become a detective or a lab assistant. Memories were speculative. That was his theory, anyway, and it all tied back to Borges’s poetry in a roundabout way and to some of the lesser-­read works of Roberto Bolaño, another writer Ulises admired. Bolaño died two years before, in Barcelona somewhere, supposedly of liver failure. Since then he had become fairly popular and you would sometimes see people on the subway trying to read one of his books in the original Spanish, especially 2666, the novel he wrote while waiting on a new liver that never arrived. It was all pretty inconvenient for Ulises, who had named himself after one of Bolaño’s characters. He had done it back when he first arrived in New York and had been counting on the reference remaining obscure for a long while, possibly forever. His real name was Juan Andres Henriquez Houry. Everyone called him Ulises. He had friends all over the city, a lot of unusual, interesting people.

After the steaks we went to Fortaleza Café and kept on talking about work. The regular crowd was there. Some of them Ulises knew and others were people I had done jobs for in the past, acquaintances and neighbors and the woman who ran the bakery on Graham Avenue, who the summer before had wanted to trademark a drawing of the blue stove her grandmother passed down to her, a simple case that only required a filing with the Patent and Trademark Office and earned me a lot of free muffins for a time. Warm, unruly muffins overflowing with berries. She was wearing a baggy sweater and dancing with another woman. I thought I recognized the other woman. Possibly she was a colleague from the bakery. The ends of her sleeves, around the wrists, were dusted with confectioners’ sugar. It was just after eleven and Fortaleza brought in music during the week. They didn’t charge anything at the door, they only passed around a hat. You could ignore the hat if you wanted, but Miss Daniela, who owned and managed the café and who may or may not have come from Fortaleza—I never checked—would be sitting at the bar, watching who contributed and who didn’t. Plenty didn’t, but I never saw them there again.

“You two are always working,” Miss Daniela said, when Ulises and I were sitting at the bar. She was three stools down, watching the band, which was a guitar, a drum, and a singer performing samba. Whenever a train passed overhead, crossing the Williamsburg Bridge, the band would speed up the tempo and play louder as the rattling of the tracks and the bridge’s undergirding tried to drown them out but never managed to. It was all done very naturally. They played there every Thursday night, the same band, from around nine o’clock until midnight.

Miss Daniela changed stools to get a little closer. Closer to Ulises and to the band.

Ulises told her what we were discussing. The Newton Reddick case. Borges. Divorce. She hadn’t really thought we were working—it was all a joke. She liked to tease Ulises. They were neighbors, she used to say, her from Brazil and him from Venezuela, they shared a border, why not a bed now and again, for laughs, for fun, for exercise? She wore her hair in great, old-­fashioned hives wrapped with silk scarves. In the prior year she had been fined twice for violating the city’s cabaret laws. The cabaret laws in New York were like nowhere else in the country, maybe in the world. You could only dance in a few places around town, in clubs and in the old discos, several of which were still hanging on thanks to the dancing. The fines weren’t too exorbitant, but they added up for a small place like Fortaleza, which had only ten tables, the barstools, and a kitchen out back with four burners. The city used to send plainclothes officers around on weeknights looking for violators. The cabaret laws had been designed to keep Latin and Black neighborhoods under thumb. It was enough to make a businesswoman paranoid, especially one who brought in music, samba no less. But Miss Daniela couldn’t bear to have her place any other way. I told her the next time she was fined I would fight it out for her, pro bono. She asked if Ulises would come along for the fight, pro bono, and he said that he would try, he would be honored to do it, but you can’t fight city hall. That was something he had heard once.

“You know, I’ve divorced five men,” Miss Daniela said. “Two in Brazil, three here. Every one a class act. Didn’t take anything that was mine. Didn’t hire lawyers. Just signed the papers when I brought them by. If I saw them on Sundays at church, they all tipped their hats.”

“You chose good men to divorce,” I said.

“You have to. You have to think about how it’s going to end.”

“You should have been a litigator. That’s the same thing they teach us.”

She had us all figured out. Even still, she asked if I wanted to dance with her.

“What about the fines?” I asked.

“I got my lawyer right here,” she said. She was patting Ulises on the shoulder, flirting, though he wasn’t listening to us anymore. He was talking to the waitress, a woman he knew who was a few decades younger than Miss Daniela, but what did she know about starting a marriage or carrying through a divorce? We went down to the end of the bar, Miss Daniela and I, where there was just enough space to dance between the service area and where the band was set up. The J train passed overhead and the rhythm quickened and I had no hope of keeping pace, though I worked up a good sweat trying. Miss Daniela moved gracefully. In the air you could smell the cheese balls they were always cooking and pushing out to accompany the sugary drinks. Afterward I dropped a twenty in the hat. It was a lot more than I was used to tipping, but we were celebrating the end of a good case. That was my reasoning as I dropped the bill in and watched the hat disappear.

I told her I didn’t know. Nobody could know a thing like that.

“The Benevolent Brothers’ Christmas Ball. They have it every December.”

“And none of them dancing? That’s some party.”

Maybe they did dance. I didn’t know anything about it. I hardly knew any police. Lawyers are meant to cultivate friends in the department but I could never quite bring myself to do it. I knew some FBI people, task-­force lawyers, but none of them danced, not that I ever saw. I was making up the policeman’s ball, inventing it, though it sounded like something they would do, carpooling in from Staten Island and Long Island with their wives, then driving home plastered, running into deer, and the next day, in the morning, seeing blood on their fenders or the edges of their windshields and wondering what they’d done, asking their wives, who didn’t know, calling their union reps to make sure it could be kept quiet and that nobody had reported any accidents. No, I had never seen the point of hanging around police stations trying to make a lot of friends.

“No more divorces for you,” Miss Daniela said. “You’re not cut out for that, okay?”

I agreed with her though probably we had different reasons for thinking so.

Ulises and I stayed until close and walked the waitress home, the woman he knew who was covering all ten tables by herself, working like mad, bringing around all the drinks and also the cheese balls, which were called pão de queijo. Her name was Gloria Almeida and she lived on North Eleventh, by the brewery, nearly half a mile out of the way but it didn’t matter, we wanted to see her home. There was snow in the forecast that night, but it hadn’t started falling 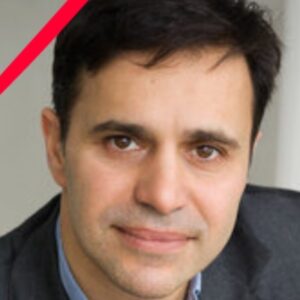 Keith Gessen on Trying (and Failing) to Be the Kind of Dad He'd Always Imagined This is Thresholds, a series of conversations with writers about experiences that completely turned them upside down, disoriented...
© LitHub
Back to top