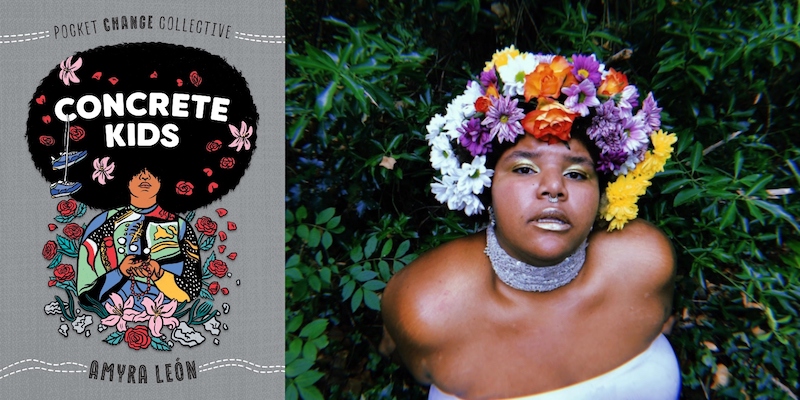 Jacke talks to Amyra León, author of the book Concrete Kids, about her background, her artistic projects, and how influences including James Baldwin, Frida Kahlo, and Frederick Douglass helped make her the person she is today. Concrete Kids is part of the Pocket Change Collective (Penguin Random House), a new pocket-sized nonfiction series centered around timely issues and written by today’s leading activists.

Jacke Wilson: So you’re growing up in this atmosphere in New York, and at some point you started reading. What books were appealing to you when you were at a young age?

Amyra León: I read a lot of poetry. I was introduced very young to Nikki Giovanni and Maya Angelou and Baldwin. Very young. My first chapter book was The Secret Garden, which I love thinking about because I was just like, who was I that I was sitting there reading The Secret Garden? I was really, really young when I read that book. But yeah, I read a lot of poetry and a lot of peers’ work as well, because I’ve been in spoken word since I was a little girl. And so spoken word has always been a huge part of my identity as a creator.

Jacke Wilson: Do you have writers in your family or any teachers or anyone who was a particular influence?

Amyra León: Yeah, in second grade. Second grade was a big year for me. I moved a few times, but I won a poetry contest. I was the second place winner; the first place was 16, and I was 7. My teacher submitted me. And after that, all of my teachers kind of celebrated me because I was celebrated, you know? I don’t know if it would’ve been the same if I didn’t win the contest; I really don’t know. But I did. And my teachers would give me blank journals, my social workers—I was a very quiet child; I was experiencing insane amounts of violence and mobility, and I was changing classrooms a lot, too, which meant that my education was all over the place. But I was really smart, so it was all good. My teachers and my social workers, everybody gave me journals and supported me in expressing myself through writing, before I allowed myself to really start speaking and performing.

I think that the biggest impact on my creativity, though, was in high school when I was introduced to Frida Kahlo. I love Frida Kahlo. Frida Kahlo’s ability to look at the intricate nature of suffering and to put it on blast, to put it right before you, to paint her miscarriages. And I’m over here, 12 years old, looking at these paintings like, holy shit, my life is so difficult, but this is okay if I’m allowing myself to look at it and to see it for what it is and to know that that is not the beginning, middle, or end of my life. It really ignited me to become the writer I am, that looks at the wound. And I always say this—I look at the wound so that we can heal from it. Because if we continue to ignore it or scrape it under the rug or say it’s water under the bridge, we may not know where the poison came from. We may not know where the anger came from. We may not know how healing can actually begin and be successful in the body if you don’t recognize these things. I know Kahlo’s a painter, but it really ignited me as a writer to be more honest and to be more transparent with what I was experiencing.

Amyra León is an author, musician, playwright, and activist. Her work transcends genre and medium, and focuses on Black liberation, politics, and communal healing. She believes that the art of listening and honest conversation are the primary tools for lasting change. Her aim is to empower communities to believe in the significance of their individual stories. The conversation has just begun. 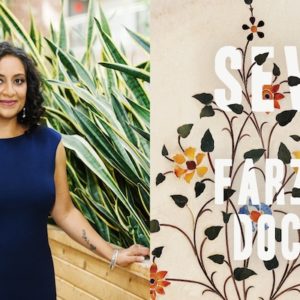 In Farzana Doctor's Seven, Sharifa and her husband, Murtuza, are spending his sabbatical year in Mumbai with their 7-year-old...
© LitHub
Back to top