In the aftermath of tragedies, people often turn to poetry—to find expression and be consoled, to grieve or rage, to remember and even reanimate the dead. The poem can also be a powerful critical blade to cut through political reverberations that hang over and distort certain events. Following September 11th, the New Yorker, for instance, published a well-known poem that includes the refrain “try to praise the mutilated world,” and since last week’s terrible news of bombings in Paris and Beirut and elsewhere, as the war machines continue on, more than one person on social media could be observed touting this very poem as a necessary response. And yet I cringe, though the public grief of an individual should not, under normal circumstances, be appropriate matter for scrutiny. But overwhelming structures and patterns? I would hope so. I say this because so often poems are quick to sentimentalize tragedy; to cheapen suffering by leaping over it. That is, to avoid the mutilated, disfigured, empty aspects of a catastrophe while emphasizing their sensational, didactic or comforting appeal.

All year poets have been intensely debating aesthetic and ethical boundaries, especially centered around questions of race and representation, but branching out to almost every aspect of identity and mode of formal experimentation imaginable. As the culture at large begins this conversation, too, in the wake of protests around college campuses, it should be remembered that no activist, no theoretician, no critic I know is advocating for an end to encountering otherness; for speaking to/across historically determined power dynamics; for re-imagining and witnessing. In Joyelle McSweeney’s excoriating elegy for a brutally murdered Mexican woman whose death underscores a global women’s issue we see little coverage about, I see no rote presentation of suffering, nor rush to evade the unsavory, difficult aspects of this very specific history. The poem is, however, terribly disturbing, uneasy making. And yet I think McSweeney—an acclaimed anthologist, essayist and teacher and publisher of politically/aesthetically challenging work—is very shrewd to foreground Baudelaire in such an elegy. His presence might, in fact, represent one too-familiar mode of aestheticizing violence that McSweeney cannot pretend to be completely detached from, even as her work importantly acknowledges a system of violence against woman that includes questions of money, labor, locality as well as histories of slavery and death. (Such acknowledgement certainly not what I associate with traditional Euro-American elegies.) Still, there is no checklist for an “appropriate” elegy, per se. But I do think in our social-media age, now more than ever, it’s humbling and humanizing to see poets of considerable gifts as hers confront crises in their complexity without succumbing to the mechanics of objectification, of rhetorical charades. Whoever you are, I dare this poem to reach you. It does not ask for your praise. Be warned: Joyelle McSweeney is a radical citizen-poet of the world.

I get my neck out for the knife scene

a green smell, a green scene,

because the nose bone’s so close to the brain bone

and the brain doesn’t have a bone

only a series of sea walls and sea barriers

and knock against the blood brain barrier

a tennis brat oaths and curses

every kind of lapsus

every slip of the tongue

flight of women chased into the sky

executed in the bathroom

on her first afternoon

the sound we call static

is really full of activity

and sending the message back

through the sea shell

to the ear canal

to beat against the heart

how long can it beat itself up

hurled at a seawall

the heart of time

from the coach of Death

made of pulp, germs and linen

the blood of slaves

the work of women

even Baudelaire in his crown of syphilis

wanted to become a clock of work

it rains, it hurts

crown of thinking, jacket of spleen

of coquettes touring the Louvre

on the arm of Baudelaire

blushing into his notebook

blushing into a squib

even a kind of cream dissolving into the soup

even a kind of t-shirt

around the torso of the teenager

who is taking a break in the grave

breaking up with her boyfriend

in her little plastic sheathe

jerking the afternoon thick as carrageen

its album of albumen

bitter secretion in the back of the mouth

all the bones lock together

and wing into the air

as a clock strikes

as a thought strikes

the rope breaks the teen plunges

into the same river

then it is gone

then it comes back

how long after eating

Joyelle McSweeney is the author of eight books, most recently the play Dead Youth, or, the Leaks (Litmus, 2014) and the critical book The Necropastoral: Poetry, Media, Occults (U. of Michigan Poets on Poetry Series, 2015). She co-edits the international press Action Books and teaches at Notre Dame.
Share:

All the Young Literary Darlings Under 35

At the 40th Anniversary of the Pushcart Prizes 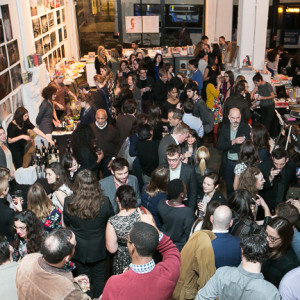 All the Young Literary Darlings Under 35 You get off the subway in Dumbo and all the good stuff is downhill. In this case, gravity leads us to PowerHouse Arena where...
© LitHub
Back to top