On the Ongoing Ascendancy of the Very Long Novel

For weeks, I’ve been carrying around a huge novel. The type of huge that exceeds 1,200 pages. Everyone, from train passengers to baristas to my boss and a not insignificant amount of people on the street, has commented on the length of it. “What is that huge book?” or “How big is that?” are questions which have defined my conversations of late. I started to think about it more: why are “big books” perceived so differently? How long have “big books” been such a phenomenon? Is it just length that makes them seem like more of a commitment? Are they of greater intellectual heft, or conversely, perceived as books in need of a good editor simply because of their size? I started to do some research, dip into some other “big books” and discovered a kind of continuum for the “big literary book.” It’s less a question of “Does size matter?” and more a consideration of “Why?” Either way, it’s a question that’s been on the mind of readers for much longer than we may realize.

In 1748, Richardson’s epistolary novel, Clarissa, was published. In 2016, a Penguin Classics edition, amounting to 1,534 pages, can be yours with just one click and arrive at your doorstep tomorrow. In 1862, Victor Hugo’s Les Miserables gripped France, England, and the United States. Today, if you can shake the musical, an update of the original English translation’s 1,488 pages can be yours for less than the price of two lattes at Starbucks. In 1869, the first translated edition of War and Peace weighed in at a respectable 1,225 pages. Today, you can choose from several different translations; whichever you pick is up to you and Janet Malcolm. At the risk of courting cliché, these huge books are passports of sorts. They can transport you to distant places, and for quite a long while.

But plenty of people argue that there isn’t time for reading big books in today’s world. Who would dare to pick up Clarissa in the age of carpal tunnel and wi-fi? As a result, these huge books have largely become vacation hopes (often dashed), scholarly projects (rarely seen in a more public way), and even library discards. And yet, the past 20 years have ushered in an entirely new and different type of Big Book—a novel that tackles our time. The great (both in scope and affect) novels of the 19th century were primarily about people responding to social mores and engaging with the world. However, those of the 20th century (and the 21st thus far) try to make sense of the world—events and entropy are set-pieces, characters are representative at best, and at worst, mere inconveniences. In the age of 24-hour news, reality TV, and snapchat, it’s as if people themselves are becoming less important while the technologies of connection continue to expand.

In 1996, David Foster Wallace’s Infinite Jest became a major sensation—all 1,088 pages of it. This was a watershed moment for post-modernism and an eerily prophetic look at modern American excess and culture. Prior to Wallace, longer novels were something of a rarity in contemporary fiction, and didn’t frequently address our times. But twenty years later, and after the sad shock of Wallace’s death, Infinite Jest has moved into that rarest of literary strata: the mere mention of the title evokes a certain understanding of its reader and author, not to mention the ambition of both. Looking back, it’s possible to see Wallace as ushering in a new era. The year following Infinite Jest‘s publication unleashed Don DeLillo’s 827-page Underworld—an astounding epic lacking parallel, and even more disturbing than Wallace’s. Time marched on—King, Stephenson, Danielewski, Martin, Clarke, Vollmann, Wroblewski, Johnson, Mantel and more have crossed blithely over the 500, 600, and 700 page mark, with some of them chugging along well past page 1,000.

In September of 2010, Garth Risk Hallberg wrote an essay for The Millions entitled “Is Big Back?” Much has happened since then: Hallberg’s own very big book has come and gone, and many of the writers discussed in that piece (Byatt, Adrian, Vollmann, Beattie, and Franzen) have released at least one new book, of varying size. For New York magazine’s Boris Kachka, 2015 was the “Year of the VLN”—Very Long Novel. What do these publications signify in an age where attention is limited and demand for it is growing exponentially and almost by the minute? I reread Kachka and Hallberg as I carried around the  “VLN” I mentioned earlier—Alan Moore’s second novel, Jerusalem. In an effort to describe his ideal reader, and the motivation behind writing such a big book, Moore said, “I don’t like this passive response to art and entertainment that seems to typify the modern era. I don’t like this thought of a massive audience of the passively entertained.” Let’s take Moore at his word.

With Jerusalem, Moore has gone farther than he ever has before, and it only took him 12 years. To be fair, he was only really writing for 11 of them. Channeling Lucia Joyce nearly made him lose his mind and forced him to take a year off the project.

A legend in the world of graphic novels, Moore is famous for taking known tropes and turning them on their heads; unrivaled imagination, research and depth of character serve as his calling cards. He has redefined our cultural notions of serial killers, antiheroes, political radicals, and even what makes us scared. Whether you’ve read them or not, you probably know of Batman: The Killing Joke, Watchmen, From Hell, The League of Extraordinary Gentlemen, or V for Vendetta. Regardless of the subject matter, Moore’s canvases are always vast and detailed, but they’ve never as broad or masterfully rendered as in Jerusalem.

What is Jerusalem? It’s an experience you can more easily press on people than explain to them. Moore’s 1,260-page second novel, Jerusalem, will land in bookstores later this month with acclaim, conjecture, and hopefully even a trumpet or two—but it’s likely that only the intrepid will take the plunge. One thing may keep, the genre fans, the curious, and even a few Moore diehards from taking the leap: length. But don’t be foolish and let that stop you. As in Roberto Bolano’s 2666, ambition, formal complexity, and expectations collide in Jerusalem, making it one of the most exciting book events of the season. Also like 2666, the book will be available in three paperback volumes or as one giant hardcover. Nearly 400 pages longer than Bolaño’s epic, Jerusalem is Moore’s life’s work—gospel, encyclopedia, Rosetta Stone, and Pandora’s box all rolled into one giant, perspective-changing novel. Jerusalem delivers.

In the way his graphic novels always do, Moore is playing for keeps, but this time with heightened ambition and a different set of references. Whereas he previously riffed on Tolkien, Doyle, and other genre writers, he’s now taken on Zola, Dickens, and other 19th-

century realist novelists. And Moore even leaves room for some 20th-century experimenting. There’s that aforementioned (and soon-to-be infamous) Lucia Joyce chapter. And another in the style of the man who broke her heart, Samuel Beckett. Somehow, in paying homage to his influences and the big novels that preceded Jerusalem, Moore still manages to break new ground.

In a recent interview with Moore for Publishers Weekly, Heather MacDonald points out that “Jerusalem is Northampton as well. A map of the center of town is printed in the endpapers, like the map in many a fantasy novel, but instead of tracking the journey through a Narnia or Westeros, it’s a world of common alleys and sordid churchyards where ordinary humans play out the intricate art of living, dying, and remembering, and an occasional dark menace—human or otherwise—appears fleetingly just beyond a garden wall.” Almost a Baedeker guide to Northampton over the centuries, Jerusalem offers a comprehensive view of the city and its myriad denizens, races, preoccupations and industries. In his usual deft way, Moore defies genre classification, weaving in strands of noir, thriller, horror, and sci-fi. In his hands, Northampton becomes a fun-house that nobody should walk through alone. It’s a compelling, thought-provoking, and yes, challenging but always engaging read.

In short, now is the perfect time to pick up Jerusalem or any of these big books. Fall is beginning in earnest, election cycles are winding down, winter is coming. It’s time to make the commitment and see how a great and ambitious novel can be wired. I dare you to make the time and devote the energy to the broad swath of humanity and narrative that only an ambitious and very long novel can tackle. What’s stopping you? Now it’s your turn to fend off the inquisitive fellow travelers and strengthen your own wrists.

Josh Zajdman works in publishing. He’s written for a few different places, is taller than he appears in pictures and doesn’t read Proust in a cork-lined room. @joshzajdman.

Introducing: Bookselling in the 21st Century 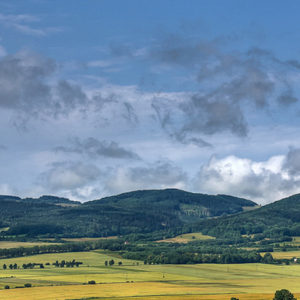 I never thought I’d go to Auschwitz. I made multiple attempts over the course of writing Mischling, but the everyday and my own inadequacies...
© LitHub
Back to top