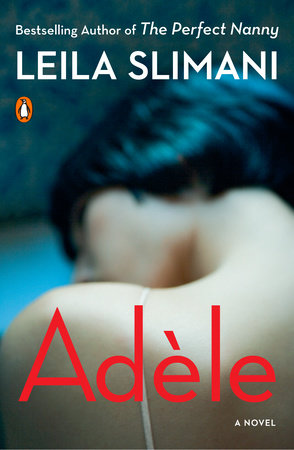 The following is from Leïla Slimani's novel Adèle. Adèle is a successful journalist with a beautiful apartment and loving family. Bored of her perfect life, she does her best to ruin it with extramarital affairs, lying to her husband and being late to work. Leïla Slimani is the author of the prizewinning, bestselling novel The Perfect Nanny. A journalist and frequent commentator on women’s and human rights, she was ranked #2 on Vanity Fair France’s annual list of The Fifty Most Influential French People in the World. She lives in Paris with her husband and children.

Adèle has been good. She has held out for a week now. She hasn’t given in. She has run twenty miles in the past four days. From Pigalle to the Champs-Elysées, from the Musée d’Orsay to Bercy. In the mornings she has gone running on the deserted banks of the Seine. At night on the Boulevard de Rochechouart and the Place de Clichy. She hasn’t touched a drop of alcohol and she has gone to bed early.

But tonight she dreamed about it and she couldn’t fall back asleep. A torrid dream that went on forever, that entered her like a breath of hot wind. Now Adèle can think of nothing else. She gets up and drinks a strong black coffee. The apartment is silent. In the kitchen she hops about restlessly. She smokes a cigarette. Standing in the shower, she wants to scratch herself, to rip her body in two. She bangs her forehead against the wall. She wants someone to grab her and smash her skull into the glass door. As soon as she shuts her eyes she hears the noises: sighs, screams, blows. A naked man panting, a woman coming. She wishes she were just an object in the midst of a horde. She wants to be devoured, sucked, swallowed whole. She wants fingers pinching her breasts, teeth digging into her belly. She wants to be a doll in an ogre’s garden.

She doesn’t wake anyone. She gets dressed in the dark and does not say goodbye. She is too agitated to smile or have a conversation. Adèle leaves the building and walks the empty streets. Head down and nauseous, she descends the stairs of the Jules-Joffrin metro station. On the platform a mouse runs across her boot and startles her. In the carriage, Adèle looks around. A man in a cheap suit is watching her. He has badly shined shoes with pointed tips. He’s ugly. He might do. So might that student with his arm around his girlfriend, kissing her neck. Or that middle-aged man standing by the window who reads his book and doesn’t even glance at her.

She picks up a day-old newspaper from the seat opposite. She turns the pages. The headlines blur, she can’t concentrate. Exasperated, she puts it down. She can’t stay here. Her heart is banging hard in her chest, she’s suffocating. She loosens her scarf, unwinds it from around her sweat-soaked neck and drops it in an empty seat. She stands up, unbuttons her coat. Holding on to the door handle, her legs shaken by tremors, she is ready to jump.

She’s forgotten her telephone. She sits down again and empties her handbag. A powder compact falls to the floor. She tugs at a bra strap entwined with earbuds. Seeing the bra, she tells herself she needs to be more careful. She can’t have forgotten her phone. If she has, she’ll have to go back home, come up with an excuse. But no, here it is. It was there all the time, she just didn’t see it. She tidies her handbag. She has the feeling that everyone is staring at her. That the whole carriage is sneering at her panic, her burning cheeks. She opens the little flip phone and laughs when she sees the first name.

It’s no use anyway.

Wanting to is the same as giving in. The dam has been breached. What good would it do to hold back now? Life wouldn’t be any better. She’s thinking like a drug addict, like a gambler. She’s been so pleased with herself for not yielding to temptation for a few days that she has forgotten about the danger. She gets to her feet, lifts the sticky latch, the door opens.

She pushes her way through the crowd that swells like a wave around the carriage and gushes inside. Adèle looks for the exit. Boulevard des Capucines. She starts to run. Let him be there, let him be there. Outside the storefront windows she hesitates. She could catch the metro here: Line 9 would take her directly to the office, she’d be there in time for the editorial meeting. She paces around the metro entrance, lights a cigarette. She presses her handbag to her body. Some Romanian women in headscarves have spotted her. They advance toward her, holding out their stupid petition. Adèle rushes off. She

enters Rue la Fayette in a trance, gets lost and has to retrace her steps. Rue Bleue. She types in the code and goes inside, runs upstairs to the second floor and knocks on the heavy wooden door.

“Adèle…” Adam smiles. His eyes are puffy with sleep and he’s naked.

“Don’t speak.” Adèle takes off her coat and throws herself at him. “Please.”

“You could call, you know… It’s not even eight yet…” Adèle is already naked. She scratches his neck, pulls his hair. He doesn’t care. He’s hard. He shoves her violently, slaps her face. She grabs his dick and pushes it inside her. Up against the wall, she feels him enter and her anxieties dissolve. Her sensations return. Her soul is lighter, her head an empty space. She grips Adam’s arse and drives him into her angrily, ever faster. She is possessed, in a fever, desperately trying to reach another

She knows this body and that annoys her. It’s too simple, too mechanical. Her surprise arrival did not transform Adam. Their lovemaking is not obscene enough or tender enough. She puts Adam’s hands on her breasts, tries to forget that it’s him. She closes her eyes and imagines that he’s forcing her.

Already he is somewhere else. His jaw tenses. He turns her around. As always, he pushes Adèle’s head down toward the floor with his right hand and grabs her hip with his left. He thrusts hard, he groans, he comes.

Adam tends to get carried away.

Adèle gets dressed with her back to him. She’s embarrassed at him seeing her naked.

He smokes a cigarette, leaning against the kitchen door. With one hand, he touches the condom hanging from the end of his penis. Adèle looks away.

“I can’t find my scarf. Have you seen it? It’s grey cashmere. I’m really fond of it.”

From Adèle. Used with permission of Penguin Books. Copyright © 2019 by Leïla Slimani.

Literary Disco: How Does the Story of Tarzan Stand Up Today?

Reading Across America: Have Your Poetry and Eat It, Too 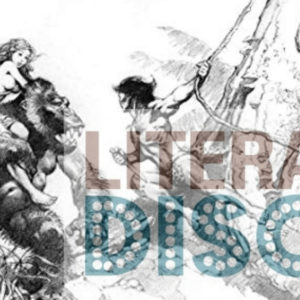 Literary Disco: How Does the Story of Tarzan Stand Up Today? Welcome to 2019, the perfect year to dive into the classic tale of... Tarzan! Ok, the first Tarzan was published in 1912,...
© LitHub
Back to top