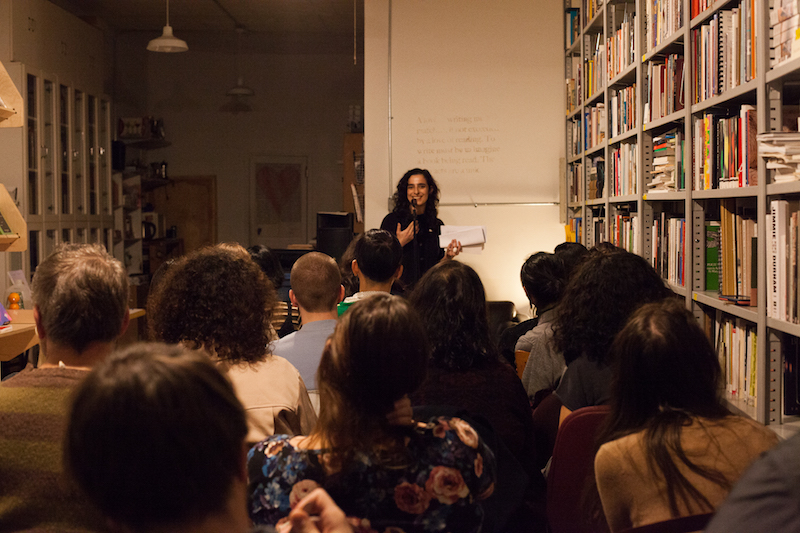 Reading Across America: Have Your Poetry and Eat It, Too

The Reading Series That Combines Poetry, Memories, and Food

The only worthy reason to leave my warm, cozy apartment on the first rainy weekend of December was in the pursuit of poetry. I was looking for an event that was lived and embodied, beyond a literary experience.

Thankfully, I found it in Tender Table.

A storytelling/reading series about food and identity for women and non-binary individuals identifying as black, indigenous, or people of color, Tender Table hosted its first event in Brooklyn on December 1.

Usually held in Portland, Oregon and Providence, Rhode Island, Tender Table was launched on the West Coast, when series founder Stacey Tran, a poet and Portland native, was pondering how to locate, cultivate, and preserve safe spaces after the 2016 election.

“There was a group of people, we’d cook for each other and tell stories. There were so many rich stories about the food that it became a great, inclusive way to bring the people in the community together—not just poets, writers, and artists, anyone could come to this space,” Tran explained.

Tran realized that she wanted to formalize these gatherings and create an open and inclusive space that was different from her hometown’s white-leaning literary scene. Fostering that environment proved necessary, especially over the past two tumultuous years. As Tran pointed out, “Portland is branded as a progressive city, but there’s still a lot of problematic activity. You’ve got white chefs presenting Thai food to white people. When I was gathering people of color who have lived in Portland for a while or were new to Portland, they felt a need for these spaces to exist.” 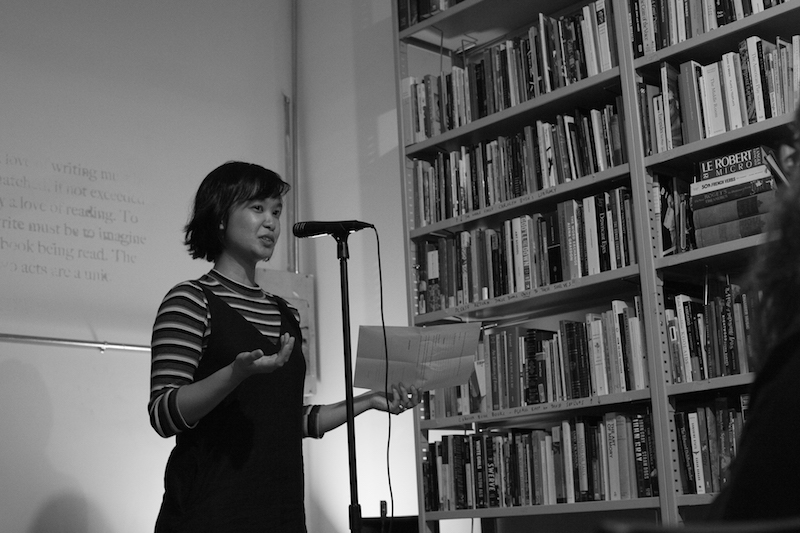 Tran wanted to allow poetry to become a platform for storytelling and community, and childhood memories of family gatherings inspired her to incorporate food into the readings.“It was the food my parents cooked and shared in our family that reignited these memories most potently.”

Her parents had insisted on mandatory, nightly family dinners. At dinner, her parents would share stories about growing up in Vietnam, the trauma they experienced as refugees in Malaysia, and the challenges and triumphs they faced as immigrants to the U.S. and Canada in the 1980s.

The first Tender Table was held in late February 2017, at the Independent Publishing Resource Centerin Portland, a community space that Tran credits for introducing her to Portland’s poetry scene.

Although Tran originally conceived of Tender Table as a pop-up series, it was immediately clear that the reading series served up a sense of community that was missing from Portland’s literary scene.

“People really saw themselves in the speakers and those who were showing up, gathering around and discovering that there aren’t that many people of color in Portland, but we’re here and having a sense of solidarity. Visibility is extremely important, especially in a city of over 80% white people,” Tran said. While everyone is welcome to attend, the audience is mostly made up of people of color; including many who are queer or transgender. 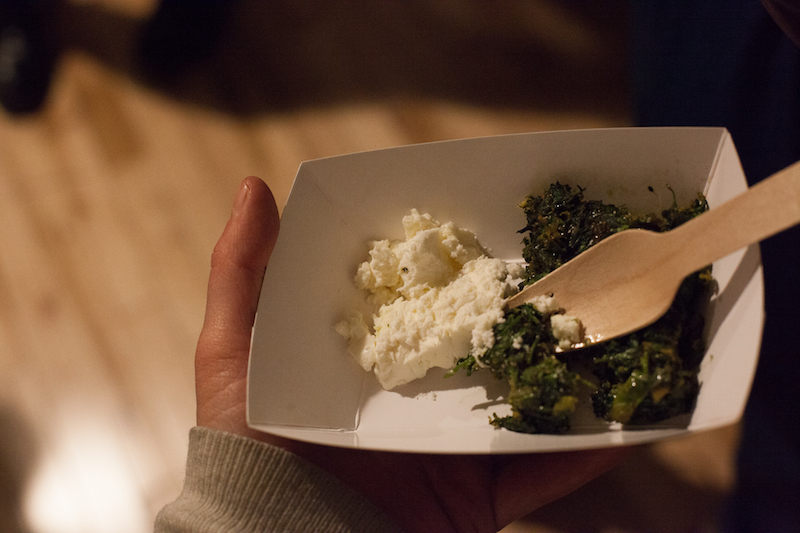 The community quickly grew—both on social media and in person. Over sixty presenters have been featured at the reading series, including Tran’s mother, who spoke about being a Vietnamese refugee and served Tran’s favorite dessert—sâm bổ lượng, a sweet drink made with seaweed. Tran’s parents harvested the seaweed themselves off the coast of Oregon.

“It was really powerful; English is not her first language, and I really loved to see that my mom was being celebrated by a community of people she doesn’t even know. She was seen and heard, and I don’t know how many opportunities she’s had to tell her story on a platform like that,” Tran recalled.

The sliding scale donation process enables speakers to be paid, usually $50 to $100. And Tran has received grants from Oregon’s Regional Arts and Culture Council and the Brown Arts Initiative. Tran’s friends stepped up to run the series in Portland when she moved to Providence to begin her MFA in poetry at Brown.

Tender Table thrives in places that generate closeness: small, intimate venues. Crowds, therefore, are usually capped through RSVPs at sixty to seventy people. Every reader begins by introducing themselves, then narrating their relationship to food, memory, culture, and family, serving a dish with personal significance while they read.

Out of the rainy weather, the warmth of the room drew me in. The scent of fresh dill lingered in the air, as the crowd of 20 or 30 settled into chairs, and, despite it being December, the air felt fresh and new, like spring. 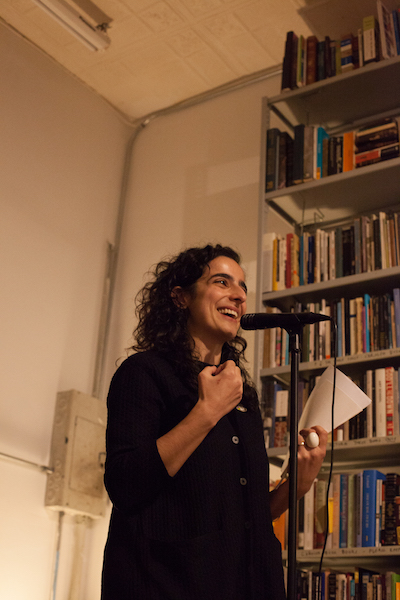 Tran gave a quiet, unblinking introduction, and the mood felt serious and sacred. Gregorian, an artist and poet, read first; she has the bright eyes that I usually find in elementary school teachers, people who still have a youthful spark.

A new mother in her early thirties, Gregorian spoke of her Iranian-Armenian family and her recent visit to Armenia, where she found herself passing up the traditional meals offered to her and frequenting a Persian restaurant instead. “As it turned out, I didn’t really like the food they were serving in restaurants there,” she said, laughing.

She served the audience slices of kuku sabzi—beaten eggs cooked with dill and greens, traditionally served on Iranian Nowruz, a celebration of spring and the New Year.

“I cannot separate the smell of food from the language of my family,” Gregorian said, as she began her reading. She had a coffee brooch, a simple, ceramic steaming mug, pinned to her sweater, and, in her poetry, there is coffee: the Armenian kind, so thick that when you finish, you flip the glass over to read your fortune.

When Stacey took the stage, the smell of citrus filled the air. “I feel like I’m in a trance,” she said, pedaling back and forth in the aisles and dropping clementines into our open hands, two at a time. 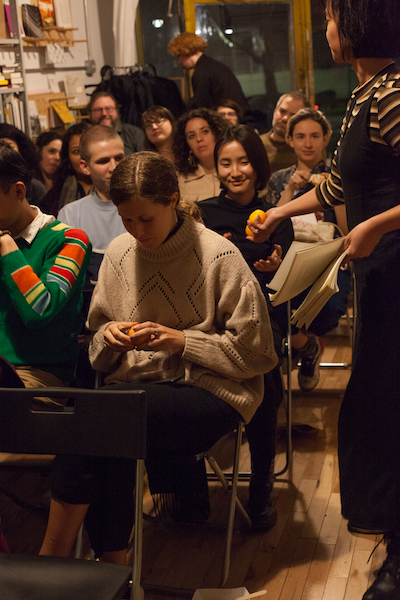 “I thought I’d roll them around on the floor,” she told us. “But then I realized that was unhygienic.” The audience laughed

Tran’s poetry evoked passing moments in the grocery store and in her parents’ kitchen, along with a love so sensual I could feel it on my tongue.

The audience, chewing, was silent and rapt.

“The way Tender Table is formatted now, it kind of reminds me of watching someone cook—you’re just there, as they’re washing the lettuce, pouring the wine, chopping the almonds. I want the feeling to be watching their stories, watching them make a meal for me,” Tran said.

I left Wendy’s Subway and headed back into the anonymity of the rainy New York night, sated, happy, and rejuvenated. Citrus and dill lingered on my clothing, and I could sense the clementines reverberating, echoing through the evening air.

Laura Winnick is a middle grades librarian attempting to get tweens excited about critical media literacy, zines, and reading. Her Pushcart Prize-nominated fiction, book reviews, and essays have appeared or are forthcoming from VICE's Broadly, i-D Magazine, Women's Review of Books, and Digging Through the Fat Press. 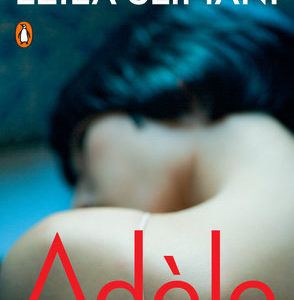 Adèle has been good. She has held out for a week now. She hasn’t given in. She has run twenty miles in the past four days....
© LitHub
Back to top
Loading Comments...