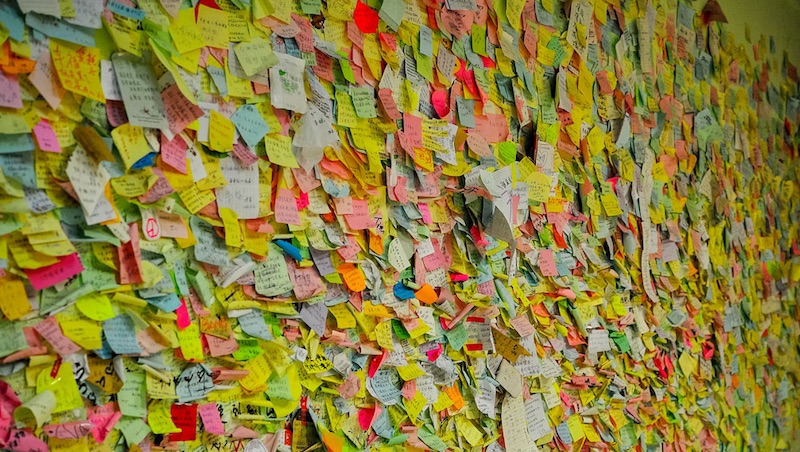 I have a precise memory of that time: I’m twenty-six, it’s late summer, and my husband and I are walking up a rare hill near Syracuse University when I explain that 500 words a day will finish the novel I’ve just begun by the end of winter. The sun is warm, we are young, and I am certain.

I was new to writing. I’d been invited into Douglas Unger’s workshop to learn alongside graduate students who’d known their whole lives they would be writers. In those early days, words spilled effortlessly onto my accumulating pages and I workshopped a 70-page story. One night, Doug said that a writer must learn to love revising as much as writing. He said it as an aside, but I copied the adage into my notebook. The possibility was unimaginable.

Winter arrived. The semester ended, a new one began, and on time went. Eventually, the effortless stream of pages came to an end and I’d produced a draft of my novel. I had it bound at Kinkos, intuiting that it needed all the help it could get. That was the beginning.

There were many winters and many drafts, and I was repeatedly surprised to find my novel out of reach. I read an essay in which a writer jumps up and down on his manuscript when it is returned from a publisher, and when I receive feedback from a fellow writer who asks, “Are you writing a novel or a novella?” I want to do the same.

Three years in, I decided my draft was organic, alive, and I’d been tasked to tame it. I took out the kitchen scissors and cut it up into hundreds of pieces. A sentence here, a paragraph there, a scene of three or five pages held together with a paperclip. I laid out the fragments like puzzle pieces on the floor of our empty living room, hoping that there, they would cohere, like sand and water melting into glass. First, I sorted the oddly shaped fragments by point of view. Second, I re-ordered the narrative by plot line. Third, I arranged it into chronological order. It didn’t matter what I did, my novel would not fall into place.

I woke up one morning to the sun shining just so on the latest arrangement of my draft and imagined myself hopscotching to the answer. I gathered up the fragments and wrote another draft, then two or three more. By then hundreds of scenes had been cut and pasted, our living room floor covered and cleared a few times more.

One day, I recalled Doug’s adage and accepted defeat. I put the draft away unfinished and, I feared, for good. Fifteen years into the future, that work would turn into two novels, completed six years apart.

Meanwhile, I began another novel as an experiment. Could I limit a narrative to a single year? A decade? To a lone flashback? Six? One family? A single city? I detailed parameters on single sheets of paper and imagined scenes in columns alongside them. Seeing parameters in black ink helped my novel take shape. One baby had arrived by then, and then another, and with them in the house, I felt the space in my head contract, like the floor space in our living room.

These days, I’m more likely to focus on the hopefulness of revision rather than the sense of failure it once evoked.

I sat at the dining room table and compressed my draft into one line scenes on index cards. I shuffled time and space and, at least, felt the power of holding the entire story in my hands at once. The possibility that structure could be seen in one sweep and yet differently freed me. I laid out the cards on my bed again and again, gaining confidence and certainty of what would go where and why, learning how to build tension, and finally, a novel.

When that novel was finished and yet another was started, and one of our children was older, perhaps thirteen, he came into our bedroom to say goodnight, and when I didn’t look up fast enough from a trail of index cards, he yanked at the bedcover and my cards flew to the ground. I felt the world I had so carefully constructed break apart, and it seemed impossible to right. I didn’t realize it that night, but he did me a favor. I was forced to order time and space anew, and what I tried to organize on a legal pad coalesced around a new and more cohesive center.

By the time I wrote We Take Our Cities with Us: A Memoir, our sons were adults, and like the space inside my head, the living room was wide open again. I’d learned to begin with structure and an organizing principle—cities, in this case—to keep the narrative under control. But when I printed an early draft on single-sided pages, I saw that all was not right, so I brought out the kitchen scissors.

I spent a weekend cutting the draft into mini-scenes, some merely a line or two. I spread them across the living room floor knowing I had no children at home to mind. My husband and I tip-toed around the long row for days as if the architecture of my world was a house of cards and without it my story might dissolve.

One morning, as an experiment, I rearranged the scenes in chronological order and color coded cities and decades with Post-its. Vienna was purple, Islamabad was green, and soon, years fell into piles, and the piles into columns of decades. The reach of time surprised me. The earliest decade was the 1920s; one century and several feet away lay 2020 and today.

Today was not a column, though; it resembled a fan off on its own, because organizing the present was impossible. In the geometrics of color, I saw that my story did not move from city to city in an orderly progression like the second hand on a clock. Cities, like memories, lived side by side on the page, just as they lived in me. Lahore, Maastricht, and Ithaca converged in the same paragraph, as if borders were immaterial, and I began again.

I envy the writer who starts with an outline, fixed and exact, who embarks on a journey always knowing where she is going.

The Monday after I finish my manuscript, I tackle the mess on my desk. I start with notes written on the backs of envelopes and save them all. I sort through papers scribbled with names and dates and add them to a folder marked Genealogy. I find a note from a museum archivist and add it to Paintings, I slide my mother’s letters into my father’s, which is where I first found them, and return a paperback The Hunger Winter to its place on a shelf with books on Holland.

Eventually, my desk is tidy, but my study is not. The walls and door are covered with peculiar wallpaper. Everywhere I look, I’m surrounded by my imaginary world, as if the memoir had been a joint effort, and the desk, walls, and door fortified what I built on the page.

The timeline of the man’s life on the back of my door is jagged and incomplete, like memory and research. It is the journey of my great grandfather, Charles Haenen, who was born at the very top, in Maastricht, and died at the bottom, in Amsterdam. A gallery of black and white photographs hangs behind my computer screen. My mother is nineteen in one, standing on the SS Rotterdam and about to sail to the US. In another image, a museum-like living room is filled with paintings, which I have hunted for in museum archives.

The map of my manuscript is within reach on my window wall. The pink column of Post-its lists chapters: Ithaca, Lahore, Vienna, Islamabad, Syracuse, Amsterdam, Maastricht. The story unfolds in rows, one square after the other. Some Post-its have moved like the cursor on my screen from one row to the next, up and down, sometimes only to return to where they began, as if by their design, not mine. One such scene hangs limply because it has moved so often and I smooth it down for the last time.

Sitting at the newly cleared desk, I wonder what I might have made of my road map had it arrived simultaneously with the idea for the book. I envy the writer who starts with an outline, fixed and exact, who embarks on a journey always knowing where she is going and where she has been. If only, I think, and then I catch myself. Although my map, changeling that it has been, is the only route to the book I’ve written, I would not have known how to read it without understanding the necessity of that route and no other, the countless possibilities tried and discarded along the way.

We find our own ways into and through the books we write, but the journey always involves opening ourselves up to possibilities. We experiment with a different word, a shorter line of dialogue, an additional scene, a new beginning until we stumble on the combination that best serves our story. In doing so, we see, we see again, we see differently. We reconceptualize.

As a beginning writer in that Syracuse classroom, I was a long way from understanding revision as re-conceptualizing or imagining that seeing anew might involve unmaking. It took time, but I was aided by kitchen scissors that hacked apart my drafts and bright colors that fused the pieces back together. Seeing my drafts on floors and walls made the difference.

These days, I’m more likely to focus on the hopefulness of revision rather than the sense of failure it once evoked. In the space that confronts us between pen and page, and one word or chapter to the next, lie myriad possibilities, one of which will be what is needed. Revising made my books—and makes all our books—possible. I may not be in love with revision, but I have made peace with it. 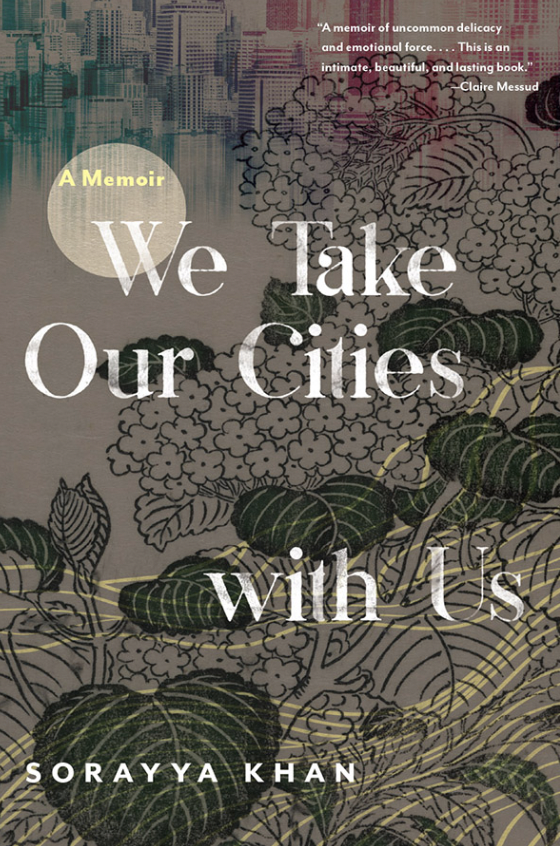 Sorayya Khan’s We Take Our Cities with Us is available from Mad Creek Books. 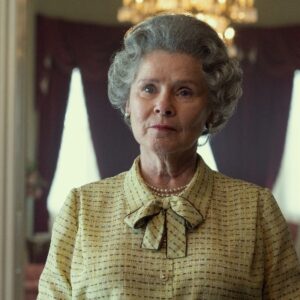 My favorite episode from Season 3 of Netflix’s period drama series The Crown is called “Moondust.” It depicts Prince...
© LitHub
Back to top
Loading Comments...