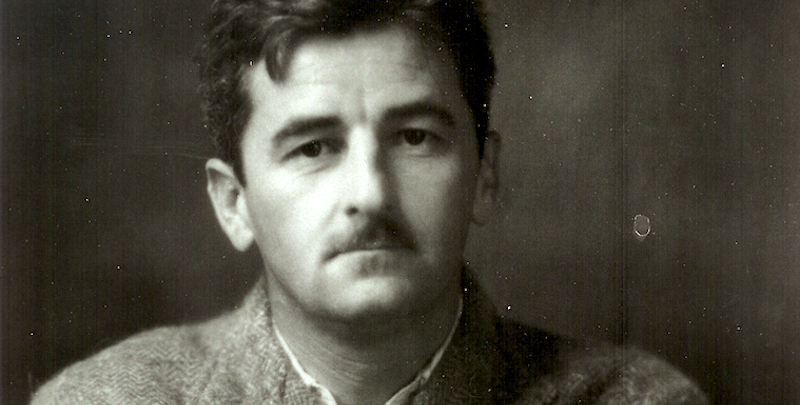 About all those unproduced screenplays William Faulkner wrote . . .

The world knows William Faulkner chiefly as a novelist, but for over a decade, his main trade was screenwriting. In May 1932, Faulkner was broke: his publisher, Cape & Smith, had gone bankrupt, and the money he’d been expecting for his novel Sanctuary was nowhere to be found. When he learned that talent agent Leland Hayward had gotten him a contract writing scripts for MGM, Faulkner leaped at the chance. Though he was initially intimidated by the industry (an often-told anecdote relates Faulkner’s disappointment upon learning he wouldn’t be writing for Mickey Mouse), Faulkner immediately lucked into a collaboration with director Howard Hawks, resulting in the popular movie Today We Live and an ongoing working relationship.

Working for MGM and then Warner Bros., Faulkner had a hand in some bona fide hits: among other films, he worked on The Big Sleep; Gunga Din; and To Have and Have Not. But gradually, he grew discouraged that so many of his films never got made, partially because Hawks had a reputation for going over budget on his movies, partially because . . . you know, Hollywood. His reputation had gradually faded, resulting in worse pay when he started at Warner Bros. in 1942. In a 1945 letter asking for formal release from his Warner Bros. contract, Faulkner wrote that screenwriting “was not his forte,” and that he “don’t dare mis-spend any more of [his time].” (Smart call on his part: five years later, he won the Nobel.)

But despite his lifelong self-deprecation regarding his screenwriting and his ultimate exit from the industry, Faulkner was a screenwriter—he wrote over fifty screenplays, and his distinctive literary style and conceptual preoccupations were reflected in his screenwriting. Reading over the synopses of his work that never made it to the screen, it’s heartening to see his style morph and develop—and it speaks to all the work by “the greats” we never get to see.

Without further ado, here are the unproduced screenplays Faulkner wrote (not including his many unwritten treatments and scripts he simply punched up):

In 1926, Major Elliot White Springs and Merlin Taylor wrote a film treatment of the newly released diary of deceased WWI aviator John MacGavock Grider, but it was shelved due to its unrealistic love triangle focus. Seven years later, Faulkner tried his hand at adapting the diary, keeping the protagonist alive and blending the source text with his own characters, the Sartoris family from his novel Flags in the Dust.

Based on Faulkner’s story “Honor”, the treatment for this film was written by Harry Behn; the screenplay was co-authored by Faulkner, Behn and Jules Furthman.

Not much is known about this 110-page screenplay, which Faulkner wrote for MGM.

Franklin Roosevelt initially suggested this film’s concept—a glorifying biopic of General Charles de Gaulle and his Free French forces—to Jack Warner, as he wanted to bolster de Gaulle’s reputation. Warner passed the concept off to Faulkner the day Faulkner arrived at Warner Bros. Unfortunately, Faulkner got caught up in an arduous series of edits trying to please de Gaulle’s Hollywood consultant, Henri Diamant-Berger, who wrote 19-page letters about the script’s flaws and inaccuracies in regards to French custom and the heroism of de Gaulle. When Faulkner finally finished the script to Diamant-Berger’s liking, the script was shelved—by then, Roosevelt was bored of de Gaulle. Timing!

Faulkner’s film adaptation of his own novel Absalom, Absalom!, cowritten with independent director Dudley Murphy, bore little resemblance to the novel itself and stayed unproduced.

Faulkner wrote a 55-page treatment adapting Country Lawyer, Bellamy Partridge’s book of vignettes remembering his lawyer father Samuel. Faulkner was the sixth writer assigned this task by Warner Bros.; he moved the setting from Phelps, New York to his own setting, Jefferson, Mississippi. The two families the Country Lawyer outline centers on closely resemble Faulkner’s Sartoris and Snopes families in his fiction. In the 1980s, the Country Lawyer treatment was published with two other of Faulkner’s treatments—The Life and Death of a Bomber and The Damned Don’t Cry.

Battle Cry was conceived as an “epic film with separate chapters depicting American, British, French, Russian, Chinese and Greek resistance to the Axis powers on various fronts”; Hawks and Faulkner wrote the treatment for the film together. The film was meant to be Hawks’s big military film, but at the final stages of writing, Warner Bros. refused to approve Hawks’s multi-million dollar budget. It pays to have a frugal reputation!

Assigned to adapt Irina Karlova’s vampire novel Dreadful Hollow for the screen by Howard Hawks, Faulkner, in Faulkner fashion, emphasized the main vampire’s lesbianism and reworked the ending to seem like a rape-like punishment for her sexuality. Wrote Jack Warner to Hawks in 1954, “Unless we get a film about an important subject, we would not want to make a deal at this time. We believe stories such as Dreadful Hollow . . . would be a waste of time.”

Last year, professor Carl Rollyson discovered the typed screenplay Angel’s Flight among other Faulkner-related material in the Academy of Motion Picture Arts and Sciences’s archive. It appears Faulkner co-authored the script with incredibly named screenwriter Buzz Bezzerides in the hopes Hawks would buy it; it’s not currently known why Hawks didn’t bite. The script is a courtroom thriller about a juror, Vera Morgan, who tries to exonerate a man she believes is innocent of murder—only to be pursued by the real killer.