Abigail Tarttelin: ‘An Eye For an Eye Makes the Whole World Blind’

Abigail Tarttelin is the guest. Her new novel, Dead Girls, is available from Rare Bird Books. It was the official November pick of The Nervous Breakdown Book Club. This is Abigail’s second time on the program. She first appeared in Episode 194 on July 28, 2013.

Tarttelin is also the author of Golden Boy, “a grippingly innovative” coming-of-age novel with a “radical non-binary, pro-intersex message” (Autostraddle). Golden Boy is the winner of an Alex Award from the American Library Association, a LAMBDA Literary Award Finalist for Best LGBT Debut, a Booklist Top Ten First Novel of 2013, a School Library Journal Best Book of 2013, and is published in eight languages.

Abigail Tarttelin: I think an eye for an eye makes the whole world blind. It’s really hard to get there emotionally as a human being when you’ve been wronged. … These crimes that are so horrifying, that you feel really emotional about them, and your response is childish in a way. I used to have this Instagram name @CivilizedAnimal because we’re all animals, and that’s how we instinctively react. To order to live in a civilized society, you have to change your behavior. We’re not instinctively civilized. This is something that we decided to be.

In a civilization, what you do is you think, what’s best for the civilization? You can’t take an eye for an eye. You have to think, what’s a productive way to deal with a criminal? Obviously, it’s to put them in a cell, give them access to an education, and send them away to give back.

Brad Listi: I think most people, to a lesser extent, are redeemable. You may have to do some more work with some than others to get them to a place where they can cope emotionally and function, but what are the alternatives, right? If you leave them in a cell to think it over, it’s likely not going to fix itself.

Abigail: It’s not very compassionate either. Most crime isn’t this extremely violent crime … I’ve never committed such a crime, but I had a really good upbringing and a great family. I feel very supported. Most people who end up in prison weren’t supported and didn’t have a great family.

Abigail: I’m really obsessed with authenticity, in life and in books. I want to be as authentic as possible when I’m talking about something. I really didn’t feel that I could talk about boys and girls growing up today. Social media has changed people’s landscapes so much. I have teenage cousins—I am the oldest grandchild on my dad’s side—so I have cousins that are twenty-two down to fifteen, and some of their experiences are similar to mine. But I can’t imagine growing up with social media, so I set the book in 1999. I don’t want to speak for girls who are girls today. I want to encourage them to speak for themselves. This is about my girlhood, and I hope it will encourage others to consider their own eleven-year-old selves as worthy protagonists of dramatic horror stories where she is the captain of her own ship. 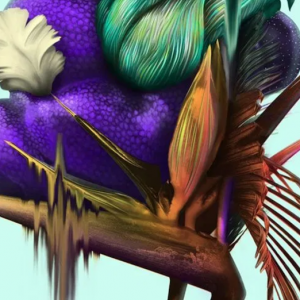 It was announced today that Jeff VanderMeer's Borne universe novels have been optioned for development by AMC. This is auspicious...
© LitHub
Back to top