The Story of a Missionary Who Stayed

In the summer of 1937 in Shanxi Province in North China, my grandmother, an American widow and the mother of a teenage son, swept invading Japanese soldiers off her front porch with a broom. I’ve tried to picture it: the soldiers in their khaki uniforms, sabers and pistols tucked into their belts, and my grandmother with her weapon of choice, a broom. Nothing could be more fitting than her use of that tool of everyday domesticity, which in the end would be the death of her.

In 1909, at the young age of 25, Gertrude Chaney traveled to China where she met my grandfather, the Reverend Watts Orson Pye, and they married in 1915. On the inhospitable plains and in the mountain hamlets of North China, the Reverend founded churches, built a library, a hospital, and roads, and converted thousands of Chinese to Christianity before his untimely death in 1926. He left behind his young widow and a five-year-old son, my father, Lucian Pye.

Gertrude and her family had experienced another loss only a year before: her first surviving child had died at the age of seven. Little Mary Elizabeth and her father were both “sent home to Jesus” and buried out in the dusty, desolate countryside of North China. Her family back home in Ohio expected Gertrude to return to civilization post haste after these two tragic deaths, but instead, she decided to remain in China, not just for months, or years, but decades.

Gertrude raised my father in North China under the Japanese occupation. With the start of the Second Sino-Japanese War in 1937, when foreigners were strongly encouraged to leave, she stayed. When Lucian went off to college in America in 1939, she stayed. Only after Pearl Harbor was she forced to relent and finally return to the U.S. Why would a single American woman stay in a war zone, I have asked myself? Why would she remain long after her entire family had gone on to the other side or stateside?

In my novel, Dreams of the Red Phoenix, I try to answer that question in the way I know best: through the imaginative lens of fiction. I believe she stayed because of moments like that one when she swept the Japanese off her front porch with a broom. I picture her standing firm, a stocky, sturdy, strong woman who pulled back her shoulders, tucked in her chin, and faced the foe. She had survived extreme famine and drought during the year my father was born in 1921. She had survived the loss of several babies to miscarriage and death in childbirth, as well as the loss of her beloved young daughter, whose golden locks she preserved, and which sit in a bowl on my desk as a reminder of our family’s history. And she survived the loss of her much-admired husband, the man whose long stride had led her and so many others forward for a time. Those Japanese soldiers must have seemed like so much flotsam and jetsam to her when they stood on her floorboards. Sweep them off, she must! Such is the imperative of the heroic woman I imagine my grandmother to have been in that faraway place and time.

She stayed because she had led a purposeful life there, teaching Chinese women to be schoolteachers and educating Chinese children with firmness and affection. She had a reason for being and felt a great sense of belonging. According to her writing, they came to her with every sort of question and problem. She oversaw not just daily lessons, but personal issues of the heart, and often hygiene and medical concerns as well. When she finally returned to America, my grandmother came to live with us, but she always longed to return to China.

I imagine that she longed to go back not just to that fascinating, though difficult, landscape, but also to a version of herself that was powerful and needed by others. Her life in China had meaning and significance, while her years in the U.S. must have seemed dull and inconsequential by comparison.

As history would have it that return was not to be. When China closed its doors to outsiders in 1949, her heart must have seized up with sorrow and frustration. The country she had come to think of as home was forever outside her grasp. My father, meanwhile, went on to become a professor of political science for over 40T years and a renowned Sinologist, writing dozens of books on the subject of Asian politics. And yet, according to him, it was his mother, more than himself, whose “whole life was China.”

My recollections of her, while vague, are uniformly rosy, though my father, mother and older siblings necessarily had more complex feelings about her. By their accounts, Gertrude was domineering and meddled in our family’s business. As she aged, it became more apparent that she belonged to another time. As a former missionary, she remained a teetotaler, putting a damper on my parent’s cocktail hour. She felt they were too lenient with her grandchildren and too materialistic overall. The woman who had once managed by her wits and will power against dangerous odds in a foreign land was now reduced to sniping about the domestic habits of her son and his brood. She and my mother locked horns over the decorating of the house—the placement of the Chinese furniture and objects that had once belonged exclusively to her and now belonged to the family. She had been far too bold a younger woman to be relegated to such a superfluous life. The contrast must have been maddening to her.

When she died in 1966, I was only six years old, but I still have a clear impression of her. Leaning into the embroidered pillows on the antique Chinese sofa, she let her youngest grandchild crawl into her lap. I pulled on her ears and with a child’s innocence asked why they were so long. In an adult voice—for she never took on a babyish tone—she explained that Confucians believe that long earlobes are a sign of wisdom and sagacity. I was instantly awed by the idea and knew with certainty that it must be true, especially about her.

My grandmother had a wry sense of humor, but she was not a light-hearted person. I am told that she favored me and was at her warmest when she brought down her fine Chinese porcelain for us to use in tea parties. I suspect my love of Chinese objects dates back to those special moments when I could sense how precious they were to her. She had left the country behind, but still had these treasures to carry her back in her mind. And she was willing to share them with me. I felt she was offering me an unspoken gift that I have only now repaid with my novel.

Years later, when my father was an old man, he shared another astonishing anecdote of hubris and heroism by my grandmother. Out at the family’s country cottage in the Chinese foothills, bandits had swooped down in the middle of the night. They came to rob the mill nearby and break into the small cluster of missionary homes. My grandmother threw her shawl over her nightgown, stepped out onto the porch in the moonlight, and shouted at the bandits. She told them that their evil intentions were wrong and very bad. The masked men seemed astonished by this white woman who raised her voice and scolded them in their own language. They turned their horses around, shamed and perhaps even a bit frightened.

Like many women during WWII, my grandmother’s full self was only allowed to emerge under dangerous circumstances far from home. Now we take for granted the range allowed in women’s lives, but at that time the choices were stark and limiting. Her narrow, domestic later years took their toll on her, and robbed our family of a role model far more dynamic than others available to us at the time. I wonder what it would have taken for us to realize we had a hero in our midst, and not simply a cranky old woman, forgotten by time.

Virginia Pye is a writer and teacher living in Cambridge, MA. Her second novel, Dreams of the Red Phoenix, is available now from Unbridled Books. 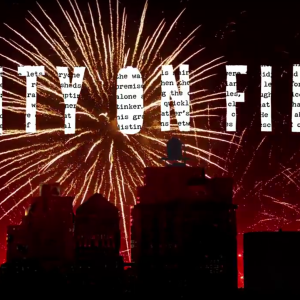 The much ballyhooed “it” book of the fall is here, the Nobel committee honors Belarussian author Svetlana Alexievich...
© LitHub
Back to top