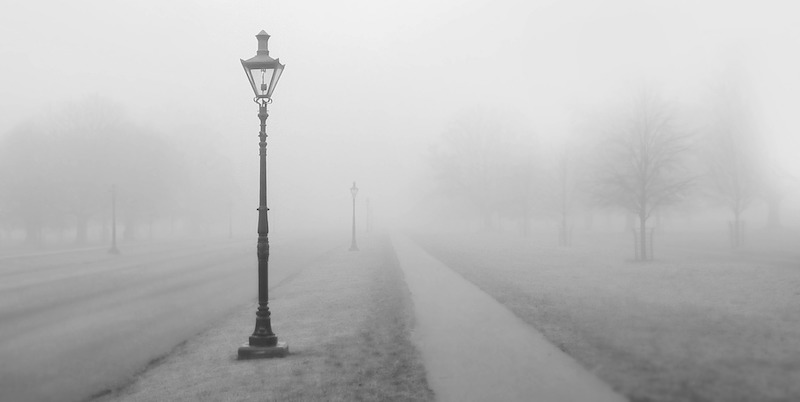 A Survivor’s Guide to the Long, Slow, Infuriating Process of Revision

A version of the following appears in Lit Hub’s Craft of Writing newsletter—sign up here.

Benjamin Percy makes a productive distinction between revision for novice and experienced writers:

When revising, the beginning writer spends hours consulting the thesaurus, replacing a period with a semicolon, cutting adjectives, adding a few descriptive sentences—whereas the professional writer mercilessly lops off limbs, rips out innards like party streamers, drains away gallons of blood, and then calls down the lightning to bring the body back to life.

We might list a catalog of things most of us needed to learn when we were beginners—avoiding the tic-y repetitions of certain words, the reliance on cliché, the overuse of adverbs, etc. Many of these small elements of style have to be learned, which is to say that for most of us they are at some point a feature of revision.

The same is true for aspects of technique. When I was starting out, for instance, I didn’t include much dialogue in my stories (beginning writers have a common tendency to get “stuck” in a mode—telling or showing) and had to remind myself to incorporate scenes during revision. But that hasn’t been true for a long time now; the toggling between modes of scene and narration has become more intuitive, natural even, as I’ve become more practiced. Which is to say that, like Ben Percy, my experience of revision has altered over time, as I’ve revised myself as a writer, so much so that many of those hard-learned skills have become second nature, showing up even in first drafts.

This is good news, of course, but it also suggests that revision is a moving target, hard to pin down and define. Experienced writers still wrestle with revision, but such is the protean nature of the process that it’s not the same revision as earlier in their careers. And what’s fundamental to revision I’d suggest is not what the beginning writer does, but what the experienced writer does. Theoretically, I suppose, there might be an infallible writer, one who—with enough experience—writes perfect first drafts, but I doubt it. Even God needed to start over after the Flood (and apparently still felt the need for a sequel . . .) So, what does it mean when a writer who has mastered all the technical skills still needs to revise? What’s that essential core of revision? What’s left to change?

The lists of writing tips (however useful) that feature in many articles and manuals about revision, then, would seem to not tell the whole story. We begin to intuit that revision isn’t just a catch-all description for various refinements of craft and style, but a skill in itself, a technique of its own, a state of mind even. In which spirit, here’s a (partial) list of ways to re-envision revision and perhaps in the process get a little closer to that revisionary mind-set. What’s left to change, it turns out, may be our own approach to revision.

Don’t assume boredom is the end.

1.
Think of your initial aim or intent for a story as a hypothesis, and a draft as an experiment designed to test that hypothesis. You need a hypothesis to design an experiment, after all, but the experiment doesn’t assume that the hypothesis is correct, a distinction that can free us from a too-rigid or limited early idea of a story. One such hypothesis might be “I think I know the ending,” but in the writing, or via feedback, we might discover that the story ends later than we thought—a pretty common revelation actually since the ends that we have in mind for first drafts are typically climaxes, whereas stories often continue beyond their climaxes, into a denouement, or resolutions phase, the so-called falling action of Freytag’s (in)famous triangle. Other stories, we may discover, end sooner than we thought; still others veer off along the way. Crucially, note, an experiment isn’t a failure if it disproves a hypothesis. For a scientist that’s success, it means they’ve learned something.

2.
Revise your definition of progress. If we think of revision as a process of perfection, and approach the goal of finishing with impatience, we’re apt to greet any failed hypothesis with dismay, and even resistance. I’d suggest measuring our progress less towards perfection, or finishing, but towards greater knowledge of our work. If you’ve learned something new about your character, your story—even/especially if that new knowledge points to the need for further revision—you’ve made progress.

3.
Welcome complication. It’s vital to embrace new knowledge because the tendency is to fear it. New knowledge often brings complication. If I just learned something important, it’s likely to change the whole story, making the end point feel as if its receding. New insight can thus give us the sense of one step forward, two steps back in revision. But with patience those complications can be seen as complexity, and welcomed as adding depth and texture to our work.

4.
Early drafts often need to expand rather than contract. Revision is not (only) editing, in the sense of cutting or contraction. There’s a time for that kind of revisionary work, to be sure, but it’s often later in the process than we imagine, or out of impatience allow for. Early revisions can become messier, but you need to let yourself explore to make discoveries. Hemingway’s line about leaving out, or cutting, what you know, returns here. Most of us know by writing, and if you cut too soon you may not have yet discovered what you need to know.

5.
(Sore) thumbs up! Workshop, especially, is good at identifying problems in a story, and one response to that feedback is to cut the problems, the distracting, or seemingly irrelevant details. We lop off the sore thumbs, hammer flat the proud nails. Yet sometimes it’s exactly these odd details, these untidy anomalies, that are worth expanding upon. The things in a story that seem easiest to cut are often the things of which we say I’m not even sure why that’s there…which is to say they may be the least planned, most alive things, the places where our subconscious is breaking through our conscious intent. Following those leads, rather than erasing them, can be a good way to make revisionary discoveries.

6.
The only “wrong” cboice is no choice. Workshop feedback often presents revisionary choices: call them Door Number 1 and Door Number 2. Some people in class suggest one, some the other. We might ourselves agree with the diagnosis of a problem in a story, but be paralyzed by the choice between revisionary responses—how to choose? Which is right?—and that paralysis tends to result in no choice being made.

But this too is a manifestation of impatience. We fear the wrong choice, because it will waste time, take us further from our finished, perfect story. And out of fear of making the wrong choice, we make no choice. But what’s the worst that can happen? You make the wrong choice, pursue it, discover it was the wrong choice, and…go back to the previous draft. Is this wasted endeavor? Again, I’d rather call it a successful experiment. Door 1 is just another hypothesis to test via experiment. If you learn that Door 1 was a dead end, you may have also learned that Door 2 is the right path.

7.
Go beyond boredom. Sometimes stuckness comes from exhaustion, also known as boredom, and there are writers who will describe this as the end point of revision, by which measure stories are less finished than abandoned. But boredom seems a rather dispiriting end point for a creative process, even if I agree that it comes to us all.

That’s how you know you’re done: when you understand why you told your story in the first place.

By all means, take a break—work on something else—but don’t assume boredom is the end. Boredom, as any child knows, is the soil for daydreaming, for imagination. Every writer is a writer because they were once bored—as kids, in college, in work. Boredom isn’t the end, it’s just a phase of the process—often the one before a break-through if we can only outwait it.

8.
Don’t forget to revise titles. They have a tendency to become set in stone very quickly, and because of their brevity, the quality of either working or not, can seem resistant to revision. And yet even bad ones can be useful. Sometimes we need to move through bad ones to get to good ones, sometimes even the bad ones can be instructive in focusing a draft. If your story is named for a theme, say—chances are that draft will be thematically driven. If named for a place, or an event or a character, again those are likely to be our focus. Shifting the title might thus be a nudge towards a new goal for the next revision.

Gatsby was at one point “Hurrah for the Red, White and Blue”—a truly terrible title, but one within whose crude satirical sarcasm we can read the subtler irony of The Great Gatsby. An early version of Lady Chatterley’s Lover (itself a model title—three words, indicating two main characters and promising tensions of illicit love and class conflict) was entitled “John Thomas and Lady Jane”—old British euphemisms for male and female genitalia!—an unworkable, unpublishable title, but one I suspect that emboldened Lawrence, reminded him daily, of his avowed intent to speak forthrightly and frankly about sex.

9.
Doneness. A common tenet of the writing workshop is that we try to judge a story with respect to its author’s intent. That’s a respectful and pragmatic strategy—if a writer’s goal is tragedy, then asking at the start of any discussion for more jokes seems to miss the point, not to mention dismiss the author—but one that none the less bears examination. As I point out to my own classes, it rests on an assertion that we writers know our own intent in an early or first draft when I’d argue on the contrary that we rarely know ourselves or our work (which may amount to the same thing) so well at the outset. I should stress this isn’t some spurious binary between having an intention and not having one. Not knowing what we intend isn’t the same as having no intention. We do often have some idea, some sense—call it a hypothesis, as I do above, call it a hunch, an inkling, what you will—but our writing often reveals to us the limits of that idea, the fuzziness of it.

At which point, of course, we’re often tempted to give up. We lose faith in the shining idea that got us started when we discover its flaws. I’d argue on the contrary that we need to persevere, that the discovery we’ve made—that our idea isn’t as sharp as we hoped—doesn’t mean the idea is no good; rather it suggests it’s more complex, more not less worthy of further exploration. And that seems to me to be exactly the purpose of revision—not the perfection of the expression of some already known subject or idea, but the investigation of it, towards a deeper understanding.

We revise—which is to say we write—to understand our intent, to understand our own stories, to understand ourselves. And the reason we, like Dorothy Parker, love having written—truly written, including revision—is because it means finally understanding what we’ve been doing. And that’s how you know you’re done: when you understand why you told your story in the first place. 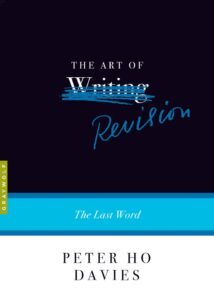 The Art of Revision: The Last Word by Peter Ho Davies is available via Graywolf Press.

Peter Ho Davies' most recent works are the novel A Lie Someone Told You About Yourself and the craft book The Art of Revision: The Last Word. A winner of the Anisfield-Wolf Award and the PEN/Malamud Prize he teaches at the University of Michigan in Ann Arbor. 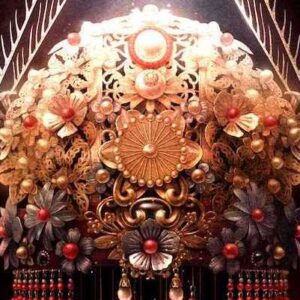