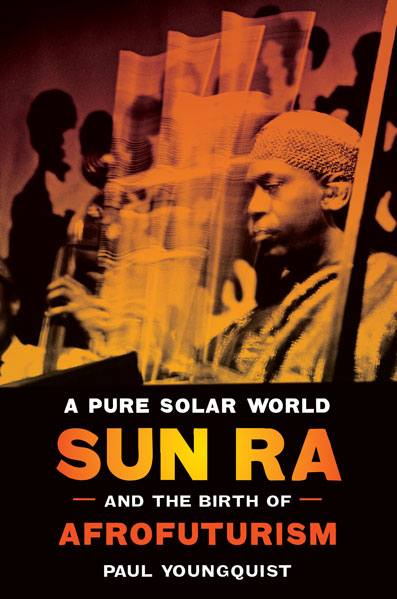 The following is from Paul Youngquist’s book, A Pure Solar World: Sun Ra and the Birth of Afrofuturism. Youngquist teaches English at the University of Colorado Boulder. He is the author or editor of six books, including Cyberfiction: After the Future, Monstrosities: Bodies and British Romanticism, and Race, Romanticism, and the Atlantic. He now devotes much of his energy to studying the histories, written and oral, of resistance and creativity in the Caribbean.

New sounds blew through Sun Ra’s head, sounds that exceeded the size and shape of more conventional jazz forms: swing, with its ensemble harmonies; bebop, with its jagged melodies and rhythmic tricks. It would take a lifetime to turn them all into compositions. Sun Ra now had a band of his own to express them freely and to share them with the world. But the sounds were not the whole of it. They chimed with ideas, longings, and visions that had visited him for years. Music was more than music. It stirred a philosophy in his bones, a deep wisdom he would orchestrate–eventually.

Sun Ra had been writing text, too, for quite some time. Words provided another way of expressing his beliefs and visions. While enrolled in teacher’s training at Alabama A&M, in Huntsville, he had kept a journal in which he recorded his private thoughts and experiences, including the details of his alien abduction. One afternoon his roommates found it and read it to one another aloud, laughing and jeering mercilessly. He threw his journal into a smoldering ashcan. He would never again be played for a fool. But he continued to write when the mood descended, mostly poetry, sometimes vatic prose. He considered himself enough of a writer to list poetry among his serviceable skills as a conscientious objector. Although music alone made life livable, his poems helped him survive. They opened a space for spiritual reflection. Over the years, they would pile up to become a kind of user’s manual for his compositions, instructions for better listening–and living–in a spiritual key.

It makes sense, then, to approach Sun Ra’s poetry as a prelude to his music. The relation between the two bodies of work is as intimate as that between two common registers of the word “composition”: a work of words or of sounds. Sun Ra worked in both. His lifelong activity as a writer provides a verbal commentary on a corpus of musical creation that remains utterly unique in jazz history, which typically relies on a tissue of reminiscence, research, and invention to convey a sense of the music’s significance. While it would be naïve to read his poems as straightforward explanations of his music, they nevertheless offer slanted insight into its urgent, often strange sounds. His poetry crosses the music at oblique angles, or better, inflects it from within. “My music is words,” he writes, “and my words are music.”

Sun Ra’s words do not script his music. Rather, they recapitulate it in another idiom. Words equate with music, and vice versa, in a manner that communicates an abstract, ultimately spiritual wisdom: “My words are the music and my music are the words because it/is of equation is synonym of the Living Being.” The reversible phrase “my words are the music” provides an instance of the equation “it/is,” which resolves distinctions into identity, a point Sun Ra makes semantically by equating the plural and singular form of the verb “to be.” For him such an equation becomes possible only because Living Being underwrites it. Words = music = Being. To examine Sun Ra’s poetry, then, is simultaneously to explore music and Being as well: words equating to music equating to spirit. A logic of equation guides the movement of Sun Ra’s whole creative corpus. Poems accumulate in a verbal space (also a musical space) that expands to receive them. Over the course of a long career, with the exception of a few early experiments in a confessional mode, Sun Ra displays almost no development as a poet. His poems appear as if written in some deep past or distant future, on stone tablets, perhaps, or a Plutonian polymer. They arrive as if perpetually complete, and even when revised, they read like holograms of a higher world glimpsed completely in its scattered shards.

And they are scattered, those poems. Sun Ra’s poetry has yet to receive treatment equal to the seriousness with which he wrote it. That seriousness was not lost on its few early proponents. The great progenitor of the Black Arts movement and theorist of black music Amiri Baraka (earlier known as LeRoi Jones) included several examples in the incendiary anthology he edited with Larry Neal, Black Fire (1968), and also printed an instance of Sun Ra’s prose in his underground newsletter The Cricket (1968). A few poems also appeared in the important Black Umbra anthology (1967–1968) and even in a commercial collection of black verse entitled The Poetry of Black America: Anthology of the 20th Century (1973). Sun Ra’s reputation as a poet seems since to have sunk in proportion to his recognition as a musician. Its haphazard “publication” scattered the poetry across a hodge-podge of different media: record jackets, concert brochures, promotional flyers, business cards, and a variety of self-published booklets. Several recent collections from small presses offer gatherings of a corpus that can probably never be completely determined, so cavalier was Sun Ra’s approach to publication. Editorially improvisational, these volumes nevertheless make a selection of the poems available to intrepid readers.

The lack of a scholarly alternative leaves a collection whose subtitle gestures toward totality–The Collected Poetry and Prose–to serve as the standard edition of Sun Ra’s written work. Compiled and edited by James L. Wolf and Hartmut Geerken, The Immeasurable Equation includes several essays, some by prominent scholars, that help dispel the confusion this poetry can arouse. But even this edition amounts to little more than the work of earnest amateurs, the bibliographic equivalent of a fan-boy record collection. Sun Ra’s poetry awaits serious editing. The near-universal neglect plaguing this singular musician and visionary’s writings, which languish in slap-dash editions, attests to the skewed priorities of commercial and academic publishing alike. Although Sun Ra sought to place his work with mainstream publishers, none would hazard such strange material. Undeterred, Sun Ra self-published his poetry in multiple editions of booklets bearing the cryptic titles The Immeasurable Equation and Extensions Out: The Immeasurable Equation, Vol. II. A title he used for a related, never-published volume from 1966, “The Magic Lie: Outer Universe Equations,” shows how consistently he applied the term “equation” to his poems. He printed the booklets privately and sold them at performances or through the mail.

Sun Ra later defended his decision to publish his poetry himself:

I had to pay for it myself, ’cause in America, the main publishers said it might as well be written in a foreign language as far as they were concerned. It seemed to be poetry, in a sense. But it’s not, it’s equations, put in nice forms, just like putting some chocolate on top of it. It was just so strange to them, because of their fixed opinions.

Sun Ra’s disdain for a commercial idiom becomes clear to anyone who reads his poems. But note his unexpected assent to the opinion of America’s “main publishers.” They reject it for sounding as if written in a foreign language.

Rather than contest that opinion, Sun Ra corrects it. What those publishers took to be poetry is actually something else: “equations.” The result is not poetry written in a foreign language but language written in a foreign idiom. “Equations put in nice forms”–in this disarmingly simple phrase Sun Ra announces a theory for composing poetry like little else in English, and maybe any other living language, too. The “fixed opinions” of commercial publishers blocked their capacity to perceive or value his poetry in its own terms. In a move deeply characteristic of much that he would create, Sun Ra decided to produce his poems himself, beyond the control of a culture industry blinkered by narrow opinion and guided by invoices. This is DIY meets avant-garde in a poetics of transposition that turns poetry away from traditional forms and toward new ones, “nice ones,” forms for transporting people elsewhere.

From A PURE SOLAR WORLD: SUN RA AND THE BIRTH OF AFROFUTURISM. Used with permission of University of Texas Press. Copyright © 2016 by Paul Youngquist.


A Pure Solar World: Sun Ra and the Birth of AfrofuturismExcerptmusicnonfictionPaul Youngquistpoetry
Share: 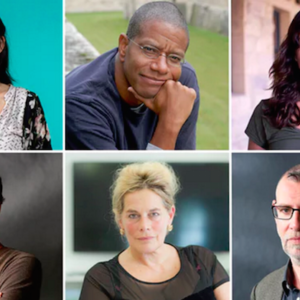 Inside the World of Judging the Man Booker Prize London feels properly autumnal, it’s cold outside and daylight is rapidly dwindling, which can only mean one thing: the Man Booker...
© LitHub
Back to top