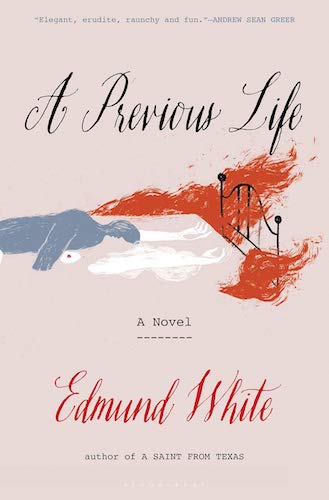 The following is excerpted from Edmund White's new novel, A Previous Life. White is the author of many novels, including A Boy's Own Story, The Beautiful Room Is Empty, and The Farewell Symphony. His nonfiction includes memoirs, literary biographies, and essays. He was named the 2018 winner of the PEN/Saul Bellow Award for Achievement in American Fiction and received the 2019 Medal for Distinguished Contribution to American Letters from the National Book Foundation.

Six months had gone by and the day was fast approaching when they’d agreed to read their memoirs in alternating chapters out loud to each other. They were in the Engadin, in the little town of Sils Maria. Around the corner, in a two-story house painted white with green trim, Nietzsche had lived briefly in the upstairs room. Now the Engadin was a costly ski resort, twice the site of the Winter Olympics, but in Nietzsche’s time, it must have been one of the most remote places on earth, reachable from Italy only by a steep, perilous road through the Maloja Pass in a carriage, then a sleigh pulled by six lathered-up horses baring their big yellow teeth around the bits, their breath visible in the cold mountain air (a sleigh ride was disagreeably called a Schlittenfahrt in German). The most famous village in the area was St. Moritz.

They had no visible servants there, though an expensive service washed the sheets, shoveled the roof and walkway, watered the plants, ran the sweeper, aired the rooms (throwing back the heavy duvet), turned up the heat a day in advance of their return, dusted everything (though there was no dust so high up in the mountains). The simple priceless side tables inlaid with split reeds and designed in the 1920s, the overhead lamp from the 1950s made in Milan, sprouting multicolored metal cups of light, the matronly restuffed 1950s couch from Paris in green velvet, the polished wood zigzag chairs, the huge painting of the naked, dagger-wielding artist himself with Italian words spilling out of his mouth— all of it materialized before their eyes as Ruggero turned on the track lighting and disarmed the security system. The room looked glaring and guilty as a police photo of a murder scene. Not one thing in it had Constance chosen. She had put up a favorite Chagall poster of a red rooster, but it had mysteriously disappeared and found its way into the unused maid’s room. She knew the house represented the high point of taste (she knew it because connoisseurs exclaimed over it and shelter magazines often asked to photograph it but were always turned down. Ruggero was worried about thieves and tax collectors).

This afternoon they’d arrived in their four-wheel drive, so suited for navigating through the snow. Ruggero had insisted on skiing right away. Constance didn’t really ski. She’d taken lessons but was afraid of heights, and even the mountain lifts made her sick. The only reason to ski was to keep Ruggero company, and after she discovered he found her ineptness annoying she abandoned the unpleasant effort. Whereas he had gone on ski holidays with his distant cousins every January since he was six, she had never even put on a ski boot until she was twenty-eight— and had promptly broken her toe and had to sit slightly drunk by the fire with a lap robe and a brandy snifter (how delightful!), watching through the windows the dying light illuminate the downhill racers.

Ruggero liked to be in control and reveled in his superiority— athletic or intellectual or social. As long as his partner wasn’t embarrassingly crude or dense, he seemed to think it normal that he’d outshine everyone around him. Of course he liked that his wife was beautiful and young enough to be his daughter, though he didn’t like it when people thought she really was his daughter; it didn’t matter she didn’t speak proper French or Italian or Spanish (no one spoke Sicilian and almost everyone spoke English). She wore clothes well, never put on too much jewelry or weight or makeup or perfume, had the perfect laugh and an unaffected, unobtrusive American accent. She’d learned about entertaining from him but never tried to exaggerate her origins and was quick to acknowledge how humble they were. She knew that the only acceptable thing to give a host at a dinner party was a small box of chocolates, that after-dinner drinks were vulgar, and that a thermos of hot herbal tea should be prepared in advance and left in the study. She knew not to serve raw oysters to Midwesterners and to avoid red meat with guests from the coasts.

That there should be no music over drinks, that candlelight gave people headaches, that too many forks or glasses looked forbidding.

She took a nap. In her dreams she was walking through a mysterious foreign city under windowed closed-in wooden balconies that protruded out over the sidewalks on either side (could it be a Turkish city?) when suddenly the telephone was ringing. It was like a huge black insect crouching beside the bed. She reached for the heavy Bakelite receiver and said hello, though she couldn’t remember for a second which language was appropriate (Pronto or J’écoute or Guten Tag) but then to her relief it was Ruggero, speaking in English: “Don’t panic, darling, but I’m in hospital. I broke my leg skiing. I’m a hundred percent okay.” She was suddenly wide-awake and wished she had a cigarette, though she’d given them up ten years previously.

He explained that he’d broken his promise to her and hired a helicopter to fly to the very top of the mountain, where there were no pistes, in fact nothing he could see but a line of wolf tracks. Once he’d moved from the flurry and commotion of the helicopter and it had glided away, he was all alone with the purity of the mountaintop, this pristine unmarked snow, no other skier in sight, the only other living creature a huge eagle floating by on motionless, extended wings. He found the solitude and the windless cold exhilarating as he slalomed down across the treeless heights. The snow was firm and trackless and his feeling of entitlement— of his sole possession of these unblemished slopes, entirely imperial, his lungs burning with the thin, chilled air— provided him with the acme of excitement.

Now, after ten or twelve minutes of the unsullied pleasure of heli-skiing he could spot the first other skiers getting off the lift— and suddenly his right ski struck something and he was flying through the air and he landed on his back and felt a terrible shooting pain scorching his spine as if it were no longer fretted bone but a single bolt of lightning. He thought, Will I be paralyzed for life? Better to be dead, he told himself, he who’d always been the fittest, most attractive example of whatever age he was passing through. But he banished that thought. Now he looked down on his splayed body as an angel might loom above a recently abandoned corpse. Was his leg broken? Back? Was he bleeding?

Fortunately he’d fallen within sight of the other skiers, one of whom was already most likely phoning for help. The helicopter was back, whipping up clouds of snow and deafening the silent slopes as it lowered itself like a fat woman on a skinny man, except here the skinny man was him . . .  Ruggero was floating into and out of consciousness, but amidst the falling, thickening veils he thought he could see someone picking his way carefully down through the air on a floating ladder, like an angel on the scala paradisi. Ruggero had a brief lapse of consciousness, as if several feet of celluloid were missing from a restored film— and suddenly the sepia register had abruptly switched to blue. Here was a bearded medical assistant with a young, handsome face bending over him and speaking Swiss German, which Ruggero could understand but didn’t like to encourage. The medical assistant was listening to Ruggero’s faint voice; he spoke in real German if with his Italian accent, not so unusual in the Ticino or among Italian-speaking executives working near here in Zurich.

The man said in English, “Don’t worry. You’ve broken your leg, that’s all. We can lower a stretcher from the helicopter and have you in a good Swiss hospital in minutes.”

Ruggero whispered, “At the mere cost of twenty thousand dollars, I suppose. Pity it didn’t happen on the Italian or German or French side of the country, where I would have been fully covered.” He felt vexed again that Switzerland remained outside the European Union. Of course, he could afford it whatever it was, but the Swiss were so stubborn. And greedy (everything they did was primarily done to protect the independence of their banks). He’d rather buy a new Landrover with the money—but at least he was alive and wouldn’t be receiving medical treatment in Zimbabwe, say, and with any luck his leg would heal properly and Constance could make him petits repas and they’d be cozy in their chalet, though in reality he despised coziness and preferred magnificence. Comfort was for cowards. The way Americans sought out their comforts so zealously struck him as obese and sexless. He hated the Swiss and the Americans, besides Constance, of course—and suddenly he realized he was in a disastrously foul mood.

“I’m going to give you a pill so you’ll feel less pain during the transfer.”

“And be fooled into signing any document the hospital needs to bleed me dry.”

“You’re certainly being unpleasant and paranoid.”

“This isn’t the first time that the Swiss have drugged me and then asked me to sign documents to their advantage.”

The medical assistant sat back on his haunches. “Do you prefer we leave you here in the snow?”

The young man gave him fentanyl sublingual, which made him instantly confused. Within seconds Ruggero, smiling and stoned, was tilting and teetering through the air on an airlifted stretcher toward the racket of the helicopter and its maw.

Patricia A. Jackson on Reworking Biblical Lore and Mythology 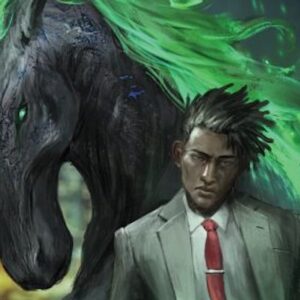