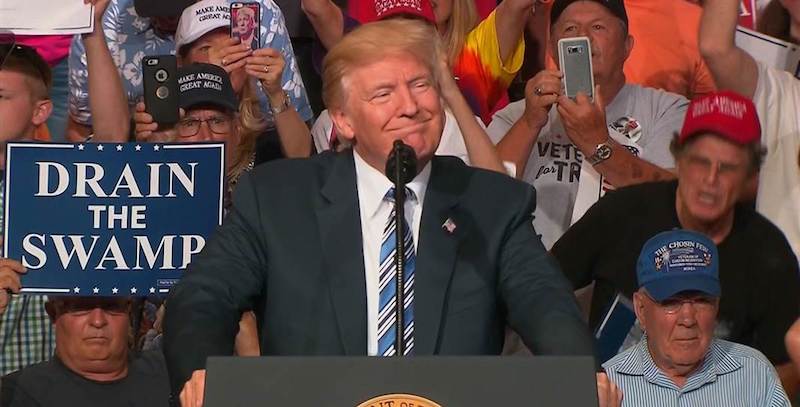 In early 2015 I was writing a novel I was calling We Make the Future about a producer for an Alex Jones-like conspiracy mogul who gets drawn into an actual conspiracy. The plot was a bit convoluted—supporting characters included the starting quarterback for the Houston Texans who loses his mind and begins to think he might be God—and the day-to-day stress of piloting the manuscript further into obscurity was taking a toll.

Looking back from 2017, where every single second of every single day is soaked with political anxiety and dread, it’s hard to remember why I thought diving into the 2016 Presidential Election would provide a respite, but, regardless, it was after I’d just finished a section where the quarterback discovered the concept of solipsism that I decided to throw myself into the upcoming election and possibly write a book of analysis.

I wasn’t planning on driving around the country to report from rallies and events of national import, like the night Donald Trump announced his intent to ban Muslim immigration or the tragic Mother Emanuel shooting in Charleston, or that I’d get dragged into the story after my reporting from Trump’s events went viral. Even now, as I continue to report from this waking nightmare and get embroiled in one thing after another, I feel miles and miles away from the person who was looking for a brief break from a novel that was giving him fits.

At heart though, I’m still a fiction writer. Which is what I say whenever interviewers ask whether reporting and writing about politics means I’m going to step away from stories. I’ve got a manuscript ready to publish. And, after I’m done writing a book about toxic masculinity, I’ve got another novel outlined. When I answer those questions though, I maintain that not only can a person write both nonfiction and fiction, but that the latter helps immeasurably when working on the former.

This is especially true in our times, where countless outlets and mediums are competing to define just exactly what the hell is going on in a country where nearly everyone has their own explanation. These competing narratives are oftentimes simplified to the point of absurdity and, if we’re being honest, have played a role in priming our electorate to choose someone like Donald Trump, a man who is especially adept at countering unwieldy and nuanced explanations with overly abridged ones that are easily consumed by his supporters.

Writing fiction, as I tell my students, is an exercise in extended empathy. Characters should be complex, multifaceted, and their wants and needs ultimately determine their flaws and character arcs. Politics, for so long, has depended on the same concept, particularly in the cable news era where politicians are characters on the world’s most important television show. The news, however, presents these characters as two-dimensional whereas, in order to understand Trump and his supporters, analysis demands further examination.

For instance, if Donald Trump were to be a character in a novel, an astute reader would pick up immediately on the fact that he was fatally insecure. We’d see his past relationship with his father, his sensitivity toward New York high society and his perceived status as an outsider, as well as his incessant timidities when it comes to matters of his success and his looks and realize what factors motivated him. Because he’s now the most unpopular president in modern history, we might overlook those things and assume, because of our own biases, that he behaves the way he does because of some evil purpose as opposed to deep-seeded anxieties. This misunderstanding is part of the reason why so many pundits and experts get Trump wrong: they think he’s unpredictable and inexplicable when he is anything but.

As for his supporters, it’s much easier to lump them into one homogenous group with simplistic motivations, but if the principles of narrative fiction are followed, and they most certainly are in the real world, we know the past plays an inexorable role in determining the present. While pundits ask how they could be be fooled into voting against their own interests and electing the type of man they should, by all accounts, dislike and distrust immensely, the answer lies in decades of propaganda, the fiction that had been fed to them by the right and has done its job in convincing them of an alternate reality. This, in a novel, is the exposition of the matter, and one of the reasons we love reading so much: the discovery that the past, present, and future are inescapably linked.

These are but two of the many principle characters in this soap opera, but they give some understanding of how the Election of 2016, and, to a much larger degree, the World As We Know It, is often misunderstood as “chaotic” and “unpredictable.” In the conversations I’ve had, so many times people have said “this is stranger than fiction” or “you couldn’t write something more bizarre,” but honestly, what we’ve seen happen in the past two years is nothing if not predictable. With exposition, and an understanding of character, you can see not only how this has happened, but also where it’s leading. Narrative fundamentals that govern the writing of novels are a reflection of those that direct real-world happenings, and no matter how bizarre and strange the development, you can trace the history and root of the matter and, eventually, its future.

Jared Yates Sexton’s The People Are Going to Rise Like the Waters Upon Your Shore is available now from Counterpoint Press.

Jared Yates Sexton is a writer and political correspondent whose work has appeared in The New York Times, The New Republic, Politico, and elsewhere. Currently he serves as an Associate Professor of Creative Writing at Georgia Southern University. His book The People Are Going To Rise Like The Waters Upon Your Shore: A Story of American Rage is available from Counterpoint Press. 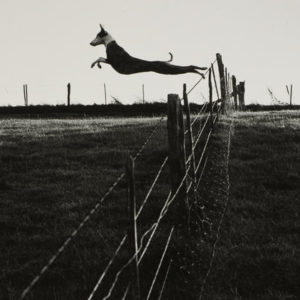 A daily reporter once told me her trick for writing under intense deadline pressure was to imagine herself on a train. Each...
© LitHub
Back to top