During shelter-in-place I’ve been reading Italian writer Elsa Morante’s supremely adroit and quietly enthralling World War II novel History, that turning point in human civilization experienced on the subdued wartime streets of Rome. Morante writes with studied precision about the two men dominating the lives of her characters, Adolf Hitler and Benito Mussolini. Both, she wrote (in the English translation by William Weaver), were “sick with a vindictive sense of inferiority” that warps and distorts their unfulfilled dreams.

It’s hard not to think these days, in the grist of the coronavirus pandemic, about the human cost of the vindictive sense of male inferiority. It’s playing out nearly everywhere, from Australia to Brazil to Chile, to England, Mexico, and certainly the United States, where small, frightened men seemingly incapable of preparation, careful study, or collaboration have turned a significant public health challenge into an unnecessary global crisis of mass suffering. Notably, given the domination of men shaping the response, Covid-19 is far more deadly to men; the Washington Post estimates that males account for 60 percent of fatalities worldwide.

On both accounts the pandemic is made to feel a lot like war instead of the humanitarian crisis it is. And war, decidedly that male creation, perpetrates its own fog of posturing, misinformation, accusation, and exploitation; ultimately, as we may unfortunately see, war creates war. A humanitarian crisis, in contrast, precipitates cooperation, sharing of resources, and an abeyance to facts, which cannot be manipulated away. My shame as a man and my terror as a human is that exactly the wrong people are in charge.

From Putin to Trump to Morrison of Australia, impudent, fact-denying men have been inoculating each other against the truth of the global climate crisis.

Foolishly, I play Hillary Clinton at the second 2016 presidential debate over and over in my head, “I also prepared to be President.” When Clinton uttered that practiced six-word sentence she spoke for my 20-year-old daughter, who has always understood implicitly that she has to study harder than her male peers, and her 23-year-old cousin, a paramedic, who like so many medical professionals on the front lines, is in danger because a cavalier and sloppy man failed to do his most basic job. (The record of Donald J. Trump’s profound delinquency, mendacity, and perversity in regard to every aspect of the United States government’s response to the novel coronavirus outbreak has been delineated by reporters, even as more revelations still emerge; they don’t need to be rehashed here.)

Clinton is just one of millions of brilliant women held back perpetually by a system that privileges male insecurity above all. Covid-19 puts in stark relief not only the fragility of society but also the consequences of systemic gender bias and outright misogyny. In the responses to the novel coronavirus in Germany and New Zealand, where the leadership of Angela Merkel and Jacinda Ardern has emerged from thorough and rational planning, clear communication, and swift and unifying action, we can glimpse what ought to be.

Of course, some male elected heads of state are knowledgeable and diligent leaders who have accepted responsibility and inspire trust (we are thankful for the various governors of US states who are in this category). But my concern is with the wanton men who dominate our consciousness and whose actions will determine how many people across the globe become sick and die. Reading History, I wonder if we will remember them as we do Mussolini and Hitler. Mussolini, Morante perceived, sought fanfare and obedience, where he “would play the part of certain beatified ancient vassals (Caesars, Augustuses, and so on…) before a living crowd humbled to the rank of puppets.” Quite a bit more dangerously, Hitler, who was “tainted by a monotonous, vicious necrophilia and horrid terrors,” could only believe that “every living creature (including himself) was the object of torment, to be degraded even to putrefaction.”

But the menace of these men multiplied exponentially when they joined together. To the disgrace of Italians who could withstand Il Duce’s fascist picadillos, Hitler required of them putrefaction: to spoil their brains, their own personal experiences, and their humanity. I’m afraid that in 2020 as in 1939, male imprudence, violence, caprice, and brutal incompetence spreads like a contagion. And we saw it coming.

From Putin to Trump to Morrison of Australia, impudent, fact-denying men have been inoculating each other against the truth of the global climate crisis. The novel coronavirus, in fact like war, magnifies the range and intensity of the menace. There is Brazil’s Bolsonaro, who has responded to the “weak flu” with deadly bravado. And shameless Boris Johnson, now sick with Covid-19, who couldn’t be bothered to take China or Italy’s experience seriously. And López Obrador in Mexico, playing strongman, while leaving his profoundly vulnerable nation a sitting duck. All of these men are trapped by self-mythologizing they cannot escape, and, as prisoners of each other’s contempt for truth, the rest of us are mercilessly trapped with them.

Morante’s History invites the reader to see in specific and haunting detail how ordinary people bear the burden of male vindictive inferiority. When the novel opens it is August 1941, Mussolini is just beginning to enforce Hitler’s racial laws. The novel’s unassuming protagonist, Ida Mancuso, a school teacher whose mother was Jewish, is raped by a sad and stupid Nazi soldier occupying Rome and she becomes pregnant with a boy. How will either of them survive?

Reading, as I’ve been doing at night, with the strange rumble of March thunder out the window, as if some terrible demon has been awakened, I’m struck by a frightening vision. This is when I worry most for my thoughtful daughter, whose academic work focuses on the empowerment of girls and women, forced again to accommodate male privilege, and her cousin, who is supposed to start medical school in August. Despite serious asthma that makes her vulnerable to the novel coronavirus, my niece is working the ambulance during the pandemic because she can’t bear to let her coworkers, her patients, or her community down. History, I’m brutally reminded, is a ledger of costs paid on account of the failures of sad and stupid men.

Nathaniel Popkin is author of six books, essayist and critic, and co-editor of the anthology Who Will Speak for America? 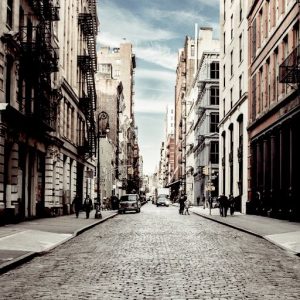 We don’t know who we’ll be by this time next year. We don’t even know how many may no longer be around when this is over....
© LitHub
Back to top