Pandemic in Brazil: Every Night We Take to Our Balconies in Protest

Francesca Angiolillo on Life with the Coronavirus Under Jair Bolsonaro

While an invisible enemy ravaged Italy, and as people remained in their homes waiting for it to pass, they began to realize they were not alone. United by boredom and loneliness, by fear of the coronavirus, Italians went out to their balconies and started to sing to one another, playing drums and tambourines.

Here in Brazil, people are approaching the windows and balconies of their apartments too. But instead of cheering each other up, they are banging pans.

Most of Brazil’s major cities are quarantined because of the coronavirus pandemic. As I write, 5,717 people have reportedly tested positive for Covid-19—the number is likely much higher, as only symptomatic patients are being tested—and 201 have died from the virus. Every night, for the last two weeks, a metallic concert has manifested citizen’s rage against Jair Bolsonaro, breaking the massive silence that envelops a confined nation.

Jair Bolsonaro, the president of Brazil, is isolated in Brasilia. Not in the magnificent Alvorada, the presidential residence designed by Oscar Niemeyer, where mirrors and glass let the outside in, and from which he speaks daily to the press (or more accurately, speaks out against them), cheered on by his supporters. He is isolated in the sense that, as governors across the country adopt restrictive measures in an attempt to curb the coronavirus expansion, Bolsonaro insists on still calling Covid-19 “a little flu.”

The Brazilian economy, which has been sinking for the last six years, is already being affected by the pandemic and of course will not get better any soon. “We have been hit by a meteor,” says the minister in charge of the finances, Paulo Guedes, Bolsonaro’s best bet to try to make the country great again.

So people demonstrate how they can.

It is not the first time people have banged pans against a president in Brazil.

They did so during Dilma Rousseff’s impeachment process, in 2016. Bolsonaro, then a congressman in the House of Representatives, dedicated his vote for her removal to the memory of Brilhante Ustra, a colonel who, during the military dictatorship (1964-85), participated in the torture of Rousseff, who fought against the regime.

In 2016, pans were banged in the wealthy neighborhoods where people wanted the Partido dos Trabalhadores (PT) out of Brazil’s political system. Corruption accusations against members of the party eventually lead to the imprisonment of PT’s founder and leader, Luis Inacio Lula da Silva—and to Bolsonaro’s election, who not only received votes from the far-right but also from those who just wanted a change from the status quo.

At the time, Brazilians gathered at their windows to either jeer and bang pots at each of Dilma Rousseff’s announcements on the television, or to look on in stupefied silence.

Protected by night and distance we scrutinized our neighbors. The woman on the fifth floor of the facing building would never fail to come to her window with a frying pan, knowing she was anonymous in darkness, knowing she would never be treated with hostility in the streets by any of the silent people on the other side; she knew she could avoid recognition in daylight while walking her dog.

From the very beginning of the virus, Bolsonaro has diminished its threat.

Organized via social media, the current panelaço* season was set to start on March 15th, at 8 pm—the so called noble hour, when the evening news begin on TV, and also usually the time picked for official pronouncements to the nation. (*panela being a pan, and the suffix “aço,” an augmentative, serving also to indicate collective action. In English, one could call the phenomenon a “bangathon”).

But it actually had an avant-premiere the night before; people could not wait. From that Saturday on, we haven’t needed watches. The other day, for instance, I was playing Just Dance in the living room with my son, in one clumsy attempt to get him out of the adolescent cave once known as his bedroom—his sole habitat for the last two weeks—and, right on time, over the Lady Gaga playing in the videogame, we could hear the scream: “Fora!”

“Fora,” “out,” “Fora, Bolsonaro.” The usual evening set starts with that cry, accompanied by a distant chiming, then increasing humming sounds, to which horns are sometimes added. They have been stronger before, these bangathons; but the important thing is that they are now constant. Even if some days they sound a little feeble, they stubbornly remind us, night after night, that the country was and still is divided.

For the people who belonged to the silent crowd four years ago it feels a bit like revenge. That does not make them happy though. It is not only rage one catches in their voices. “Assassin! Genocide,” they utter in the night, in a desperate search for catharsis.

Occasionally someone will respond with “Viva Bolsonaro!,” a shameless hurrah, which never remains unanswered. After all, this is a president refusing to act on all the news from other countries deeper in the pandemic.

Last night’s panelaço was particularly strong. March 31st is the anniversary of the coup d’etat that instated the military dictatorship, the very same praised by Bolsonaro.

For the first time, the banging started at 8:30pm, as Bolsonaro went live on TV to distort what the WHO president, Tedros Adhanom Ghebreyesus, had said about the side effects of the pandemic. “We have to avoid any loss of human lives,” said Bolsonaro, “but we have to avoid destroying jobs too.”

From the very beginning of the virus, Bolsonaro has diminished its threat. When he returned to Brazil from the United States—where he’d dined at Mar-a-Lago with Donald Trump—Bolsonaro went out to join a public demonstration against the Congress and the Supreme Court. Later, more than a dozen people in his delegation would test positive for the virus.

To the people who support the president, the democratic system of checks and balances is slowing their captain’s work. Some 30 percent of the population still back him and some of them would be willing to have him as an autocratic leader.

That day, March 15th, freshly arrived from Mar-a-Lago, Bolsonaro met face to face with the crowd outside of the palace, hugging people and taking pictures with their cell phones. Afterwards, he would say that it was his problem if he had exposed himself to the virus—he said not a word about any risk to his supporters.

Every day, with the consistency of the bangathons that take place throughout the major cities of Brazil, Bolsonaro proudly ignores the hygienic recommendations for stopping the spread of the coronavirus.

Last Sunday, March 29th, he said he might issue a decree allowing everyone who depends on an “informal” job—37 percent of Brazil’s population—to return to work. Just another daily dose of the president’s insanity.

But tomorrow will come, as says a song which has been also played from behind windows, as a protest.

The song, “Apesar de Você”—which means “in spite of you”—was first released by Chico Buarque in 1970. Chico, a musician and a writer—and the most recent winner of the Camoes, the most important Portuguese-language literary prizes—is also a declared leftist, with long ties to the PT.

Fifty years ago, when Brazil was facing its darkest period under the military dictatorship, Buarque was in exile. The lyrics he wrote were addressed to the regime’s leaders: “today is your day, what you say you say, there is no debate. In spite of you, tomorrow will come.”

People now play those verses with the hope that the day will come when they don’t have to hear what Bolsonaro has to say.

Meanwhile, they try to drown out his voice with the sound of their pans.

Francesca Angiolillo is a Brazilian writer, based in São Paulo. She is the author of Etiópia (7Letras, 2018), recipient of the Alphonsus de Guimaraens Prize, awarded by the Brazilian National Library to the best poetry book of the year. She works as a journalist at Folha de São Paulo. 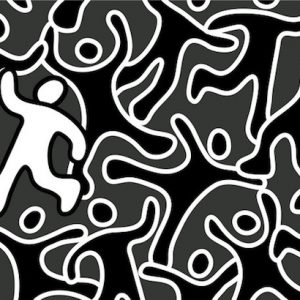 I've been thinking recently about how we are suddenly so wary of contact and contagion, and wondering if perhaps the COVID-19...
© LitHub
Back to top