A Tale of Three Diaries: On Destroyed Landscapes and Lost Narratives

It all began on a bus on the way back to Krakow from Auschwitz. I was 31 and carried with me The Diary of Anne Frank—I was tracing Anne’s life in reverse, starting with her death and moving toward her birth.

I’d read The Diary of Anne Frank as a child and been deeply moved by it. I’d dreamt ever since of becoming a writer like her.

Hers was not the only diary I carried with me. I also had that of my father, who’d been born the same year as Anne, 1929. This diary covered the span between his 16th and 17th years, which also straddled the end of World War II.

My life has lasted one more day.

That was the diary’s first entry, inscribed the first page in strokes of black ink.

My father, born the same year as Anne.

He, a son of the Japanese Empire; she, a daughter of the Jewish people.

The same Jewish people put into concentration camps by Nazi Germany, the ally of the Japanese Empire.

Anne died, and my father’s life lasted one more day, then another.

I’d discovered this diary when I’d returned to my family home on the occasion of my father’s 80th birthday. Finding it, I realized I couldn’t really imagine my now 80-year-old father as a teenager, but even more, I couldn’t imagine the teenage Anne I knew from her diary as the woman she might have become at 80.

And so that’s how I ended up carrying two diaries with me on this trip, tracing Anne’s footsteps but also newly embarking on keeping a journal myself during my travels.

Midway through the trip, a man happened to sit next to me on the bus. He said his name was “Bateau”—maybe a nickname; he said he was a mountain climber from France. Now divorced, he was visiting Auschwitz as part of a trip to see his two children, who lived in the Czech Republic and Norway.

A little over a thousand years after Izumi Shikibu wrote these opening lines, I found myself standing before the spring where, legend had it, she had first been washed after being born.

As soon as I told him I was visiting from Japan, he got excited, telling me in broken English and Japanese about a trip he’d taken to Japan. Loved Nikko, loved onsen, loved them so much! We were returning from a visit to Auschwitz, and I was feeling terribly uncomfortable as a Japanese person. Besides, I was worn out and had little energy for idle conversation, so my replies were perfunctory. Undaunted, he continued trying to engage me.

There is a Japan author I like—now, what was the name?

Haruki Murakami?
No, no, not him. A woman.
Banana Yoshimoto?

He rummaged around in his grimy rucksack and eventually withdrew a French paperback, saying, You need one good book for every trip!

And that’s where I saw her name.

The book was by an author named Pascal Quignard.

The title was Sur le jadis. “From before”—a book about the past.

He flipped through its pages until he found the right passage, then pointed out a word with the dirty, uncut nail of his index finger.

Izumi Shikibu. It was written in italics.

He read aloud to me part of the lines about her, first in French, then in rough English translation.

The “source” of Izumi Shikibu is in her name—for that is what Izumi means. A source, an origin, water welling up from the earth.

That’s what he told me was written there.

The bus reached the station in Krakow soon after, and we parted without exchanging contact information. Yet, strangely, the conversation stayed with me, and as soon as I returned to Japan, I opened up Izumi Shikibu’s diary.

Already the tenth day of the Fourth Month has passed, and, like impossible dreams glimpsed from a world of deepening sorrow, I watch the greenery brighten even as the shade beneath the trees grows darker.

A little over a thousand years after Izumi Shikibu wrote these opening lines, I found myself standing before the spring where, legend had it, she had first been washed after being born.

I was in Ishikawa, a town nestled in the mountains in the prefecture of Fukushima.

But visiting that spring wasn’t the main reason I was there—rather, I was in Fukushima as part of my research into the wartime Ni-gō Project. Radioactive ore from the area had been excavated and studied as part of the quest to create a “uranium bomb”—that is, a nuclear weapon—for the Japanese Empire.

I had spent the past nine years researching the history of radiation, starting with Marie Curie, as well as Japan’s development of nuclear weapons. In fact, this quest of mine had been sparked by a passage in my father’s diary, the one I’d been carrying with me on my previous trip.

I’d found the following passage, which was from his 17th birthday:

Spent the morning grinding wheat into flour and chopping firewood. In the afternoon, Ichikawa came for a visit. Still managed to finish reading Madame Curie: A Biography.

So moved by this noble soul who so loved science.

This was the beginning of the first spring after Japan’s defeat in World War II in 1945.

As I stood there looking into the waters of Izumi’s “source,” I thought of these strange correspondences—these things sur le jadis, from the past, from before.

Saipan had been the intended target for the “uranium bomb” Japan was trying to create. If Saipan were taken back from the Americans, the reasoning went, then the Allies would lose their refueling location for flying to the Japanese mainland, and the air raids would stop.

In the days before defeat, word of the top-secret “uranium bomb” development project leaked and spread throughout Japan like wildfire.

It was said that a matchbox-sized piece of it could blow New York City away.

If only Japan were able to make this bomb, the war would be won. It would be a true kamikaze—a Divine Wind.

Ten kilograms of uranium-235 were needed to create the uranium bomb.

Japan eventually asked Nazi Germany to supply them with this necessary uranium. And in fact, it ended up packed into a U-boat that began its journey across the ocean floor under the direction of the Japanese Empire. Before it reached its destination, however, Germany surrendered to the Allies. The two Japanese soldiers assigned to accompany the packet in the U-boat swallowed poison and died, their bodies dumped into the sea, the uranium they’d shepherded never reaching its destination.

Alongside this endeavor, however, radioactive ore continued to be excavated from the earth around Ishikawa as part of the quest for materials to make the uranium bomb domestically. Ironically enough, though, before this quest was completed, two nuclear bombs were dropped on Japan.

After I completed my tour of the site of the former Institute of Physical and Chemical Research Rare-Earth Element Production Facility No. 806, as well as various other former excavation sites where the ground was still studded with quartz crystals, I decided to stay at Nekonaki Onsen, or Cat’s Cry Spring.

Its name derives from the story of Izumi Shikibu’s cat, who, legend has it, cried and cried for its mistress after she left for the Heian capital until it became stricken with illness. Near death, it dove into the spring’s waters one day and, miraculously, emerged cured completely.

I sank into the radium spring and looked into the perfectly clear water.

I thought of the past, and of the future.

In other words, by the time it decays, the age we’re living in now will be even more distant in the past than the Heian Period when Izumi Shikibu lived is to us now.

The accident at the Fukushima Daiichi Nuclear Power Plant occurred three years after I returned from my trip tracing Anne Frank’s footsteps.

My father has now passed on. He is no longer with us.

As the Fourth Month approaches once more, I watch as the trees turn their brilliant green. And I watch the shade beneath them grow darker. 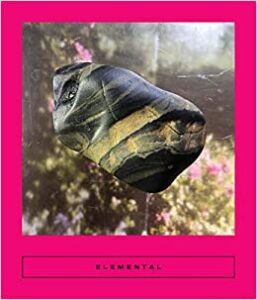 Elemental is available now from Two Lines Press. This piece was originally published as “泉/ I Z U M I,” in Seishun to dokusho, No. 489 (Shūeisha, April 2017). This version has been significantly revised for publication in English.

Brian Bergstrom is a lecturer in the East Asian Studies Department at McGill University in Montréal. His articles and translations have appeared in publications including Granta, Aperture, Mechademia, positions: asia critique, and Japan Forum. He is the editor and principal translator of We, the Children of Cats by Tomoyuki Hoshino (PM Press), which was longlisted for the 2013 Best Translated Book Award.

Erika Kobayashi is a novelist and visual artist based in Tokyo. History, memory, and radiation play an important role in her work. In her novels, Kobayashi traces the history of radiation via the lives of ordinary people over generations—particularly generations of women: mothers and daughters, grandmothers and granddaughters. Through her writing she wants to make the invisible visible, the unseen seen. Her novel Madame Curie to chōshoku o (Breakfast with Madame Curie), published in 2014 by Shueisha, was shortlisted for both the Mishima and the Akutagawa Prize. Her latest novel, the literary thriller Trinity, Trinity, Trinity (2019), about a terrorist attack on the 2020 Tokyo Olympics examines the intertwined histories of the Olympics, fascism, and nuclear technologies. “Precious Stones” was included in the collection Kanojo wa kagami no naka o nozokikomu (She looks into the mirror), published by Shueshia in 2017. (Photo by Mie Morimoto) 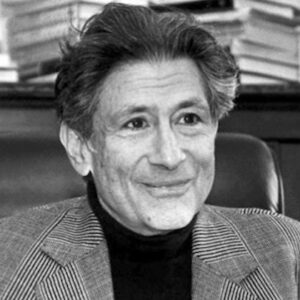 Long after his death in 2003, Edward W. Said remains a partner in many imaginary conversations. For those who knew him, the exchanges...
© LitHub
Back to top
Loading Comments...