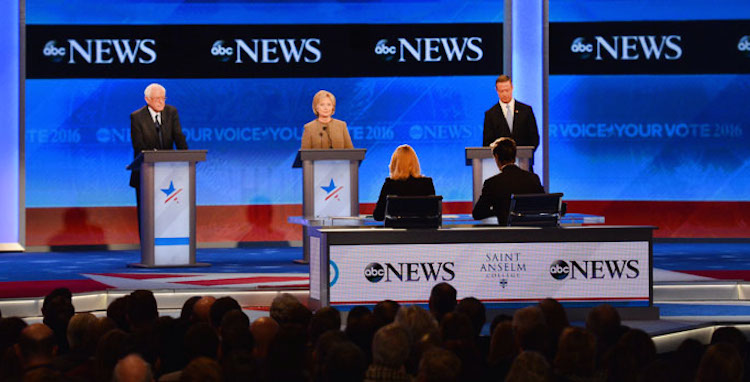 We are proud and delighted that Literary Hub continues to offer us a platform for pointing out and translating the deliberately deceptive language—or Spinglish, as we prefer to call it—used by the candidates during the Presidential Primary Debates. The December 18th Democratic confab at Saint Anselm College in Manchester, New Hampshire, featured an impressive array of such verbiage. Here are the highlights:

regime change. Our virtual hats are off to both Hillary Clinton and Senator Bernie Sanders for using this classic term that, as authors John Stauber and Sheldon Rampton have written, was coined to make “the project of overthrowing a foreign government through a military invasion” seem “tidy, efficient, and rational.” And Clinton gets an additional doff of our figurative headgear for prefacing her charge that Senator Sanders “voted for regime change with respect to Libya” with another iconic spin phrase: “With all due respect.” Whenever you hear these words, you can bet that some profoundly disrespectful sentiment is just around the corner. (Not to be outdone, Sanders offered Clinton his “due respect”—although not necessarily all of it—before reminding her that she had voted for regime change in Iraq.)

“the debates we have been allowed to have so far.” When Martin O’Malley made the point that the third Democratic debate was different from the previous two because America had been “attacked by jihadi terrorists” in the interim, he also managed to slip in a not-so-subtle reference to one of his favorite campaign issues: that the Democratic National Committee has stacked the deck in favor of the odds-on favorite, Hillary Clinton, by scheduling a minimal number of debates at which the candidates behind her in the polls would have an opportunity to confront her.

“[ISIS is] going to be showing videos of Donald Trump insulting Islam and Muslims in order to recruit more radical jihadists.” This attack by Hillary Clinton on Donald Trump’s virulent anti-Muslim rhetoric was pointed, powerful, and effective. But it also qualifies as Spinglish because, as the Tampa Bay Times’s Pulitzer Prize-winning website PolitiFact points out, there’s absolutely no evidence that ISIS has made or used any such videos—at least so far. “For now,” PolitiFact concludes, “it seems that Clinton has turned speculative left-of-center rhetoric into fact.”

gun safety measures. According to gun advocates, the Second Amendment’s stipulation that “the right to keep and bear arms shall not be infringed” renders all efforts to control the sale of firearms unconstitutional. But what voter could argue that safety measures are unconstitutional? Heck, they’re just common sense. Hence Hillary Clinton’s use of the term “gun safety measures,” which she employed twice during the debate without mentioning “gun control” even once. (Thanks to Kent Kaiser, Ph.D., for calling this to our attention!)

“The billionaire class” and “a handful of billionaires” were referred to on several occasions during the debate by Bernie Sanders. The Republicans typically call these very same folks America’s job creators, and while Sanders opines that they’re “going to have to start paying their fair share of taxes,” the GOP argues that “we’re going to have to start relieving the unfair tax burden that they have to bear.”

glitches. When Martha Raddatz confronted Hillary Clinton about fundamental problems—such as sharply rising health care premium costs and significant increases in deductibles—attributable to the Affordable Care Act (or as Republican spinmeisters have succeeded in rebranding it, “Obamacare”), Clinton used this deft and dismissive term to downplay them.

“Information came to our campaign.” This is how Bernie Sanders characterized the discovery by members of his staff that there had been a security breach in the Democratic National Committee’s Data System that made it possible for them to view information in the Clinton campaign’s highly confidential voter information files. Sanders’s use of the passive voice was a textbook example of Spinglish because it led listeners to infer that his team had done little more than inadvertently gain access to the Clinton research. In reality, according to Bloomberg News, several Sanders staffers immediately set about copying and saving as much proprietary information as they could about likely voters in Iowa, New Hampshire, South Carolina, and several other early-primary states.

“There’s always a retrospective to say what mistakes were made.” Hillary Clinton responded to Martha Raddatz’s inquiry about what responsibility she bore for the chaos in Libya following the overthrow of Qaddafi by resorting to the passive voice (just as Bernie Sanders had done in addressing his staff’s accessing of Clinton’s proprietary voter files). Indeed, Clinton’s comment echoed Nixon press secretary Ron Ziegler’s famous “mistakes were made” non-apology during the height of the Watergate crisis, which the late columnist, speechwriter and language guru William Safire memorialized as “a passive-evasive way of acknowledging error while distancing the speaker from responsibility for it.” But Clinton did Ziegler one better by suggesting that, with the benefit of hindsight, critics never fail to point out things that went wrong. May the Force be with her.

[AUTHOR’S NOTE: We collected these terms, as we do after each debate, as a public service (or, as some have insisted on calling it, a public self-service). Evidence that we are offering these compilations for the purpose of promoting our recent book, Spinglish: The Definitive Dictionary of Deceptive Language, is purely anecdotal.