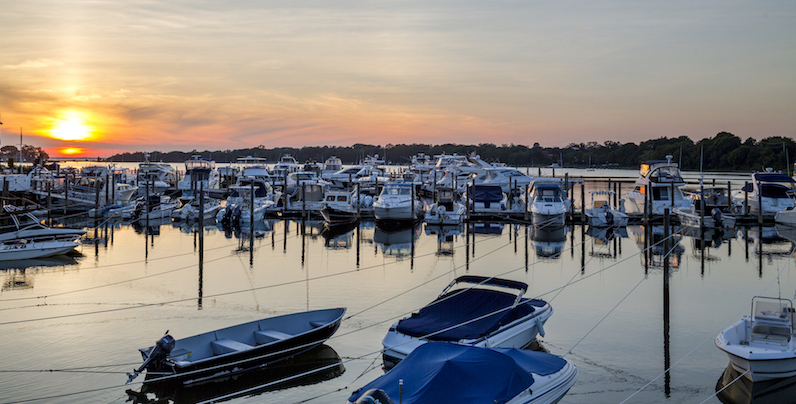 A Literary Outpost on the End of Long Island

Driving out east to the Hamptons today evokes a certain image: ritzy parties attended by Alec Baldwin and Gwyneth Paltrow; massive mansions owned by Jennifer Lopez, Sarah Jessica Parker, and their celebrity counterparts; days spent picnicking on pristine beaches inhaling the smell of water and crisp winds; glamorous “all-American” barbecues and Fourth of July cocktail parties. Over the summer, renting accommodations is about on par with housing costs in nearby New York City. It’s the place, after all, that notable residents of America’s global city go to relax, unwind, and vacation outside of the concrete jungle, essentially the summer spot for East Coast elites. Baron’s Cove is no different—its well-dressed guests can be found dining at Chopped winner Jay Lippin’s restaurant inside the resort, drenching themselves in sun rays on wraparound balconies or, occasionally, appreciating a piece of work from a big city author.

New York and the literary social scene have a storied companionship: from Truman Capote’s 1968 Black and White Ball and Beat gatherings at the White Horse to Walt Whitman’s bohemian groups at Broadway and Bleecker, the literary table at The Algonquin Hotel, and the likes of Ernest Hemingway, Ezra Pound, Dylan Thomas and ee cummings making the Minetta Tavern their watering hole, New York City has birthed, bred or hosted nearly every revered American bibliophile, real and fictional.

Classic American writers of yore, equivalent to today’s celebrities in their heydays, also visited the Hamptons while living in New York City. In the prime of many writers’ careers, they could be found dipping their toes into the Atlantic Ocean, walking the coastline, searching for inspiration and revelling in each other’s company. 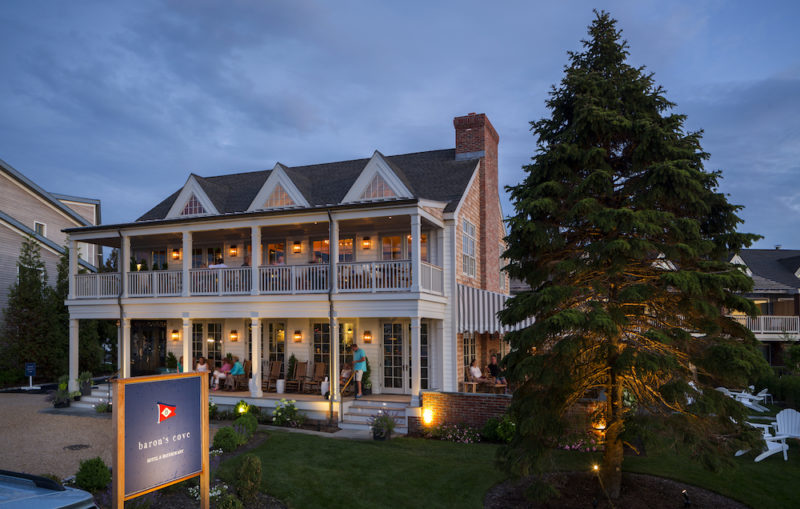 Baron’s Cove was once one of those Long Island hotspots for literary geniuses. The Sag Harbor waterfront resort is now home to pristine grounds and 67 charming rooms after it underwent a massive, year-long renovation in 2014. The hotel boasts a new building, pool deck, restaurant and living area. It’s a family-friendly resort bouncing with the upper classes of all ages horseback riding, playing tennis, and jet-skiing.

In its former iteration, though, Baron’s Cove was a motel, bar, and restaurant that drew some of the greatest writers in American history. Sag Harbor resident and Pulitzer Prize winner John Steinbeck frequented the older building and, wandering the hallways, visitors don’t have to look very hard to find the Of Mice and Men author’s aura. The hallways and common areas boast photographs of the Sag Harbor of old, inviting viewers into Baron’s Cove’s rich history with photographs and whale bones (whale watching was a big Sag Harbor past-time). Framed in simple shadow boxes and picture frames, the relics can be found hanging on the walls like windows into the past, blending into the old-meets-new aesthetic that Baron’s Cove has come to adopt in it’s renovation.

In the prime of many writers’ careers, they could be found dipping their toes into the Atlantic Ocean, walking the coastline, searching for inspiration and revelling in each other’s company.

Wallpapers, wooden chairs and exposed beam ceilings pay homage to the 60s, brought to modern times with pops of jewel tones; shades of royal blue, emerald green, and crimson adorn winged chairs, pillows, and glassware, and stand proudly beside wooden mantle pieces that transport guests to the era in which Steinbeck himself could have occupied a chair there, basking in the glow of a wood-burning fire.

Steinbeck gets another nod in the hotel’s offerings, too—the Travels with Charley package, named for his 1962 book of the same name, honors his trip across America with his wife Elaine and his dog Charley. Steinbeck began the journey in Sag Harbor by venturing from Long Island to Connecticut, a commute easily achievable in a few hours. At the start of his journey, he immediately starts questioning himself, wondering why he wants to leave the comforts of his home, his wife and the place he has grown accustomed to. It’s old age motivating him, he decides, because he may never have the chance to experience this again. Later, Steinbeck would use Sag Harbor as the setting for The Winter of our Discontent, though he renamed it New Baytown in the book. “Our town of New Baytown is a handsome town,” he wrote, “an old town, one of first clear and defined whole towns in America.” 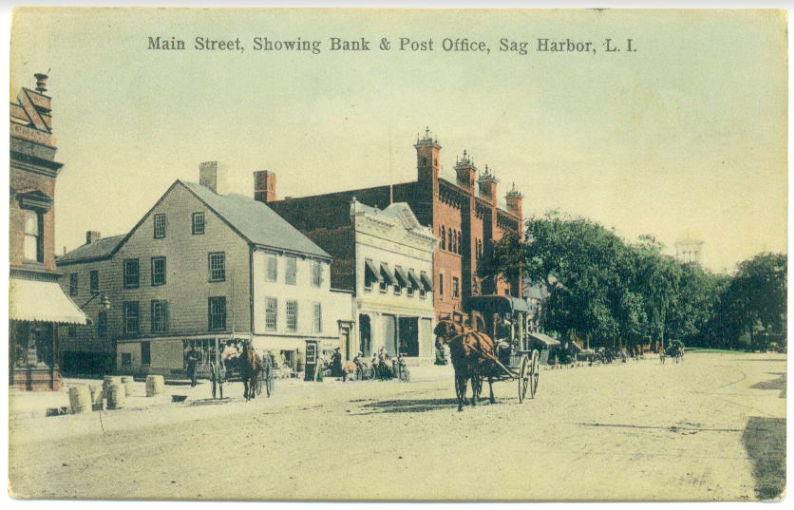 Steinbeck owned a cottage on John Street in Sag Harbor from 1955 until his death in 1968, and he wrote The Winter of Our Discontent in his home overlooking the Long Island Sound. When he wasn’t writing, Steinbeck would bring Charley to The Black Buoy bar, which is now LT Burger on Main Street, or he’d dress as a fisherman in an attempt to go unnoticed and walk the streets. He was hardly discreet, though, and a locally famous tale recounts a resident asking him if he was the award winning author. “I’m John,” he replied. “Just call me John.”

Steinbeck owned a cottage on John Street in Sag Harbor from 1955 until his death in 1968, and he wrote The Winter of Our Discontent in his home overlooking the Long Island Sound.

Sag Harbor also got several shoutouts in Herman Melville’s Moby Dick, including in the twelfth chapter of the classic novel as Ishmael describes cannibal and whale-harpooner Queequeg’s decision to remain a “heathen” after witnessing poor behavior by Christians: “But, alas! The practices of whalemen soon convinced him that even Christians could be both miserable and wicked… Arrived at last in old Sag Harbor; and seeing what the sailors did there… poor Queequeg gave it up for lost.”

Harlem Renaissance leader, jazz poetry pioneer, novelist, and playwright Langston Hughes frequented Sag Harbor to visit historian William Pickens, and the two would recite poetry on Pickens’ porch. Pickens talked about it with Hamptons Magazine, saying, “Langston Hughes used to come out in the 1950s and stay at my parents’ house, read poems on their porch. He was a college roommate of my father’s and an old pal of my mother’s. He even wrote her a poem back in 1925.” In return, Hughes introduced Pickens to the woman who would become his wife, Emily Montier Brown. Years later, Colson Whitehead would spend his summers visiting the house and wrote a semi-autobiographical novel appropriately titled Sag Harbor. 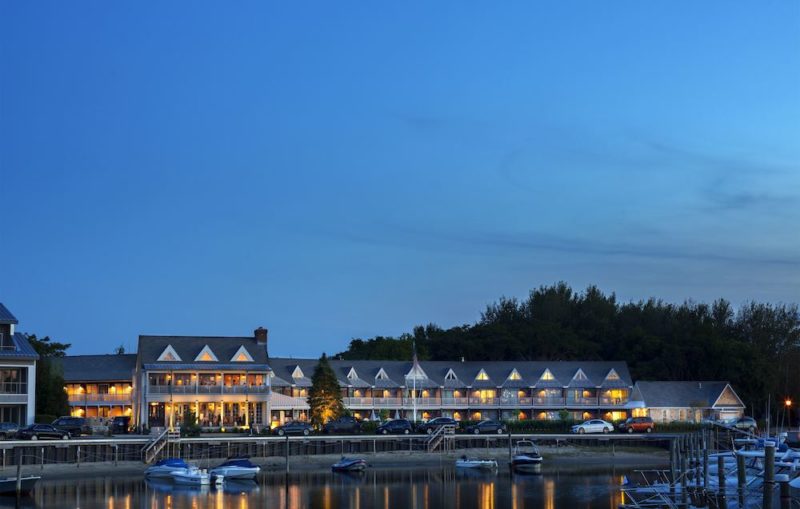 The Hamptons hamlet was also home to many other notable authors. Nathaniel Hawthorne’s son Julian lived on Main Street with his wife and eight children, though he left often to visit his secret family in Manhattan. The monologist Spalding Gray wrote a majority of his works, including Swimming to Cambodia at 74 Madison Street, where he lived in his 19th century Victorian home. The Feminine Mystique author Betty Friedan summered on Sag Harbor’s Glover Street, even hosting Sunday lunches. Playwright Lanford Wilson was also known to walk down Main Street. He was regarded around town as an excellent cook, and was often seen tending to his Suffolk Street home’s immaculate garden. The Last of the Mohicans author James Fenimore Cooper based his Natty Bumppo character on a Sag Harbor resident. For his time there, Cooper stayed at Duke Fordham’s Inn, which has since been turned into Muse Restaurant. Author Thomas Harris created the famous character Hannibal Lecter from Silence of the Lambs above Marty’s Barber Shop, which is now present-day Salon 66. (To this day, Harris still resides in Sag Harbor part time, where he frequents the upscale American Hotel.)

Up the road from Baron’s Cove, the John Jermain House on Main Street was once home to British writer Wyndham Lewis and poet and author Kazimierz Wierzynski, a member of the Polish academy of Literature. The gray house, tucked beneath full-grown trees and perfectly manicured gardens, is now a privately owned home on a street of well-maintained abodes, boasting a white picket fence and black shutters. It’s a design aesthetic oft-adopted by the new owners of literary homes, as the houses that once belonged to Hawthorne, William Mulvihill, Lady Blackwood and Friedan are all similar.

The 1960s life of Baron’s Cove, though, was especially vibrant. In addition to John and Elaine Steinbeck, prominent guests like Paul Newman, Art Garfunkel and Richard Kind, Jackson Pollock, Willem and Elaine de Kooning, Truman Capote, George Plimpton, and Kurt Vonnegut were known to regularly gather in the restaurant and in the hotel. In later years, Billy Joel could be seen hanging out at Baron’s Cove. 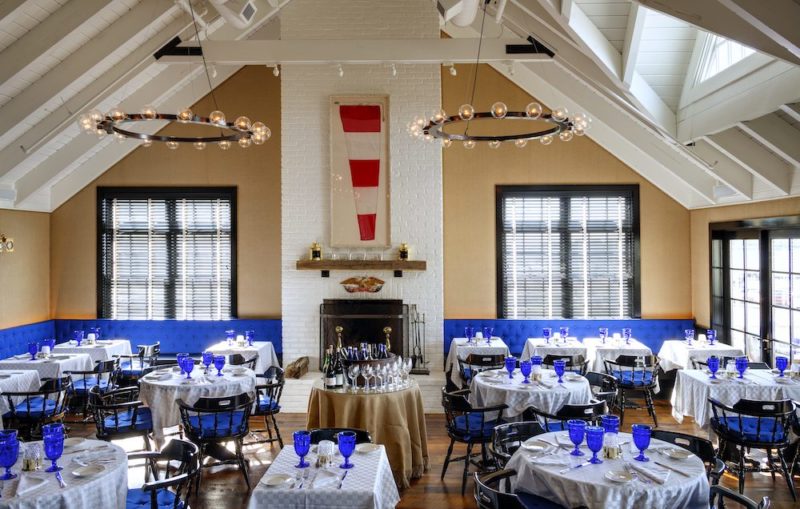 The 50th anniversary of Steinbeck’s death recently passed on Dec. 20, and Baron’s Cove brings guests back to a time when the author found inspiration in Sag Harbor. In memoriam, the John Jermain Memorial Library is collecting oral histories from residents who remember Steinbeck’s time in Sag Harbor, as well as offering talks on Steinbeck and screenings of Of Mice and Men and East of Eden.

While the town of Sag Harbor may have evolved to accommodate the upper-middle class summer vacationers of New York City, locals continue to pay homage to the man who followed his dog through the woods, who would chat with the locals at Cove Deli (which still exists), and who frequented The Black Buoy bar with Charley. Local historian Anthony Garro still tells the story of the time a complainant decided that the dog shouldn’t be allowed in The Black Buoy. Steinbeck listened at first, not wanting special treatment, and began to visit the bar alone. He looked dejected and sad without his companion, so the bartender took a straw vote. As it turned out, everyone but the complainant supported Steinbeck. They decided that, even though it violated New York State code, Charley could stay a bar regular.

Erica is a freelance writer from Toronto who loves to cover culture, from books to travel and everything in between. She received her graduate degree in journalism from New York University.

John McPhee: Seven Ways of Looking at a Writer 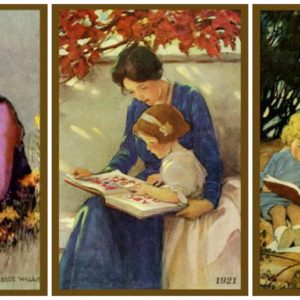 The enchantment of a piece of writing delivered by the human voice may come on little cat feet, so to speak, slipping in so softly...
© LitHub
Back to top
Loading Comments...