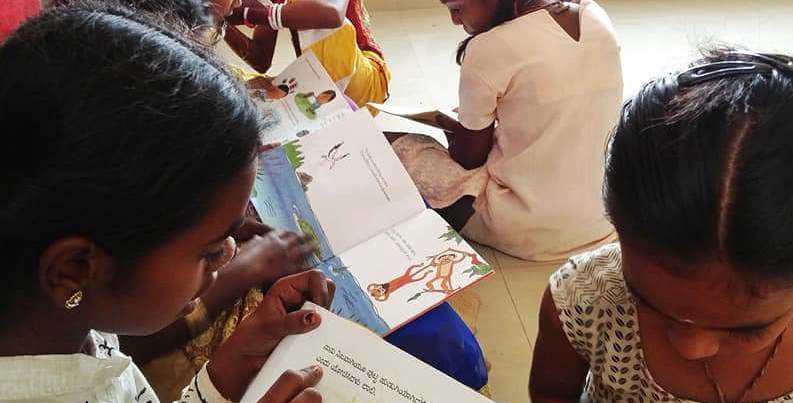 Supporting the Children of the City's Ragpicker Community

When I arrive at Bangalore’s Buguri Community Library, Sangeetha Ramesh is reading aloud from a Kannada children’s book to four little girls. The late afternoon rays highlight a colorful wall mural depicting two children playing with a spinning top, called “buguri” in Kannada, from which the library derives its name. Ramesh, who helps run Buguri, patiently translates my questions about it to the girls. Shalini, 10, only smiles bashfully, but Jassy, 11, enthusiastically tells me, “We like it here very much. In fact, if our parents don’t allow us to come here, we get angry.”

Jassy and Shalini are among the many children belonging to 200 families of informal ragpickers living in nearby slums who have regularly visited Buguri since the library opened in January 2017. Buguri has since then expanded considerably, housing over 2,000 books in Kannada, Hindi, English, and Tamil, while two more branches have opened in neighboring cities of Mysuru and Tumkur, reaching about 600 children in all.

The idea to create a community library emerged from the Bangalore-based nonprofit, Hasirudala, which works with over 10,000 ragpickers, looking after the welfare of this particularly marginalized community and reinstating dignity to the work they perform. Ragpickers collect, sort, and segregate waste before trading it; they perform an invaluable role in the city’s basic waste management, cleaning up a significant proportion of waste that it generates.

“While working with the adults, we realized that their kids are even more vulnerable,” Lakshmi Karunakaran, the library program coordinator, said. “Given that the ragpickers are entrepreneurs loaded with numerous responsibilities, they are unable to create a engaging positive environment for their children or send them to schools despite the intention.”

An educator and communications specialist, Karunakaran said that she had been interested in Hasirdula’s work for a long while, and Buguri was the result of their desire to expand their children’s program along with her desire to work with children of marginalized communities.

“I had initially seen the library as a space of learning only to gradually realize that it instead became one of refuge.”

Lakshmi realized that children in the community lacked a safe space after school and often spent those hours alone at home or on the streets. She envisioned creating such a space and allying it with a long-term engagement program in form of a community library. She spent time researching the community library movement, met friends running both international and local community libraries, and came to understand how to fund those spaces along with the importance of adding children’s programming to a library space. She singles out Delhi’s Community Library Project as a particularly inspiring model, crediting its co-founder, Mridula Koshy, and her team for sharing their journey with her. “The work they were [doing] was overlapping with our mission, the kind of marginalized community we wanted to engage with,” 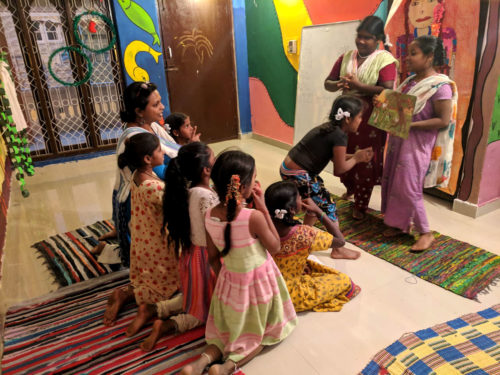 The team decided to situate the library in south Bangalore’s neighborhood of Banakshari in part because Hasirudala had already been working with the community there for the last several years; they also wanted to address several issues in the neighborhood that required urgent intervention, including child marriage, child abuse, and drug addiction. One of the biggest challenges

Karunakaran encountered was finding a physical space in which to house and enable free access to it. “Space is at a premium in slums, there being so little of it,” she said.

She also had to contend with the implications of lower-caste ragpickers’ presence in a staunchly upper caste neighborhood; for all their contributions, the ragpickers are often perceived as thieves and treated with hostility. Neighbors perceived the children as unhygienic, disallowing them from playing in the streets. “In India, class and caste dynamics greatly define the city’s demographics. In this situation, it meant months of searching for a place: eventually finding it was nothing short of a miracle,” she said. What worked, in the end, was negotiating with leaders of the neighborhood’s dominant and powerful religious organization to convince them to allocate two small rooms on the topmost floor of an old age home they owned.

When Buguri first opened its doors, Karunakaran said the majority of the children she observed had limited reading skills. Karunakaran and her team of volunteers engaged them through reading aloud in groups or individually. When the library first started coming together, approximately 50 kids turned up after school on the second day to request books; now, about 20 to 35 children voluntarily come every afternoon to participate in these reading groups, Karunakaran said. “We allow this flexibility in which the child can walk in and out any time he wants. I feel that the children really appreciate this and it’s one of the reasons why Buguri has been a successful model,” she said. “I had initially seen the library as a space of learning only to gradually realize that it instead became one of refuge … I had to slow down the program to give the children time to own the space, to soak in the idea of it being quiet, calming, and bringing them joy.”

Karunakaran said she’s observed the community become less resistant to the library, recalling the initial days when she used to arrive at the library and find many neighbors waiting there with various complaints. “It’s a lot more peaceful now, there have been no complaints in the last few months,” she said, while acknowledging that it will take a lot more time for the neighbors to get involved with the library.

Describing Buguri as “a larger social experiment where you can bridge gaps between class and caste divides among people,” Karunakaran notes that there has been some interaction between children of the neighborhood and the slums. Last month, the library hosted a Read Aloud event in which 150 children participated, half were from Buguri and the rest from other communities, including children living with HIV-positive parents, children of domestic workers, and those with special needs.

Buguri is open for four hours every day of the week and performs multiple roles, hosting other events like art workshops and art therapy sessions. Having run a weekly art therapy session separately for boys and girls during the last year, art therapist Pallavi Chander said that the library “has become a container for them to express their emotions and be themselves using the medium of stories, music, and visual arts,” and that sessions provide a space for children to respond to events in the community.

“The kids have bonded with one another over these issues,” she said. “They say that ‘We never talk at home but we do over here.’”

Priyanka Sacheti is a writer based in Bangalore, India. Having grown up in Oman and educated in United Kingdom, her work has appeared in Popula, The Establishment, Art Slant, and The Guardian and more. She is presently an editor at Mashallah News. Her literary work has appeared in various literary journals and anthologies. She's currently working on a poetry collection. She tweets @priyankasacheti1 and explores her writing and photography on Instagram at @anatlasofallthatisee. 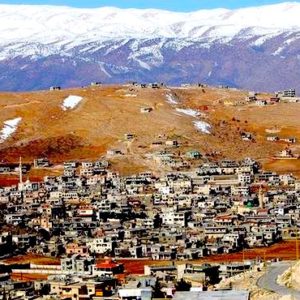 In May 2017, I traveled with the artist Richard Mosse, who was taking thermographic photographs of the refugee camp of Arsal...
© LitHub
Back to top
Loading Comments...