A House Between Earth and the Moon 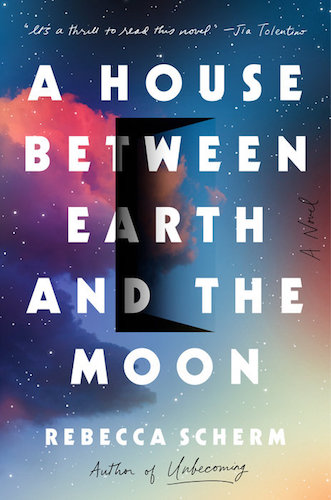 The following is excerpted from Rebecca Scherm's new novel, A House Between Earth and the Moon. Scherm is the author of Unbecoming. She lives in California with her family.

The first video came from nowhere, and then everybody had it. Mercedes was naked and having sex with somebody. You could only see his hands and arms. She was laughing, smiling a lot, and saying some stuff that was pretty startling. She wasn’t making, like, sex faces, not the ones Mary Agnes had seen before, but then Mary Agnes had never had sex, so how would she know anything?

Who was the boy? Was it Jaspy? He was Mercedes’s boyfriend. The girls weren’t saying, the girls were staying home. Not me, Jaspy said at school, I don’t do that. Which that did he mean? He sent the dump memo on the spot, and public, too.

In the Mercedes video, Mary Agnes saw a clue: a few of Mercedes’s long, dark hairs appeared and disappeared into some plush mush under her head. Mary Agnes remembered petting that rug.

She scrolled weeks back in her phone to find the party. Mercedes. Ivy. The green-bloody bathroom. Walking to the party, hair like swinging vines. The basement, Mercedes in a purple vest, one leg bent under her. Pills from the snack pack, two by two, Nicky Zoncu waving his hands like he was alone on an island. And then her screen went black. She’d passed out.

When the video began again, she braced herself, and here was the stumbling, the wobbling, and finally, Ellis, the back of his head. She paused the video. He hovered over Mercedes, arms flexed on either side of her.

She did not want to go on, now.

Play. Ellis moved to the side, plopped down next to Mercedes. She was still wearing her purple vest. Ellis turned to face Mary Agnes. “Did you need something?” he asked her, his face pleasant and alert.

She felt as though he was watching her this very moment.

She must have tried to shake her head, because the whole image jolted violently from side to side like a rocking boat.

Mercedes was drooling down her cheek.

Ellis looked all around, his eyes like sparkly summer swimming pools.

She looked at the body on the floor.

“You’re actually medium pretty,” he said. “With the green hair.”

“Tenkoo,” she said, sounding horrifically close to tears. “Tenkoo so mush.” A very long pause and then: “You, too.”

“Thanks,” he said. “Can you help me with something?”

His face bobbed up and down as she nodded sloppily.

“Can you stand behind me—yeah, it’s okay, just lean on me, like that, that’s fine. Okay, now, I’m going to hand you her hands—”

Mary Agnes laughed at that, how funny, hand you her hands.

“Ha, yeah, so I’m going to hand you her hands one at a time, and you just hold them here, okay? Whoa, okay, let’s try it again. Great, just like that.”

She was holding Mercedes’s warm hands together in her own behind Ellis’s neck. Her stomach must have been touching his back, their bodies right there touching each other. “Your nice nick,” she said. He didn’t answer.

She watched it again. What did he do? What did she do? Did Ellis and Mercedes do anything before she passed out? What did Mary Agnes help him with? She tried to find out about the drug they took, what it could do to you if you mixed it with alcohol, how much of this and how much of that, but druggie people were really fucking vague. She’d never even taken drugs before! But she kept searching for an answer, because she was desperate for assurance that she was super, super fucked-up that night, inexperienced baby that she was, and there was nothing she could have done to understand what was happening. That she was not there. But there was no amount of assurance that was going to make this better, and she still didn’t know what this was, what what had happened.

She knew the right thing to do was to show Mercedes the footage. But there had to be another right thing, because she couldn’t do that one.

“Dad?” She thought she was dreaming.

She picked up the screen on her nightstand and saw her dad’s wonderful worried face staring intently at hers. He had a new weird beard, patchy scraggles, bending all directions. She wiped the screen with her sleeve. Crumbs.

“Yeah,” she said. “Kind of swampy now. But your hair,” she said, tapping her chin, trying to keep her smile under control. “Wow.”

“Listen, we might not have much time, and this is important—does your mother know you inserted the phone that Sensus sent for her?”

“No.” She covered her ear, as if her dad could reach through the screen and grab the tab, yank it out. “I mean, she threw it away, practically smacked the drone out of the air—”

“I should go wake her up,” Mary Agnes said.

“No—I don’t know—do you think we should wake her up?”

“I don’t want her to be mad at me because I didn’t wake her up.”

Her mother was balled up under her covers with a very old white noise machine roaring beside her head. Mary Agnes turned it off. “Mom,” she said. “Wake up. It’s Dad.”

Her mother jolted up. “Your dad? Here?”

Her mother was still bleary and dumb, rubbing her eyes. “I wasn’t notified of a call.”

“Sorry,” Mary Agnes said. “I guess I was dreaming.”

The next video was of Mary Agnes. Her own face: uncertain, with brief, infrequent smiles. Her own eyes, their slow blink. Her own Salamander hair. Her own round, pinkish arms. Her own stomach, that mound of jiggle under her belly button. Her belly button. Not her breasts, not by a long shot. These were rounder. The nipples were totally different. In the video she was having sex with Ellis and she did not say one word.

She’d never even kissed anyone.

On Sunday afternoon she went over to Mercedes’s house. One of her dads answered the door and when he saw Mary Agnes’s green hair, his jaw tensed. “No art projects, okay?”

Mercedes was standing in the middle of her room. Her sheets were wadded and flattened like she had just jumped out of bed.

Mercedes gasped like she would cry if she could but it was all used up.

“I don’t know who it is,” Mercedes said. They were still standing in the middle of the room. “It has to be fake. That’s not my—and it’s not in my archive— but it’s so—”

Not her boobs, Mercedes said, crossing her arms over her chest while she and Mary Agnes watched the two videos side by side.

“Do you know how he got your face?” Mary Agnes asked her. “Like that, smiling and stuff?”

They got to the part Mary Agnes did not want her to see. She sat on her hands and watched with Mercedes as Ellis instructed her to hold Mercedes’s hands around his neck. Her face was burning, and she was waiting for Mercedes to turn and say, you helped him! But Mercedes was chewing on her hoodie string.

“This is why mine looks so real, because of the arms.”

Mary Agnes had seen plenty of fakes, but never a sex video of someone she knew, someone whose face and arms and knees and voice all matched up, even if the privates (that word, unused since she was a little kid, jumped up for service) were taken from someone else. She couldn’t see the seams. If there were not a video of herself, she would still believe it to be real. Everyone else did.

Sometimes Tess watched Mary Agnes’s Views through her fingers, her hands over her eyes, but she couldn’t look away. She’d known that Mary Agnes had Meg’s new phone because of the call from her father, but there was no reason that Tess should have had access to her feed. Her father was on Parallaxis, and Tess monitored and coded his Views every day. But her subjects were a fixed group, quarantined on the station. Not daughters in Michigan.

Before the subjects had signed on for Parallaxis, their families had all been unsecured, public users of Sensus phones. They had all been heavily scraped, had phones of varying ages, a few of them even bought used. To be called by someone on the station, they had to be given new phones and privatized, scrubbed secure—a perk, and not a cheap one.

At first Tess didn’t code Mary Agnes’s choices while she watched her, unsure if Mary Agnes was part of her assignment or whether watching her feed was even permissible. Permissible, why had she thought that word? Not legal, not ethical, but permissible—as though Tess were a child.

There was no one to ask at Sensus except Katherine Son herself. Katherine had set it up that way.

When Tess called to ask, Katherine paused before answering. “Then it’s not Meg’s phone anymore. If you see the feed, then she’s using the phone. If she’s using our phone, she’s testing our prototype.”

But Katherine was already gone.

“You won’t be looking at them,” Katherine Son had said to Tess before she started on the Views project, the day they’d met on the Sensus campus. “This is embodied cognition, right in your wheelhouse. You’ll be looking through them, eye tracking from inside. Think of your subjects as their eyes—as lenses, and each lens will show you the same picture differently. You’ll watch them making sense of their worlds, moment to moment. Constructing, distorting. We train the algorithms to predict any individual human behavior by looking through these individuals.”

Mary Agnes had a good life, a loving family and a decent school, but it looked so lonely through her eyes that Tess thought she could feel it herself, like an empty stomach. Watching sixteen through the eyes of a sixteen-year-old was almost as awful as being sixteen again herself.

Don’t drink that, said Tess, the unheard, unseen lifeguard on Mary Agnes’s shoulder. Don’t trust . . . anyone. When Tess was Mary Agnes’s age, she had just moved to California and gotten her first Sensus phone. Afraid to do anything she might regret, she watched the people around her and waited to be sure she knew what to do. Teenage Tess became a whole weather station, observing changes in atmospheric conditions from a stationary position, above the mess and bolted safely in place. How often she had wished she could let go a little bit, but look what could happen! Loosen your grip and try a new friend, a new party, a new drug (bitten in half, good girl)—and next thing, some little shit is using you as a mannequin in his private animation studio.

Tess toggled through her other feeds on the station. Macy was upside down and alone, assembling a cabinet; Esther was smoothing a plum-colored membrane over a wall. Lenore and Malik were floating above a subfloor plumbing cavity, peering into it. Again and again, she came back to Mary Agnes, on Earth.

Please protect yourself, Tess said to the girl, who did not listen.

Excerpt from A House Between Earth and the Moon. Copyright © 2022 by Rebecca Scherm. Reprinted with the permission of Viking, an imprint of Penguin Random House.

A winner of this year's Windham-Campbell Prizes dropped out of the literary scene for 40 years. 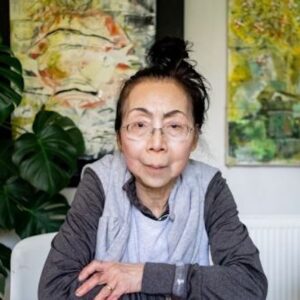