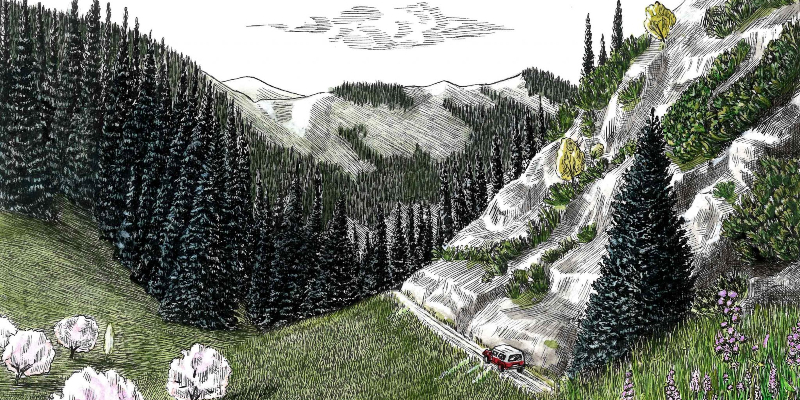 Roger Deakin with Robert Macfarlane on
the Emergence Magazine Podcast

From the Yangtze Valley to Neolithic Mesopotamia to the orchards of Oxford, Roger Deakin sought to understand the origins of the domesticated apple. His essay “East of Eden”—an excerpted chapter from his book Wildwood: A Journey Through Trees—recounts his journey into the wild fruit forests that grow on the mountainsides of Kazakhstan. After Roger’s death in 2006, Robert MacFarlane planted a sapling grown from an apple seed that Roger carried home. As “Roger’s tree” now fruits in his yard, Robert collects the pips to distribute to others, envisioning a “worldwide wildwood of memory-trees.” This essay is narrated by Robert Macfarlane.

In the summer of 2006, my friend the writer, forester, and naturalist Roger Deakin died of cancer, too fast and too young. A woodsman to the last, his pine coffin was decorated with a wreath of oak leaves, and his ashes were given to the earth in view of mature stands of cherry, oak, and silver birch. I was new to death then, but even had I not been, the loss of Roger would still have struck hard to my heart. “I want my friends to come up unstoppably, like weeds,” Roger wrote once in a journal entry, and our friendship, though only a handful of years old, was a weedy one, flourishing out of all proportion to its calendar.

Roger’s abrupt death felt most cruel to me in its lopping of future growth. We had made such plans! To stake out the badger setts in a wood near Roger’s Suffolk home at Walnut Tree Farm, with some infra-red goggles that Roger was confident he could source. To construct a coracle (birchwood frame, cowhide hull), and then paddle it across a meaningful stretch of ocean—or, failing that, across a good-sized pond. There were books to write together, conservation battles to fight, television programmes to make, jokes to tell, and all those unfinished—no, unstarted—conversations that, in the manner of conversations with Roger, would rapidly branch outwards, ending very far from where they had first taken root.

Roger was many things—a filmmaker, environmentalist, campaigner, poet, teacher—but he became best known for his trilogy of extraordinary non-fiction books about nature, people, and place: Waterlog (1999), his classic account of swimming through Britain’s rivers, lakes, estuaries, and lochs; Wildwood: A Journey Through Trees (2007), which describes his years spent traveling through forests and woodland cultures in Britain, Australia, Europe, and Central Asia, as well as chronicling his long family history of radical and community involvement with trees and forestry (“I am a woodlander,” he wrote in the opening pages of that book, “I have sap in my veins”); and Notes from Walnut Tree Farm (2008), which gathers decades of his writing about his home landscape in Suffolk. Roger travelled widely but always returned to that timber-framed farmhouse and the twelve acres of meadow, hedgerow, and copse that surrounded it. This was his fixed point, where one foot of his compass was planted, while the other roved and circled.

What follows here is a chapter from Roger’s Wildwood, to which I have written a short postscript essay that tells—by means of the story of a seed and a tree—how Roger continues to root and branch through my life and the lives of many others, long after his death.

Roger Deakin was a nature writer, broadcaster, and filmmaker who spent most of his life in Suffolk, in a ruined farmhouse that he restored. He is the author of Waterlog: A Swimmer’s Journey Through Britain, Wildwood: A Journey Through Trees, and Notes from Walnut Tree Farm, compiled posthumously from his diaries. He died in August 2006.

Robert Macfarlane is the author of books on nature, place, and people, including Underland: A Deep Time Journey, The Lost Words (with Jackie Morris), The Old Ways, The Wild Places, Mountains of the Mind, and Landmarks. His work has been widely adapted for film, television, music, dance, and stage, and translated into many languages. His writing has appeared in the New Yorker, Granta, and the Guardian. He won the 2017 E.M. Forster Award for Literature from the American Academy of Arts and Letters. He lives in Cambridge, England, where he is a Fellow of the University of Cambridge.

Naï Zakharia is an Illustrator living and working in Beirut, Lebanon. She obtained her BFA at the School of Visual Arts in New York City and works in the mediums of pen and ink, and watercolor. 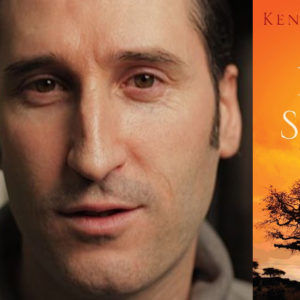