Inside One of America's Elite Cultural Institutions

When one thinks of the American Academy of Arts and Letters (AAAL)—or, indeed, if one thinks of any such similarly august institution, the British Academy, say, or France’s Order of Arts and Letters—a bit of sepia enters the picture: stiff, formal portraits of dead white men in antique facial hair (mutton chops, van dykes), gathered to quietly laud the nation’s artistic traditions, of which they claim to be progenitors and caretakers both.

But one, warm sleepy afternoon last week, upon entering the Academy itself on West 155th Street, the picture was a little different. Though current (and future) academy members were assembled onstage for a class photo (and despite a church-like atmosphere soundtracked by live organ), the sartorial choices on display hinted at rather more lively thinking.

As is the case in most rooms graced by her presence, the eye was drawn immediately to Zadie Smith, sitting front row, stage right, resplendent in a marvelous green suit, purple shirt, and red headscarf. Ms. Smith, there to be inducted as a “Foreign Honorary Member” of the Academy was seated next to Ian Buruma, new(ish) editor of The New York Review of Books, whose red socks, briefly glimpsed as he shifted through assorted introductions, were a perfect accent to Ms. Smith’s outfit. Mr. Buruma was similarly honored for his foreigness.

The afternoon’s proceedings were ably marshaled by Academy President Billie Tsien, who noted she was only the third woman to hold the office, and the first Asian American. Tsien was candid about the afternoon’s program, giving fair warning that “this will be long,” concluding her introductory remarks with, “Let the great rumpus begin!”

What followed was not dissimilar to a small liberal arts graduation program, as assorted awards—45 in total, valued at 1.3 million dollars—were presented in a variety of disciplines; introductions were short and factual, acceptance speeches nonexistent (at least until the final medals).

Literary highlights of this part of the ceremony included Joy Williams (in signature sunglasses) presenting an AAAL award to poet Ishion Hutchinson, who may or may not have been wearing the same red socks as Mr. Buruma; Noy Holland making her way down to the podium from the top row to receive the Katherine Anne Porter Award (also from Williams); and the charming Red Pine, aka Bill Porter, accepting the Thornton Wilder Prize for Translation (looking every bit the North Beach poet c. 1958).

Perhaps the most dramatic moment of the night was the entire room wondering if Thomas Pynchon would make a personal appearance to pick up his Christopher Lightfoot Walker Award in Literature… Just kidding, nobody expected him to be there. His wife, the agent Melanie Jackson, accepted the $100,000 prize on his behalf, and hopefully took an agent’s percentage.

The final act of the “great rumpus” did allow for a couple of speeches, most notably the aforementioned winner of the Spoken Language award, who gave a very good, short version of the David Sedaris we all know and love. He was followed by Ron Chernow, accepting a Gold Medal in Biography, who lamented having to follow America’s greatest living raconteur, calling it one of his “nightmares.” Chernow, though, is a consummate public speaker, relaxed and amiable, and more than held his own.

Perhaps the most heartwarming, emotionally felt moment of the night was saved for last, as Virginia Dajani, long-time executive director of the Academy—and clearly appreciated by its members—received the Award for Distinguished Service to the Arts, in honor of her 27-year tenure. One of Dajani’s many pleasures on the job, as she described it, was the chance to converse with the great artists of the era; one such exchange was a phone call with the artist and illustrator Saul Steinberg, in which he lamented the difficulty of attaining membership in the Academy (which has a fixed number of slots at 250). Said Steinberg: “Membership seems to add 25 years to a life. It us up to you, Virginia, to do something about this unseemly longevity.”

It was a laugh line floated out on a note of melancholy, as the announcement of Philip Roth’s death had come only the night before, making him a last-minute addition to the Academy’s in memoriam list, alongside greats like William Gass, Ursula K. Le Guin, Olly Wilson, J.D. McClatchy, and Tom Wolfe.

A fitting end to the ceremony, with its hint of the renewal that must surely follow the passing of each generation, as the next wave of artists reshapes the culture—and its institutions—in their own image: vivid, diverse, and in full color. 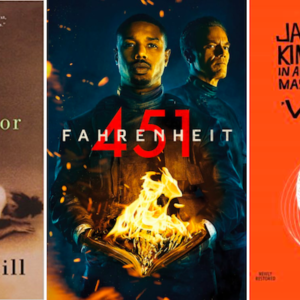 I spent some time this week carefully re-reading Mary Gaitskill's Bad Behavior, a book that is (somehow!) turning 30 this...
© LitHub
Back to top