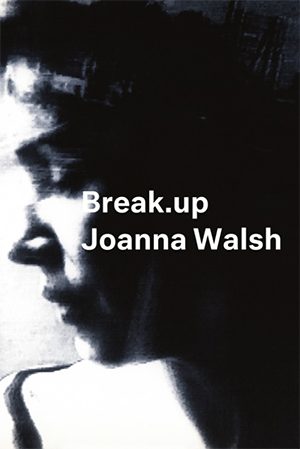 The following is from Joanna Walsh's novel, Break.up. This "novel in essays" chronicles the online relationship between Joanna Walsh and her elusive partner. As she travels around Europe, she waits for emails and texts, contemplating connection and communication in the digital era. Walsh is the author of Hotel, Fractals, and Vertigo, which was shortlisted for the Edge Hill Short Story Prize.

Going south was the best decision I ever made.

The stopping train was full of women and children, through the window a sign for Lyon, clouds occupying 80 percent of the slice of glass. In the buffet car, I sat on a small round stool of fake red leather, facing a long window. Le Train Bleu, traveling towards the sun: at each station, things went south, the drinks in vending machines unfamiliar, the women dressed in ways women in Paris do not: heels, cleavage. Churches mounted geometries of rock. Behind them, concrete factories, cubed.

Outside the train cypresses began. The earth, where it showed through the skin of the hills, was red. Trees turned towards us then turned away. They moved: we were still. The trees further from us turned more slowly: those nearer, more quickly. The pylons changed position, now to the left, now to the right of each other. They moved: or we were moved. The grass on the railway verge blurred. I took out my phone and busied myself filming a video clip of the sky. The sky did not move but a light, reflected in the window, bobbed to show we were mobile. Leaving Paris, friends, I am going to have to get used to the sound of my own voice.

Umbrella pines lifted their hands. The sky received them, blue. 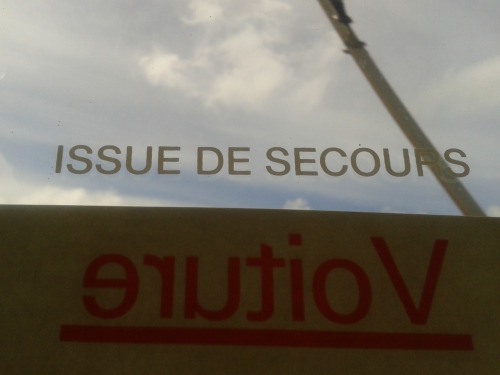 Changement d’air (a change of scene). Paris had air-con. In Nice it’s hot, hot enough for sweat to start beneath each strap that hits the skin.

As I leave the station an ad, ultra-marine, plastered across the blue horizon: an outsize skier, white blades spraying snow, or is it seafoam? Changez d’horizon: soleil et neige a 1hr 30 du bord de mer (sun and snow 1 hour 30 minutes from the seaside). 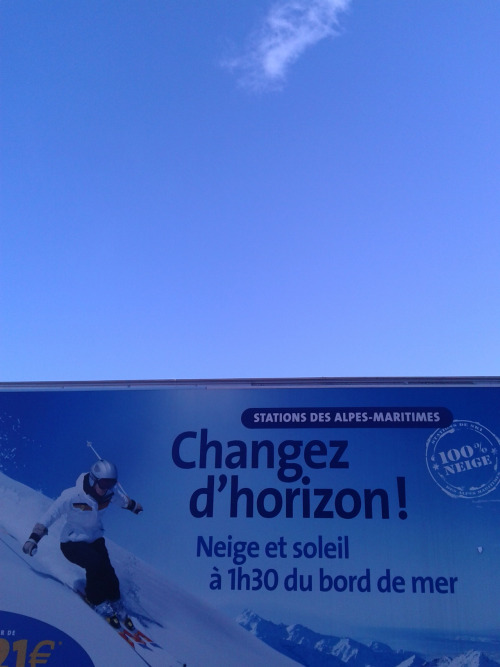 My “postcard” to you is still sitting in my outbox, which is not a public postbox. I choose when my letter is taken. There is no final collection. Email is a dead letter box where messages are left for pick-up agents who might never recognize my face offline. Security in anonymity, it’s part of the system: a dead drop it’s called in US spy movies, making an exchange in the dead letter box of our common language, unable even to segue the name.

My postcard with the little red eye winking between lamp posts in the London dawn; already it’s out of date, a trip I took some time ago (was it only last week?). Was it really real? When I enlarge the picture it fragments into pixels. Lossy compression makes photos more portable. Not real then, just an arrangement of tiny squares. I don’t press send. But I don’t delete. Instead I forget it, and walk from the station to my hotel.

I drag my bag along the Promenade des Anglais, passing between rows of white benches, a spectacle for the old people, of whom there are many, sitting out of the sports lane of rollerbladers and scooters. The two rows of seats face each other, not the sea, and all day long the tourists stare into each other’s holiday faces. Behind them the beach is partitioned—a culture of nature—each section about twenty meters long, each with its own white-awninged café. Most are marked private, exclusive to the guests of particular seafront hotels. Every fifteen minutes a low plane chokes over the sea on its way to the city’s airport. The sky’s skidmarked with contrails: remember, it says, you are on holiday.

“This is not what I came for: a close-up, a reflection of my fragmented self.”

I reach the harbor. Big yachts are lined up like battleships behind weird desert trees. All along the quay Nice is rebuilding. Cranes knock cavities in a gap-toothed parade of icing-sugar hotels. The streets have had too many sweets. Nice looks nice—soft and crumbly—but that’s just the surface. You could break your teeth on the city. The beaches aren’t sand but large round stones. The confectioners here sell chocolate pebbles that look just like them, their sugar shells unforgivingly hard. Take a bite and the joke’s on you.

I make a left into the old town. A short cut . . . perhaps. There is Russian, not French, on the menus but that’s ok; all the restaurants serve the same thing: salad nicoise, moules, pizza, spaghetti vongole. The kitchens, staffed by North Africans, are turning Italian. Beyond the restaurants the shopping zone sucks me into its tiny vacuum of aspirated streets. Tourists glance up from the narrow gullies to elsewhere, above them signs for the café de Turin; the Quai des Etats-Unis. Nice, tricksy city, turns me a couple of times before I find my way back onto a street I can name. I round a corner and a wall of flowers slaps up against my sight-lines with the crack of waves on the concrete piers. Plastic. There are real flowers that look like this for sale all over town, just as bright, and a bunch of them costs about the same as the fakes. Along the dark trenches of streets, clothes shop mirrors flashing light fly at angles to meet me, tip my tipsy sea legs landwise. Mise-en-abyme, my reflection rises up towards me, will not let me pass. This is not what I came for: a close-up, a reflection of my fragmented self.

Your voice comes more rarely now. Why it is only your insults I remember?

No, I’m the sum of everything that has ever happened to me. You are obsessed by surfaces.

Mirrors—transparent but solid—reflect movement the wrong way round. Every reflection conjures not its imitation, but its opposite. On Skype you were left/right reversed, as in a mirror—no wonder I sometimes got the wrong end of the stick. My webcam showed me reflected, tiny, in the corner of my screen and, at your end, you saw not only me but also your own image.

Was I your mirror? We talked online but IRL I could only stare. When I look I can’t speak (try it: why else are photos silent?). I was content to reflect on what you said while I held you in my gaze, steady as a full bowl of water. If I disturbed the surface with a movement, a noise, it glanced dangerous reflections as though about to spill, so mostly I listened, mute as a swan reflected double, its white battleship twin masking frantic legs. You slid bright screens of words—you said—betwixt us.

Reciprocal love, such as I envisage it, is a system of mirrors which reflects for me, under the thousand angles that the unknown can take for me, the

faithful image of the one I love, always more surprising in her divining of my own desire and more gilded with life.
Breton, Mad Love

I liked the rhythm of our written conversations, the ellipses, phrases left hanging, finished, or left to go hang; each sentence a switchback, every new word, a change of angle. There was a world in your words, or somewhere on the other side of them, because surfaces are something, after all. Words worked online, but when we saw each other face-to-face I reached out and touched only your surface (what else could I have touched?) and it pooled, rippled, destroyed the depths’ reflection. You look into, not onto, a mirror. Heloïse to Abelard (a letter: words not flesh): I never sought anything in you but yourself. Why did you look for anything else in me?

There’s no such thing as tone of voice in instant message. Had you been joking all along? A joke has a mirror’s opacity: a pun’s the double of a word reflected, reversed left to right, not its true image. Its meaning bounces back. A reminder: every phrase mirrors its speaker, each word reflects its author. I catch myself in the mirror sometimes,

certain expressions. Just occasionally I still look exactly like what it looked like you were looking for.

Sitting in my hotel room, a white cube that plays games with space, I’m still wondering whether to press the send on my postcard. No. I detach the photo I took in London, attach another I took from the train window this morning. Instead of the image embedding, sentences spool out across the screen, sentences I can’t read. Oh yes, a jpg isn’t made of pixels after all. Break it up and it’s made of language. Everything comes down to the words. I try again. This time the picture takes, but the moment’s passed. I don’t send. I put it into Drafts. Hide and seek; if I don’t press the button I may never hear from you again.

Is this an ending, then, or just another gap? Consider the rhythm of our communication: its beats and silences. Consider the unwritten rules of the game uncovered as we went along:

• If you write to me, I can answer.
• At any point either of us can choose not to answer the other.
• I cannot choose to write to you first, for fear that you will

But what is this game for and why would anyone want to win it? What’s the prize, if there’s a prize at all, or is the prize just not losing? Too late for me. I lost you. If you never wanted me in the first place, you had nothing to lose but, if you win, you win either nothing, or nothing you any longer desire. Lucky at cards, unlucky in love: the King of Hearts. Having everything to lose, why did I, why do I, play your game?

It is by an extreme capacity for defiance that certain unusual people who have everything to hope and everything to fear from one another will alway recognize one another . . . as regards love, the only question that exists for me is to resume under all the requisite conditions, that nocturnal ride.
Breton, Nadja

Because if I let you have power over me, we have a relationship.

From Break.up. Used with permission of Semiotext(e). Copyright © 2018 by Joanna Walsh.

A Night of Poetry at the New York Botanical Garden 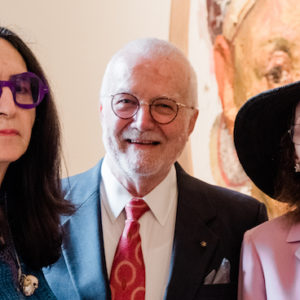