This week on The Maris Review, Patrick Hoffman joins Maris Kreizman to discuss his new book, Clean Hands, out next week from Grove Atlantic.

On how to tell a story with many characters:

Patrick Hoffman: The only thing that I try to do is to keep it moving fast and keep it tense. That’s my goal. That’s what what I’m going for. I don’t know how beyond that what I’m trying to do.

Maris Kreizman: But also, you’re so good at switching points of view among characters. It’s a huge cast of characters that we get to know in this very quick space. I guess the question is, how do you get the right details about each character in there? I had no trouble telling anyone apart, which is one of my biggest problems in reading books.

Patrick Hoffman: I know. I was worried about that, too. For me, I have a struggle reading a book like Wolf Hall. I almost can’t do it because I can’t follow all the characters. So I was definitely worried about that. In terms of getting the characters—you write fiction, too—What do we do? We pull the veil back and look into this other alternative universe and try to say, what are these characters feeling and doing at the time? That is what I try to do.

On writing thrillers as someone who works as a private investigator:

Patrick Hoffman: This is the first book where I’ve had a remotely private investigator-type character. I’m a private investigator, and I have been one for about sixteen years now, but I never wanted to do it because I just found it kind of corny to have a private investigator on the case. No offense to anyone that is doing that. I work on gnarly criminal cases and it’s what I’ve been doing this whole time. I’ve been working on criminal defense stuff and now working on appeals for wrongful convictions. It’s definitely not glamorous, but it’s an exciting world where you could have grand fiction for sure. But I’ve always just wanted to stay away from that and just use little details instead of using actual cases or anything like that.

On having the main character as a woman:

Maris Kreizman: It’s cool that in this book the most badass characters are women.

Patricl Hoffman: This is another confession that I have to make. This book started with its main character as a male, and I showed a very early draft to [my wife] Reyhan and she said it would be much more interesting if that character was female. At first I was like, it can’t be. I see this guy. Then I went back to my office and I was rereading the stuff and trying to look at it. What if she was a woman? Could you just change all this stuff? It is so much more interesting to have her be a female character instead of a male ex-CIA officer, which is cliché. Having someone as a tough fixer, a person that threatens you and stuff. As a woman, it feels more interesting.

Patrick Hoffman is a writer and private investigator based in Brooklyn. His first novel, The White Van, was a finalist for the Crime Writers’ Association Ian Fleming Steel Dagger Award and his books have been named Wall Street Journal, BuzzFeed, and San Francisco Chronicle Best Books of the Year.

The Paying Guest by Sarah Waters 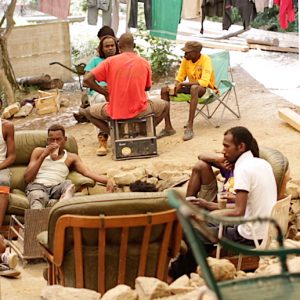 The image above is a photograph taken at the home of Cédric Herrou, a French farmer celebrated for housing and aiding thousands...
© LitHub
Back to top