On the 50th Anniversary of her Death

If you were a certain kind of teenager (bookish, mouthy), you may have memorized literary quotes—quips, perhaps; zingers even—as a kind of social armor-slash-weapons kit in your spare time. If you did, doubtless you taught yourself at least a few phrases once spoken by Dorothy Parker—acerbic critic, witty drinker, sharp-eyed essayist—who died fifty years ago today at the age of 73. Parker is probably best known for her caustic repartee and suggestive rhyming lines (some of the most famous of which are apocryphal, alas), which is fair enough—everyone loves a good one-liner—but she’s also a fine prose stylist, and I highly recommend at least a few hours spent with her Constant Reader column in The New Yorker, in which she reviewed books, more than often negatively, from 1927 to 1933. (Bring back the pan, I always say.) Parker’s columns are like candy: read one—even a review of a book you’ve never heard of, it doesn’t matter—and you’ll be compelled to read the next. Unlike candy, however, these are not bad for you. Neither is anything else she wrote. As for her martini-fueled insults, well, the jury’s out. Either way, on the fiftieth anniversary of Parker’s death, I am writing to encourage you to embrace your inner teen and memorize some of her excellent quippage to use at your earliest convenience. Some suggestions below.

“I hate almost all rich people, but I think I’d be darling at it.” (The Paris Review)

“It’s not the tragedies that kill us, it’s the messes. I can’t stand messes.” (The Paris Review)

For standing in the corner at parties:

“Their pooled emotions wouldn’t fill a teaspoon.” (quoted in Not Much Fun: The Lost Poems of Dorothy Parker)

For missing your deadline, answering emails, calling people back, etc.:

“Too fucking busy and vice versa.” (quoted in The Unimportance of Being Oscar by Oscar Levant)

For being asked for writing advice:

“If you have any young friends who aspire to become writers, the second-greatest favor you can do them is to present them with copies of The Elements of Style. The first-greatest, of course, is to shoot them now, while they’re happy.” (originally published in a review in Esquire, 1959)

For riding the subway in New York City:

“Not just plain terrible. This was fancy terrible; this was terrible with raisins in it.” (quoted in Chimes of Change and Hours by Audrey Borenstein)

For chiding that one friend who makes too many dumb jokes:

“There’s a hell of a distance between wisecracking and wit. Wit has truth in it; wisecracking is simply calisthenics with words.” (The Paris Review)

For talking to people who owe you money:

“To me, the most beautiful word in the English language is cellar-door. Isn’t it wonderful? The ones I like, though, are ‘cheque’ and ‘enclosed.'” (quoted in Not Much Fun: The Lost Poems of Dorothy Parker)

For turning down a proposal:

“By the time you swear you’re his,
Shivering and sighing.
And he vows his passion is,
Infinite, undying.
Lady make note of this—
One of you is lying.” (her poem “Unfortunate Coincidence”)

For overpriced restaurants and/or pretentious people:

“[T]ripe is tripe, even though it be served with every recommended precision of elegance.” (from a review of Elegant Infidelities of Madame Li Pei Fou in The New Yorker)

For when you hate a book everyone else loves, and you know you’re right:

“But on second thinking, I dare to differ more specifically from the booksie-wooksies. . . . For years, you see, I have been crouching in corners hissing small and ladylike anathema of [author’s name here—in this case, it’s Theodore Dreiser]. I dared not yip it out loud, much less offer it up in print. But now, what with a series of events that have made me callous to anything that may later occur, I have become locally known as the What-the-Hell Girl of 1931.” (from a review of Theodore Dreiser’s Dawn in The New Yorker)

“To my own admittedly slanted vision, industry ranks with such sour and spinster virtues as thrift, punctuality, level-headedness, and caution.” (from a review of Sinclair Lewis’s Dodsworth in The New Yorker)

For leaving the party early to get into the bath (also, truncated, for use as a solid insult):

“It has lately been drawn to your correspondent’s attention that, at social gatherings, she is not the human magnet she would be. Indeed, it turns out that as a source of entertainment, conviviality, and good fun, she ranks somewhere between a sprig of parsley and a single ice-skate.” (from a review of Favorite Jokes of Famous People in The New Yorker)

“My life and my arms are now and hereafter consecrated to the services of the Society for the Abolition of Charm. . . . There is entirely too much charm around, and something must be done to stop it.” (from a review of Debonair by G.B. Stern in The New Yorker)

For not leaving New York:

“London is satisfied, Paris is resigned, but New York is always hopeful. Always it believes that something good is about to come off, and it must hurry to meet it. There is excitement ever running its streets. Each day, as you go out, you feel the little nervous quiver that is yours when you sit in the theater just before the curtain rises. Other places may give you a sweet and soothing sense of level; but in New York there is always the feeling of “Something’s going to happen.” It isn’t peace. But, you know, you do get used to peace, and so quickly. And you never get used to New York.” (from “My Hometown,” originally published in McCall’s in 1928)

“All writers are either 29 or Thomas Hardy.” (her response to a question about the age of Ernest Hemingway)

For weddings and funerals:

“You can’t teach an old dogma new tricks.” (probably uttered by Dorothy Parker, if not invented by her)

For every single day, reading the news:

“Civilization is coming to an end, you understand.” (The Paris Review)

“What fresh hell can this be?” (everyone’s favorite Dorothy Parker quote, though often misquoted, here reported in You Might as Well Live: the Life and Times of Dorothy Parker, by John Keats)

Is Richard Brautigan's Most Famous Novel a Minor Masterpiece or Naive Relic? 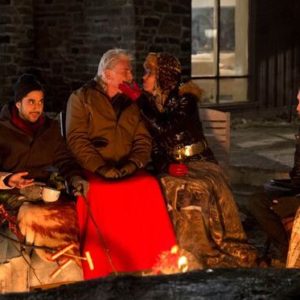 In 2015, a movie I wrote premiered at the Toronto International Film Festival. It was the culmination of a lot of hard work...
© LitHub
Back to top