"Why, looking for new ferns."

I have been re-reading Donna Tartt’s The Secret History every other year for almost two decades. I should say that I don’t make it a point to do this; it’s more that, somehow, I wind up with the book in my hands at regular intervals. And unfortunately (fortunately?) for me, if I pick the book up to read a page or two, or find a favorite line, I always feel compelled to read the whole thing again. Yes, it’s a sickness.

My re-reads usually happen in the winter, but I’ve noticed that I also gravitate to the novel during moments of personal anxiety and uncertainty. So you may not be surprised to hear that I’ve been reading it again recently. This time, I was struck anew by the book’s masterful prologue, which manages to beguile the reader, fire up the plot, and preview Tartt’s artistic concerns all at once. No small feat for the first page and a half of a debut novel.

The Secret History is so frequently referred to as a “why-done-it” (as opposed to a “who-done-it”) that I can’t identify the original source of the phrase (it was probably Tartt’s publicity team, all things considered). It’s easy to understand where this description comes from—after all, our narrator gives the game up right away. In the prologue, our narrator Richard sketches out what has become the defining moment of his life: when he and his friends kill someone named Bunny. Of course, on a first read, we don’t know who Bunny is, or why they’ve killed him. Which is exactly the point: it’s a ploy, a way to get a reader invested, telling them that you killed someone and that you’re going to explain yourself. Not bad, as a literary tool. But this is only what the prologue is doing in the broadest of terms. There’s much more to unpack here.

So let’s start at the beginning:

The snow in the mountains was melting and Bunny had been dead for several weeks before we came to understand the gravity of our situation. He’d been dead for ten days before they found him, you know. It was one of the biggest manhunts in Vermont history—state troopers, the FBI, even an army helicopter; the college closed, the dye factory in Hampden shut down, people coming in from New Hampshire, upstate New York, as far away as Boston.

The first sentence in the book could, in many ways, stand in for the whole thing. It neatly juxtaposes the beauty of the natural world (mountains, melting snow, a sense of spring) with matter-of-fact murder (that stark, clean “Bunny had been dead for several weeks”), and then hints at the real genius of the book: the moral ambiguity of all of the characters—or at least their essential resistance to anything other than their own elaborate, quasi-hypothetical, Greek tragedy-infused narrative of themselves. (Richard later remarks on this more explicitly: “I suppose we’d simply thought about it too much, talked of it too often, until the scheme ceased to be a thing of the imagination and took on a horrible life of its own . . . The idea of murdering Bunny was horrific, impossible; nonetheless we dwelt on it incessantly, convinced ourselves there was no alternative, devised plans which seemed slightly improbable and ridiculous but which actually worked quite well when put to the test.”) I mean, several weeks? They kill him; ten days later, the body is found; still it’s only weeks later, when they appreciate the magnitude of the response—an army helicopter!—that they come to “understand the gravity” of the situation. These are, after all, children playing at murder and myth, trying to touch the other side.

Right away, too, Tartt sets up the tone and storytelling style of the novel. The first sentence is formal, even a little stiff in its beauty—“the gravity of our situation”—while the second slides into this conspiratorial, storytelling mode of Richard as Everyman, even after so much time spent imitating his patrician friends. “He’d been dead for ten days before they found him, you know.” Both the lean in and the lowered voice are implied.

But then, as if feeling how close he’s getting to the story he both wants to tell and to avoid, Richard circles away, reeling back from the reader, filling the space between himself and Bunny’s death with state troopers and helicopters and a list of all the states around Vermont.

Oddly, the next two paragraphs begin with the same phrase: “It is difficult to believe.” Here’s the first, which kicks off a chilling paragraph about how they weren’t even trying to hide the body, and that there would have been no story “had it not been for the snow that fell that night” and muddled up the narrative of a hiking accident:

It is difficult to believe that Henry’s modest plan could have worked so well despite these unforeseen events.

And here’s the second:

It is difficult to believe that such an uproar took place over an act for which I was partially responsible, even more difficult to believe I could have walked through it—the cameras, the uniforms, the black crowds sprinkled over Mount Cataract like ants in a sugar bowl—without incurring a blink of suspicion.

This is interesting, the kind of repetition that an editor might try to get you to vary before your final draft. (Circumstantial evidence would suggest that Tartt is resistant to editors, which I would consider in her case to be another mark of her genius, but I cannot prove this.) The second paragraph also comes after a hard stop, a horizontal line indicating a break in the narrative, which feels unusual in a prologue, especially one this short, but this underscores the functionality of these two mirrored paragraphs, both beginnings of a kind. The first focuses on what happened, what they did; the second is about Richard being the one (or one of the ones) to do it. Again, this is a reflection of the themes of the book writ large: Richard is almost equally baffled by the fact that any of this happened at all and that he was included in it, when he was so different from these alluring, amoral rich kids, bound to them only by their mutual obsession with beauty.

I wonder whether there was ever a draft in which the second “It is difficult to believe” was the first sentence in the book. It feels like it could be, but it’s the more subtle of the two, the less fantastic. If so, the choice to demote it was a good one, structurally, but for me, it gets closer to reflecting the most intriguing thread of the novel: Richard’s self-knowledge, or lack thereof.

After these paragraphs, we have turned the page, and we quickly see that we are coming to the end of the prologue, which is fine, because now we’ve come to the real crux of it: next, Richard recounts the moment just before Bunny’s death. Here it is as it appears in the prologue:

What are you doing up here? said Bunny, surprised, when he found the four of us waiting for him.

The actual murder is completely elided here, given no space at all: the next sentence and paragraph begins “And after we stood whispering in the underbrush. . . ” Richard simply moves on; after all he’s only trying to get you invested in his narrative. He’s not going to give you everything yet.

But here is the same moment as it appears 265 pages later, at the book’s midpoint:

“Tell me,” Bunny said, and I thought I detected for the first time a note of suspicion. “Just what the Sam Hill are you guys doing out here anyway?”

The woods were silent, not a sound.

Henry smiled. “Why, looking for new ferns,” he said, and took a step towards him.

This is followed by more blank space than anywhere else in the novel; it’s the end of Book I. In my copy that means a full six pages of space in which to imagine Bunny’s murder—the push, the fall—before Richard reappears at the beginning of chapter six to cringe and say “Just for the record, I do not consider myself an evil person (though how like a killer that makes me sound!).” And then he hems and haws and doesn’t really describe it at all. “I am sorry, as well, to present such a sketchy and disappointing exegesis of what is in fact the central part of my story,” he tells us, and goes on to justify himself by explaining how he’s just like all the other murderers who keep the details of their crimes close to the vest. He claims a sense of unreality, but it’s a deft move by Tartt: she manages to keep the suspense—about a murder we’ve known from the first page would happen, no less—alive by continuing to shroud it from us. How much different would this scene feel with even the slightest description of Henry pushing Bunny?

But back to the repeated moment just before the push, which I find particularly fascinating. The prologue version has no dialogue markers, a move which often gives an exchange a kind of inexactness—the sense is of summarization or general recounting as opposed to an exact reporting of who said what. This makes perfect sense; Tartt sets up the prologue to introduce Richard’s story as one being written years after the events of the book’s present action. So by the time Richard is writing the prologue, this exchange, the moment before the act he couldn’t come back from, has become a kind of personal legend. Of course the two recountings aren’t exactly the same. Except when it comes to Henry.

Maybe this is just because Henry’s line here is so ineffably incredible. I mean, it’s essentially Henry’s entire character in one sentence: erudite, false, menacing, but also somehow innocent (faux-innocent?), hopeful, secret-seeking, nature-seeking. It’s such a sweet and weird and terrifying thing to say before you murder someone. “Why, looking for new ferns.” That “why,” those ferns!

But it’s also because this is a novel about one person being fully transfixed by another, about Richard’s shame and pleasure at being led up to the edge of the cliff and off of it. If the moment just before Bunny’s death has become legend for Richard, Henry himself has become myth. In my reading, it’s Henry, not the murder of a friend, that Richard can’t quite shake.

I suppose at one time in my life I might have had any number of stories, but now there is no other. This is the only story I will ever be able to tell.

Of course, as we already know, he is barely capable of telling it. He circles and circles and tries not to look. Which, of course, makes us the rest of us look all the harder. 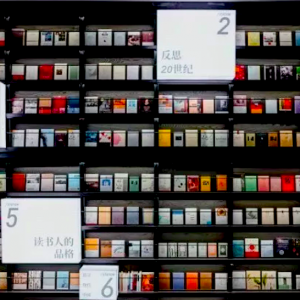 Books can be prophetic, even when their creators didn’t aim for them to be. In Ling Ma’s debut novel, Severance, a virus...
© LitHub
Back to top