What’s the first image that pops into your head when you think of Edgar Allan Poe? Is it this ubiquitous one? Maybe it’s that snapshot of your old roommate from Halloween 2011, when she tied a fake bird to her arm and knocked everyone’s champagne glasses over with it. (Just me?) Or is it an image of Poe in one of his many pop culture incarnations? You wouldn’t be alone.

After all, Poe pops up frequently in contemporary culture—somewhat more frequently than you might expect for someone who, during his lifetime, was mostly known as a caustic literary critic, even if he did turn out to be massively influential. I mean, it’s not like you see a ton of Miltons or Eliots running around. So today, on the 210th anniversary of Poe’s birth, I have compiled a brief and wildly incomplete selection of these appearances. Note that I’ve eliminated adaptations of Poe’s works, and focused on cameos and what we’ll call “faux Poes.” Turns out it isn’t just my old roommate—lots of people really love to dress up as Edgar Allan Poe. 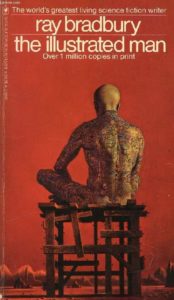 1949: Ray Bradbury, “The Exiles,” published in The Illustrated Man

As you probably know, Poe’s work has been massively influential on American literature. In a 1909 speech at the Author’s Club in London, Arthur Conan Doyle observed that “his tales were one of the great landmarks and starting points in the literature of the last century . . . each is a root from which a whole literature has developed. . . Where was the detective story until Poe breathed the breath of life into it?” But it’s not just his work—Poe as a figure has infiltrated a number of literary works, including this early Bradbury story, in which Poe (along with Algernon Blackwood, Ambrose Bierce, Charles Dickens, and William Shakespeare) is living on Mars, and slowly withering away as humans on Earth burn his books. The symbolism isn’t exactly subtle, but hey. 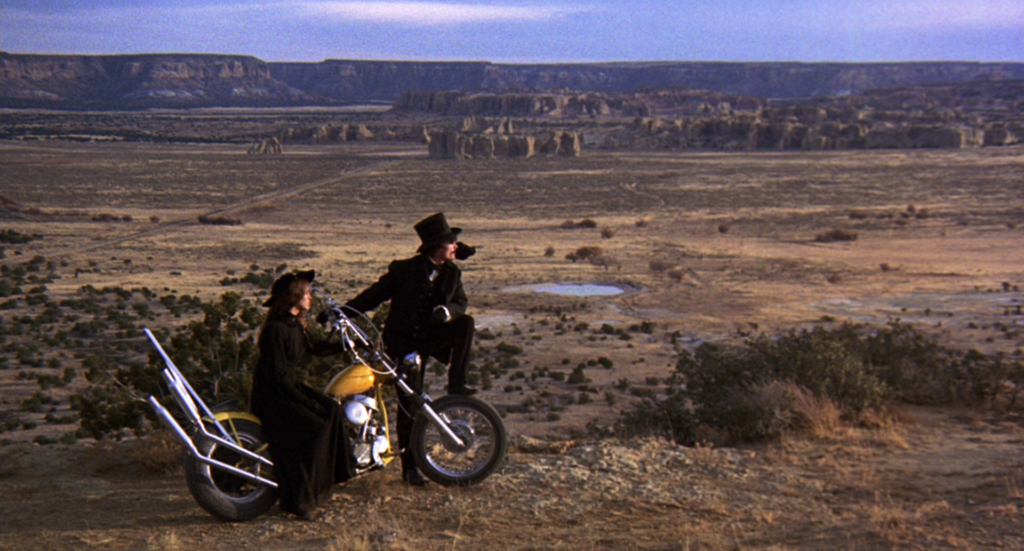 Prolific producer and director Roger Corman is famous for his cult classic “Poe Cycle,” eight films based on Poe’s works (well, technically seven—one is a Lovecraft story with one of Poe’s titles on it) produced between 1960 (House of Usher) and 1965 (The Tomb of Ligeia), and almost all starring Vincent Price. So it’s not entirely surprising that his 1970 black comedy Gas-s-s features a Poe who rides around the post-apocalypse on a dirt bike, raven on hand and Lenore in tow, commenting on the action. After all that, Corman was pretty burned out and disillusioned, and this film was the result. 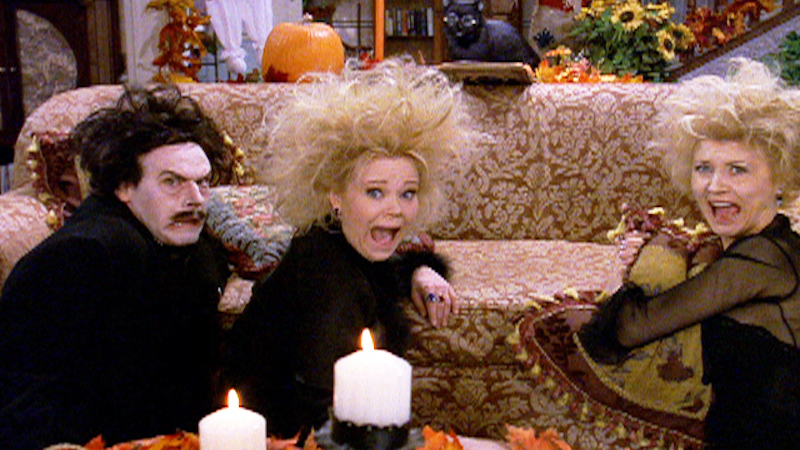 You can’t have a show about witches without, at some point, involving Poe. In this, the 1999 Halloween episode of Sabrina the Teenage Witch, Sabrina decides she’s too mature for the spookiest holiday (she winds up partying to the Backstreet Boys with some zombies), and the Aunts, desperate for a fright, use their time travel clock (I know what you’re thinking: it’s totally time to rewatch this show) to invite the scariest storyteller of all time over for dinner. Unfortunately, he’s over horror. “There’s a much bigger market in inspirational writing,” he tells them. Disappointments abound. 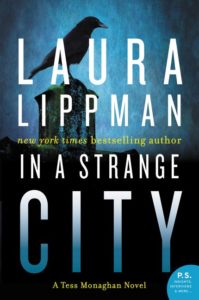 Well, it’s not exactly a Poe cameo, but I can’t write a list like this without at least a mention of the Poe Toaster, the famous and mysterious figure who, every January 19th, would visit Poe’s grave in Baltimore, toast him with cognac, and leave him three roses. The Poe Toaster isn’t Poe himself, but he’s still a Poe-centric cultural icon… and there’s the argument that Poe himself is there too, somewhere underground. So here’s a compromise: Lippman’s In a Strange City, in which two rival Toasters appear—and one shoots the other. Thus begins a thoroughly Poe-soaked mystery. 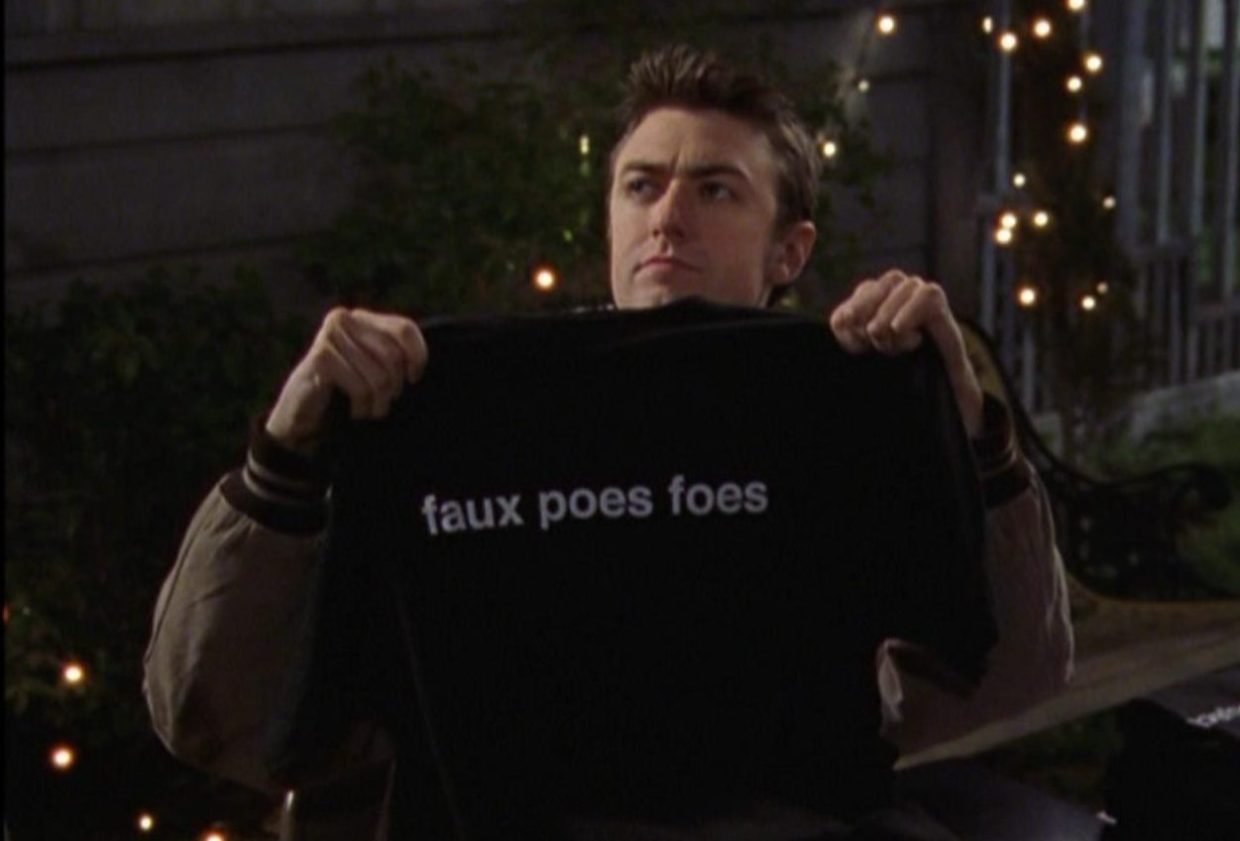 This is what you came here looking for: the episode in which a) the Edgar Allan Poe Society (or as Michel calls it, “the I-should-be-sterilized-so-that-my-disturbing-idiosyncrasies-aren’t-passed-onto-the-next-generation society”) comes to town (they’ve all prepared “The Raven” as their performance piece), b) Kirk is making novelty shirts, c) Rory picks a college, and d) the inn burns down, because that totally fits in. In the end, we’re left with a conundrum: If the Poes start fighting, does that punch a hole in the space/time continuum? 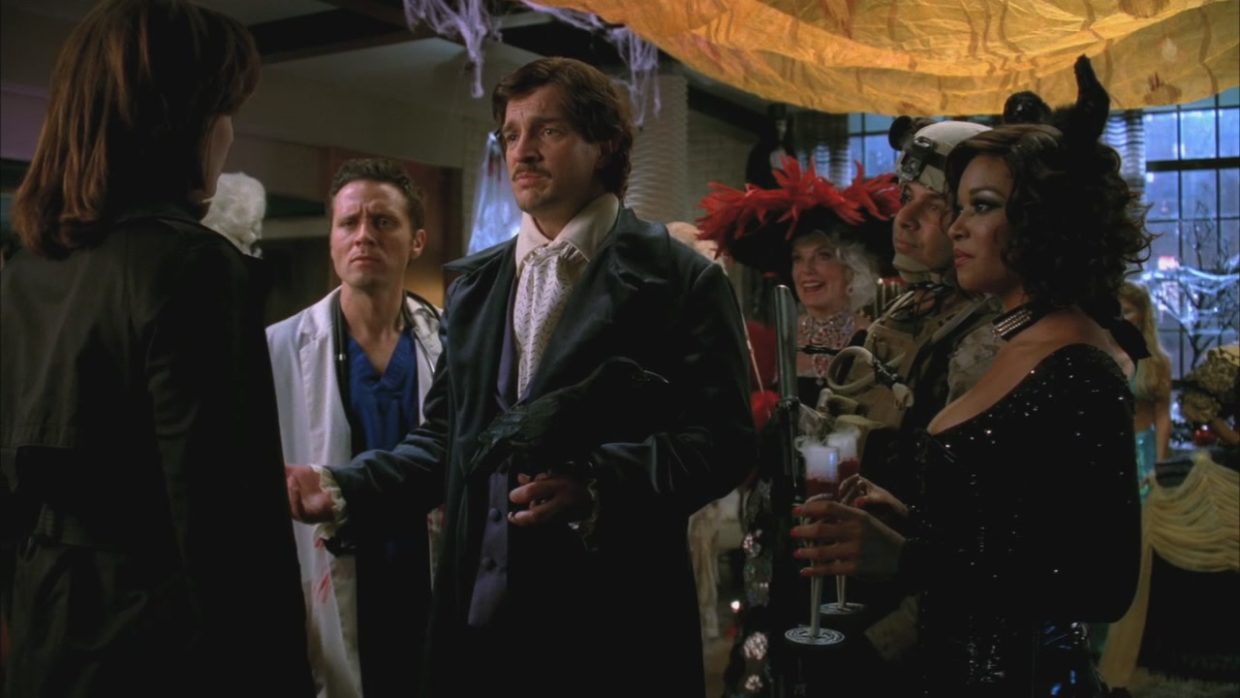 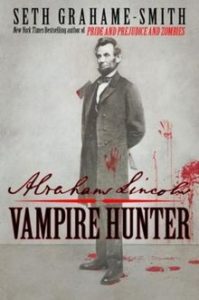 I guess it’s not that shocking to imagine that if Abraham Lincoln knew about vampires, Edgar Allen Poe would know about them too. As the story goes:

As a first-year student at the University of Virginia, Poe drank and gambled away every penny his foster father sent him, until John Allan finally cut him off. Enraged and abandoned, he fled Virginia for Boston and enlisted in the army under the name Edgar A. Perry, loading artillery shells by day, and writing ever-darker stories and poems by candlelight. It was here, while stationed in the city of his birth, that Edgar Allan Poe met his first vampire.

It’s because a vampire reads his poetry and decides only another vampire could have written it, and so he looks Poe up, and finds out he’s a mortal, and then they become friends anyway! Great. 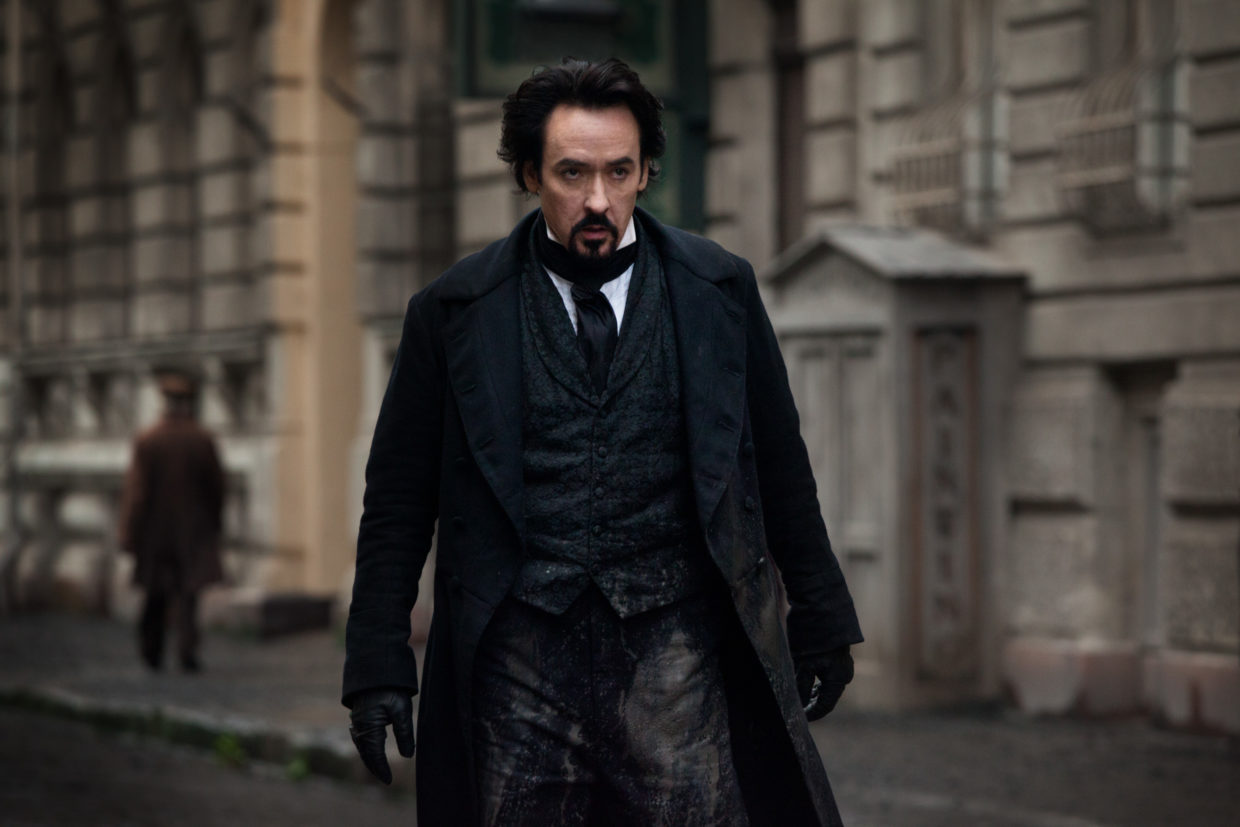 Part of Poe’s enduring legend has to do with the mysterious circumstances of his death. As I previously explained it on this very website:

On October 3, 1849, Poe was found wandering the streets of Baltimore, delirious, rambling and wearing someone else’s clothes—to be precise, as described by his attending physician John Moran: “a stained, faded, old bombazine coat, pantaloons of a similar character, a pair of worn-out shoes run down at the heels, and an old straw hat.” He was taken to the hospital, where he slipped in and out of consciousness, never becoming coherent enough to tell his tale, before he died on October 7.

Theories abound as to what happened in Poe’s final days (the “cooping” theory being chief among them), but this John Cusack movie suggests it was all to do with a serial killer who was targeting Poe by reenacting some of his stories. Which is also . . . a theory. 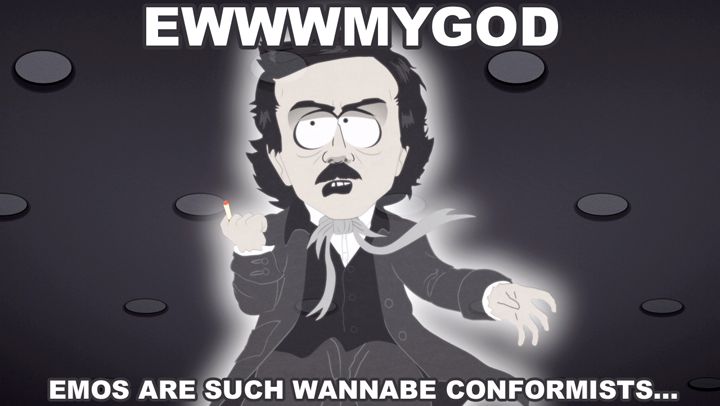 In which the Goth Kids and the Vamp Kids (because “all genres of Gothic subcultures are derivatives of Poe’s work”) summon the ghost of Edgar Allan Poe during a seance in the library, but don’t exactly get what they want. “Children of Darkness, I would help you, but I fear I cannot be seen with a bunch of douchey Vamp kids and their poser-ass plastic fangs.” It’s not a great episode, but I did laugh out loud at the fact that Edgar hates his name and really prefers to be called “NightPain.”

Look, I’m admittedly a huge dork and I love (most of) the ERB series, particularly when they get literary. Burns are achieved on both sides but I have to say I think King comes out on top.

I started watching this show because I saw a review entitled “The Best Character in Altered Carbon is a Hotel,” and then I found out that the hotel was Edgar Allan Poe. I mean: sold. Well, technically the hotel is called The Raven, and its proprietor is Poe, but since it’s all AI, what’s really the difference? Anyway, I agree: Poe—who spends the first episode protecting his brand new guest by shooting up a swarm of bad guys, as you do—is reason enough to watch this show.

How Do You Save an Endangered Species in a Warzone? 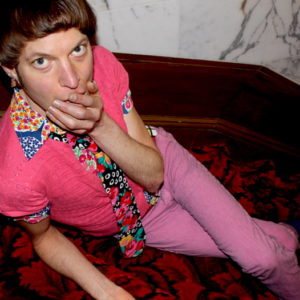 Mattilda Bernstein Sycamore is the guest on this episode of Otherppl. Her new novel Sketchtasy is available from Arsenal...
© LitHub
Back to top
Loading Comments...