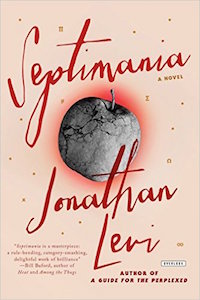 The following is from Jonathan Levi’s novel, Septimania. Jonathan Levi is the author of the 1992 novel A Guide for the Perplexed, as well as many plays and opera libretti that have been performed internationally. A founding editor of Granta magazine, Levi has written political and cultural journalism for The New York Times, The Nation, Conde Nast Traveler, and many other publications.

It was a book, a book bound in leather that had cracked and faded into a light black, of a size and shape that felt immediately of another age and place. It was a notebook, Malory saw, not more than a few inches to each side, perhaps fifty pages deep, with a musty smell, distinct from the damp of the organ loft. Embossed on the front cover of the notebook in a faded gold no bigger than a thumbprint, there was a seal. It was a capital S within a seven-sided border. There was something ancient about the sign, older than the notebook itself, smacking of troubadours and damsels: the S fenced in the heptagon like a unicorn that had escaped from some medieval tapestry.

Malory opened the notebook. It was filled with an ink whose antiquity nearly melded with a paper that had browned with the centuries. At first blush, the writing seemed to be Italian in a hand too ornate for Malory to read. Every page or so was headed by a date, although the dates were scribbled in a way that made it difficult to tell numbers from letters, sixes from b’s or g’s. A diary, a journal of sorts.

Malory turned the pages slowly, and then he began to turn faster. One word stood out from the others within the ornate scrawl. It was a word sometimes alone on a page, sometimes repeated. A word that was a name, a name that occasionally didn’t appear for many entries. But it was a name that he knew well enough that no manner of scribbled hand could disguise it.

“Isaac!” Malory whispered. One of the parishioners looked up from a back pew, but the vicar went on rumbling.

Malory continued turning the pages. He looked at the dates at the tops of the entry pages, at the numbers of the dates again. Yes, it was possible, it was very possible that the numbers began with a “1” and then a “6,” and, if so, that the diary or journal—since that is what the notebook most nearly appeared to be—was written in the 1600s. That the Isaac was his Isaac, his Newton.

“Un giardino, un albero.” Malory read the first words of the first entry with some effort, and then further down the page, “Isaac.” But Newton was no gardener, Malory thought, flipping randomly through the rest of the Chapbook. What garden? Whose tree?

And then he saw it.

The last page. The final page of the diary was written in a different handwriting from the rest of the journal, a hand he recognized in a language he understood. It was the hand of the Old Isaac Newton, the Old Man, long after the youthful discoveries of 1666, his annus mirabilis, long after the triumphs and the celebrations, the paranoias and the lawsuits against Leibniz and Boyle, long after his term in Parliament and his stint at the Mint, his leadership of the Royal Society, his descent into alchemy and the Book of Revelations and his calculations of the End of Time. There was no disputing the identity of Isaac now. This last page was written in English by Isaac Newton in his hand, the hand of a man close to death.

This was a diary, a journal written in Italian by a friend of Newton’s, so it seemed. A friend who had known Newton all his life, perhaps until the end. And on the final page of the journal, a sentence written in Newton’s own hand—and no one knew Newton’s handwriting better than the Newton Scholar (ex-Newton Scholar, Malory thought with a pang) of Trinity College, Cambridge.

Malory read again. And again. Newton had found a single rule? Had refined his Laws of Thermodynamics and Optics and Calculus and Gravity into a single rule?

“I have found the One True Rule.” Malory read, “But the Rule is too weighty to fit on one page of this Chapbook.”

Malory looked at the top of the page. There was no date written in Newton’s hand. The last entry in Italian was dated sometime in 1692. Malory knew 1692. He knew it was the year before the fifty-year-old Newton suffered what was clearly a nervous breakdown. Malory had read the correspondence left by the Master and Head Porter of Trinity from that year. He knew that Newton was incapable of writing in 1693. This was not the handwriting of the Newton of 1693. This was the shaky penmanship of a much older man, perhaps of the Newton on his deathbed in 1727. And the rule? If, before he died, Newton had actually found the One True Rule that guides the universe, then he had found something even Einstein couldn’t find, the Holy Grail of modern mathematics and physics, the Unified Field Theory. It would be the single point from which all science follows, the single cause for all that came after Creation. It would be God. Not the three-part God of the Trinity that Newton despised, but the One God in whom Newton believed the way Malory believed.

Malory wasn’t entirely certain what he believed. But he saw himself laying the Chapbook down on the desk of Aubrey Potts—he must ask Antonella to translate the Italian straight away—and not only winning a Ph.D., but also finding Louiza as part of the equation. Malory rubbed the Chapbook like an oil lamp and pondered the research ahead, the papers he would publish, the books, the Nobel Prize in Physics. The scientists of the twentieth century had turned their backs on Newton as they searched for a Unified Field Theory. Now Malory would show them that his Newton had beaten them to the punch. Newton knew something, Malory was sure of it, that would turn gravity on its head, that would bounce the apple back up from the ground to its nostalgic stem. Simplex sigillum veri—the simple is the sign of the truth. No more High Tables. No more colloquia. One work. One girl. Find the One True Rule and he would find the One True Girl.

From SEPTIMANIA. Used with permission of The Overlook Press. Copyright © 2016 by Jonathan Levi. 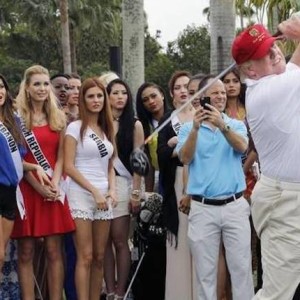 Beware the Ides of March: Trump Ascending? During the week preceding the crucial primaries scheduled for today, Tuesday, March 15th, the Democrats held two debates,...
© LitHub
Back to top