Writers Recommend Necessary Reading for Inauguration Day and Beyond

In the last weeks as I’ve found myself rereading George Orwell’s classic dystopian novel 1984, a work I never took to in high school yet felt even then, all the same, that the context of how the work was being taught had eluded the experiment of my sophomore English class. Orwell’s gray fantasia had been reduced to a Cold War allegory (if even that) about the joys and necessities of unlimited self-expression. In short, what happened in the world before or outside America in the late 1990s. This time round, more than 15 years later, after three presidents and two imperialist wars and so very much else, Orwell’s text strikes me less as science fiction or totalitarian parable. It describes a world I know, today, intimately. It renders the temperature of our corporatized media and the destabilizing rhetoric of the incoming administration under President-elect Trump.

On page 101, Winston wanders into a shop in the prole district forbidden to all Party members such as himself, in part to revisit the scene of his great crime some 50 pages earlier where he purchased a blank diary with the intent of recording language freed from the trappings of ubiquitous Newspeak. Orwell writes:

There was a small bookcase in the other corner, and Winston had already gravitated towards it. It contained nothing but rubbish. The hunting-down and destruction of books had been done with the same thoroughness in the prole quarters as everywhere else. It was very unlikely that there existed anywhere in Oceania a copy of a book printed before 1960.

This ever-eerie image of the destruction of knowledge compresses and resonances with so much of imperialist, colonialist, genocidal and fascist history: The book burning by the Nazis in May 1933 and then even further back to the criminalization of literacy for African slaves and indigenous peoples in colonial America. As Paula Gunn Allen reminds us: “The root of oppression is the loss of memory.”

Today’s inauguration signals the emboldened resurgence of fascism and white supremacy under the banner of global populism. I am chilled by yesterday’s news of how the Trump administration plans to completely gut and cut the National Endowment for the Arts as well as the National Endowment for the Humanities. In response, I asked a few dozens writers over text and email to respond to the following question.

“What book is necessary reading in the face of today’s inauguration?”

I am thankful for their generosity and fortitude, hopeful for the renewed commitment to staying informed as well as informing others. Perhaps such a task is the principle service upon which all of teaching, literature, the arts—not to mention our democracy and civil rights—relies. May we take root in these voices and texts, may we honor their differences, end the persistence of the distinct oppressions they point to and are drawn from, be ever vigilant to preserve the rites of their memories.

The New Jim Crow: Mass Incarceration in the Age of Colorblindness by Michelle Alexander · Borderlands/La Frontera: The New Mestiza by Gloria Anzaldua · Confessions by St. Augustine

The Fire Next Time by James Baldwin · Meditations by Sister Wendy Beckett · The Image: A Guide to Pseudo-Events in America by Daniel Boorstin

The Performance of Being Human by Daniel Borzutsky · Pillar of Fire: America and the King Years by Taylor Branch · Utopia Minus by Susan Briante

Heart of the Breath by Jim Brodey · Crowds and Power by Elias Canetti · Collected Poems by C.P. Cavafy

Start Where You Are by Pema Chodron · The Laugh of the Medusa by Hélène Cixous · Liberation Imagination and the Black Panther Party: A New Look At the Panthers and Their Legacy edited by Kathleen Cleaver and George N. Katsiaficas

Humanimal: A Project for Future Children by Bhanu Kapil · Mess and Mess and by Douglas Kearney · Extraordinary Popular Delusions and the Madness of Crowds by Charles Mackay

The Unconquerable World: Power, Nonviolence and the Will of the People by Jonathan Schell · Look by Solmaz Sharif · A Door Into Ocean by Joan Sloczewski

Stamped From the Beginning: The Definitive History of Racist Ideas in America by Ibram X · A People’s History of the United States by Howard Zinn · Utopia by Bernadette Mayer

The New Testament by Jericho Brown · The Third Reich of Dreams by Charlotte Beradt · I, Too, Dislike It by Mia You

Beastgirl & Other Origin Myths by Elizabeth Acevedo · The Undercommons by Stefano Harney and Fred Moten · Are Prisons Obsolete? by Angela Davis

Adam Fitzgerald is the author of The Late Parade (2013) and George Washington (2016), both published by W. W. Norton’s historic Liveright imprint. A contributing editor for Literary Hub and founding organizer of The Home School, Fitzgerald is an editor, teacher and essayist obsessed with the intersections of identity and formal innovation in the lyric and elsewhere. He teaches at Rutgers University and New York University and lives in Alphabet City. Find out more at adamfitzgerald.com 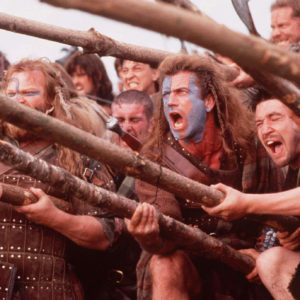 There's a reason Republicans never have poets at their inaugurations. This week, The Scotsman drew all of our attentions...
© LitHub
Back to top
Loading Comments...