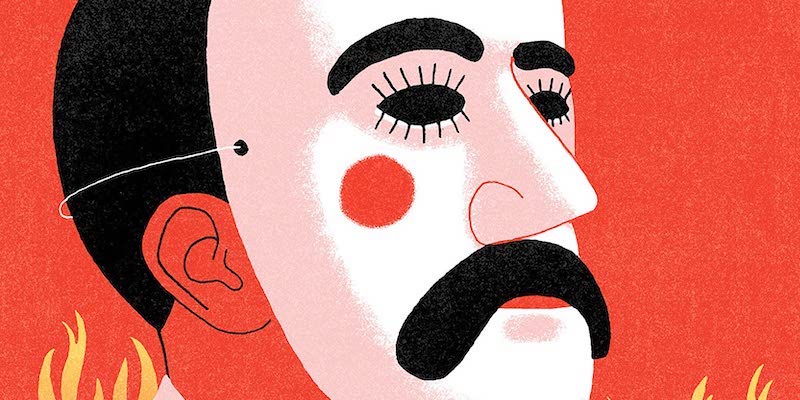 "Reading this book reminded me of watching a cat lick a dog’s eye goo." 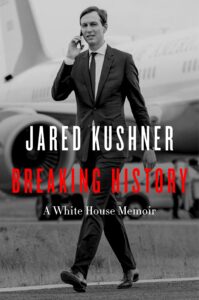 “He betrays little cognizance that he was in demand because, as a landslide of other reporting has demonstrated, he was in over his head, unable to curb his avarice, a cocky young real estate heir who happened to unwrap a lot of Big Macs beside his father-in-law, the erratic and misinformed and similarly mercenary leader of the free world. Jared was a soft touch … Breaking History is an earnest and soulless—Kushner looks like a mannequin, and he writes like one—and peculiarly selective appraisal of Donald J. Trump’s term in office. Kushner almost entirely ignores the chaos, the alienation of allies, the breaking of laws and norms, the flirtations with dictators, the comprehensive loss of America’s moral leadership, and so on, ad infinitum, to speak about his boyish tinkering (the ‘mechanic’) with issues he was interested in. This book is like a tour of a once majestic 18th-century wooden house, now burned to its foundations, that focuses solely on, and rejoices in, what’s left amid the ashes: the two singed bathtubs, the gravel driveway and the mailbox. Kushner’s fealty to Trump remains absolute. Reading this book reminded me of watching a cat lick a dog’s eye goo.” 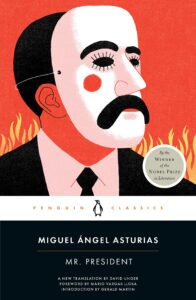 “The life of a writer is buoyed, fraught, consumed, or scarred by the drama of recognition. Most writers never achieve it. Some are ahead of their time and miss it. Others will not see their work published before they die. And some simply suffer from bad timing. The Guatemalan novelist Miguel Ángel Asturias was among the latter. He invented an entirely new literary language, feeding on European avant-garde movements of the nineteen-twenties, that combined political reality, myth, poetry, theatre, silent cinema, indigenous cultures, and dreams. It’s not as if he didn’t get rosettes: he was the first Latin American novelist to win the Nobel Prize in Literature, and one of only three writers to be awarded both a Nobel and the Lenin Peace Prize. But, ‘from the very moment’ he received the Nobel, his ‘star began to wane, and he has never again been at the center of Latin American literary attention’ … Still, a formidable new English translation of his crucial work, the dictator novel El Señor Presidente—Mr. President in this edition—by the Guatemalan American writer David Unger, published in July by Penguin Classics, with an introduction by Martin, may return him to the status that is his due. This time, the story speaks not only to Latin America’s cycles of tyranny but to a United States and a Europe confronting, for the first time since it was published, in 1946, a new wave of authoritarian leaders on the rise.”

“Barnes’s new novel Elizabeth Finch—though novel seems a curious category for what is essentially a thoughtful essay lightly draped in novelistic garments—raises perennial questions by reflecting on the life and legacy of Julian the Apostate … A certain Mozartian lightness has been replaced by stolid earnestness. The novel’s title seems in part a nod to J. M. Coetzee’s Elizabeth Costello, a similarly essayistic novel, and while less dry than the work of Coetzee (whose great gifts do not include a sense of humor), the book is less engaging than, well, much of Julian Barnes … Ultimately, this is perhaps an exploration of the very notion of legacy, of what lives on after a person’s death, of the slippery and mutable details that might shape their memory … It is certainly wise. One might wish only that Barnes had chosen a rather livelier and more compelling protagonist than stolid Neil alongside whom to journey toward this illuminating truth.”

“Andrew Holleran’s novels are so gloomily personal that you can’t help worrying about him in the long gaps between them and wondering, since he’s now nearly eighty, if there will be another book at all. Sixteen years have passed since the last one, Grief, a novella-length study of a man, very like himself, mourning the mother who has been for years the center of his emotional life…How would Holleran, a master of melancholy atmospheres and painful self-scrutiny, follow that study in desolation? Was there a tiny chance he might embrace the freedoms of old age and launch out into some quite new area of interest? Or would he pursue to an even narrower and grimmer focus his study of the deprivations and terrors of advancing years, which made both The Beauty of Men (1996) and Grief such bleak and original testaments? The answer is clear from the opening pages of his fifth novel, The Kingdom of Sand, with their scrupulous evocation of a roadside Florida video store, and of the protocols and humiliations of visiting it if you are a lonely gay man in his seventies in search of sex: this will be Holleran’s most depressing novel yet. It also turns out to be his most touchingly confessional, with a muted poetry of place and season that lingers in the reader’s mind.”

“… very few readers have been praying for a novel like this. But Haven creates an eerie, meditative atmosphere that should resonate with anyone willing to think deeply about the blessings and costs of devoting one’s life to a transcendent cause … The drama of this novel accumulates slowly, like the fresh water in their cistern. The challenges—what to eat, where to sleep—are exacerbated by Artt’s fanatical insistence that they immediately build a stone church and begin copying Bibles. The result is a story of survival trapped in a very small space, completely cut off from the world: Roomwith a view … Donoghue works subtly in the margins, letting these three men evolve into their distinct roles. Their foolish destruction of the island’s resources will resonate with contemporary readers, but she refuses to reduce these characters to symbols of modern exigencies. Her narration stays close to their minds, which are about as free of sin as this story is of irony … The effect is transporting, sometimes unsettling and eventually shocking. Trian’s affection for his companions, the birds, the island—everything—is so sweet and vulnerable that tragedy starts to haunt these pages like the coming winter … My only substantial criticism of Haven sounds more harsh than I mean it to: This novel could have been a classic short story. Donoghue’s prose is too attentive to the craggy beauty of the island and the flutterings of Trian’s heart to suggest the book is padded. But the story’s tight focus; its single, steadily rising arc; and especially its walloping conclusion would have ensured a short-story version Haventhe kind of immortality that Artt can only dream about.”

Beyond the Anthropocentric: When Plants Become Literary Characters 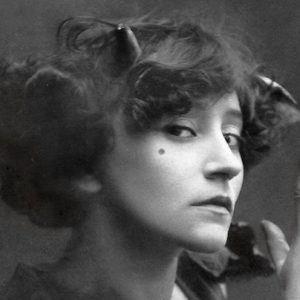 Welcome back to another installment of our favorite bibliophilic game, You Want Me to Read WHAT? The rules are simple: Julie...
© LitHub
Back to top
Loading Comments...