Beyond the Anthropocentric: When Plants Become Literary Characters

Patience, tying together the world of plants and the psychic existence of a human, demands the impossible: to accompany a rhythm of being that is radically foreign to me, slowing down to the pace of florescence and dehiscence, of germination and growth. Now, this impossibility is indispensable for life, which vibrates with its nonhuman echoes outside and within me.

Marder invites us to find ways within our lives (and literature) to get outside anthropocentric thought by observing (and being with) the more-than-human beings around us—whether grass, trees, cars, stones, dogs, parrots, oil, etc.

At a time when other life forms are rapidly disappearing as a result of climate change and capitalist extraction, we must stretch our imagination beyond anthropocentric narratives, in an attempt to find new polyvocal paradigms for sustainable coexistence. The following reading list includes novels in which plants transcend metaphorical use, becoming active characters, conditions, or modes of nonlinguistic communication. Plants in these books connect language with the earth, posing spiritual and existential questions about sisterhood, legacy, diasporic traditions, time, grief, and exile. 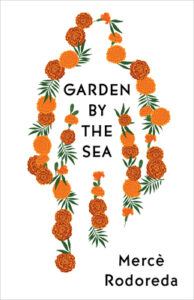 Told from the perspective of an unnamed gardener and widower who has been tending the grounds of an estate on the Catalonian coast for decades, Garden by the Sea tracks the seemingly pastoral activities of the latest landowners (and newlyweds) the Senyorets over six summers. The gardener consistently filters his experience through floral metaphors, describing the successes and failures of his gardening efforts alongside the comings and goings of his employers.

Special tension occurs when the two overlap, for instance when the Senyoreta asks him to dig up a thriving portion of the garden for a party, or how a subsequent party lays another part of his garden to waste. The “masters’” worry-free life is always placed in relation to the narrator’s social status and function on the grounds as he begrudgingly follows the consequences of his employer’s carefree antics, particularly when a neighbor builds a larger house and sets off a competition of abundance. The garden remains remarkably close throughout. “Despite the bad weather,” the gardener says towards the end of the book, “my summer roses were the loveliest they had ever been. Then a heavy rain left them half dead.” 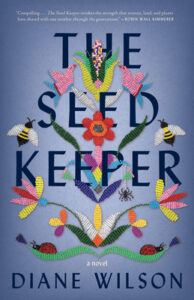 Singing seeds begin this book: “We remember when all of the world had its own song. / To know the song was to speak to all beings in their own language.” In the subsequent first chapter, we learn to wet a seed in our mouths before planting: “That wakes it, you see, tells the seed that the sleeping time is done. It’s the spit that brings us together.” These seeds give Rosalie Iron Wing access to the heritage she lost when she was taken from her home following the deaths of her parents as a child. Years have passed since and the book begins after the death of her husband, a white prairie farmer whose death brings Rosalie back to her own family roots. Wilson’s debut novel spans multiple generations of Dakhóta women negotiating their native heritage and the U.S. government’s destructive attempts to obliterate Indigenous life. Seeds and their cultivation play an essential role in shaping the way characters engage with their history, linking their experiences through the generational transference, preservation, and cultivation of knowledge. 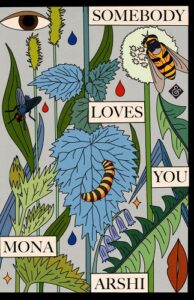 Somebody Loves You, Mona Arshi

The communal garden is an essential space in Mona Arshi’s debut novel, connecting the backyards of five different families. Eleven-year-old Ruby has made a quiet but dogged vow of silence. She watches the garden consistently expose and amplify private habits and—often racist—opinions of her neighbors. “No one could quite remember why there were no fences separating the gardens,” Ruby says, noting that only one neighbor took care. “Only the Parkers looked after theirs properly—they grew azaleas, and planted bulbs at the right time in the year so they flourished in the springtime, and also maintained a compost heap.”

Ruby’s Christian background adds a biblical framework to the garden, as does her British-Indian heritage. These suggest the garden space as an idyllic realm of possibility, one in which anyone can grow their own food or flowers, sharing a communal sense of ownership. Given the complexity of this supposedly private, domestic space, it’s no wonder that the garden catalyzes Ruby’s mother’s breakdown—becoming a stage for her failure to procure a better life for her children. The garden is a conduit between lives, exacerbating social and racial hierarchies that Ruby and her sister must navigate. It enables fresh familial trauma and inadvertently challenges Ruby’s position, asking what it means to express and endure violence. 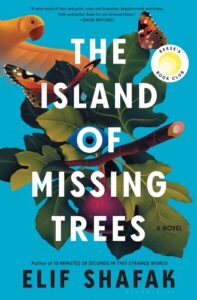 The Island of the Missing Trees, Elif Shafak

Perhaps as a counterpoint to Ruby’s silence, this book opens when sixteen-year-old Ada, whose mother has recently passed, screams in her classroom, breaking through a discussion of family heirlooms after revealing her father’s love for a fig tree.  Ada’s episode of disruption is split by a separate chapter, narrated by the aforementioned fig tree describing its burial by Ada’s father. He means to keep it warm through the cold UK winter. “A tree is a memory keeper,” the tree says later, during one of its many interludes. “Tangled beneath our roots, hidden inside our trunks, are the sinews of history, the ruins of wars nobody came to win, the bones of the missing.”

The Island of Missing Trees jumps between decades and locations from the 1970s to 2010 in Cyprus and the UK. Earlier timestamps feature Ada’s parents, two young Cypriots, falling in love against the constraints of taboo—Kostas, a Greek Christian, and Defne, a Turkish Muslim. They meet secretly at a bar called The Happy Fig, lose their virginity in an act of positive urgency, and are finally separated by war. Kostas moves to England— “He was not prepared for this new sky overhead, which was dimly lit most of the time, only occasionally flickering into life like a buzzing bulb with low voltage”—and eventually returns to Cyprus in the early 2000s, a botanist in search of native plant specimens.

Here, he reunites with Defne, now an anthropologist working for the Committee on Missing Persons to locate people disappeared in the war, unearth their remains, and give them a proper burial. Planting (and burying) the fig tree in the family UK garden is a gesture of hope and renewal, one that—like so many books on this list—shows plants connecting us to life and tradition beyond one lifetime or geography. 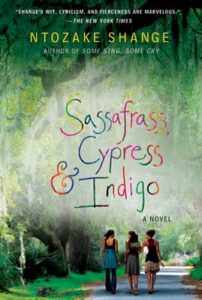 Plants permeate this entire book so that one cannot help but feel like they are woven throughout the text, yielding the narrative and identifying its protagonists, while literally nourishing and healing them. “Indigo imagined tough winding branches growing from her braids, deep green leaves rustling by her ears, doves and macaws flirting above the nests they’d fashioned in secret, protected niches way high up in her headdress.” Sassafras, Cypress, and Indigo has a formally complex structure that combines epistolary letters, play-like dialogues, a third person narrative, as well as recipes for meals, incantations, and cures.

Almost all of those recipes, whether “REALIZING SPIRITS’ HINTS / WHAT YOUR DREAMS CAN DO FOR YOU,” “Red Sauce: Sassafras’ Variation Du-Wop ‘59,” or “Easy Asparagus” prominently feature plants as ingredients for care, nourishment, or symbolic reference. Those recipes are also invitations to the reader to join the characters in a meal, act of care, or understanding. Ingredients like spinach, okra, watermelon, sugar convey their own historical significance, often relevant to America’s history of slavery, repurposed and reimagined in the trajectories of the three sisters to ask about narrative agency in the contexts of South Carolinian Gullah culture in the Sea Islands, the Black Arts Movement, and more. 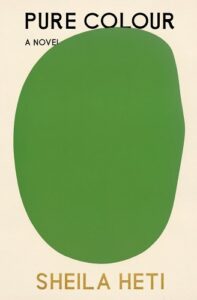 Pure Color has to be one of the most wonderfully strange books I’ve read in a while. It spans a broad philosophical and emotional space, opening with the creation of the world and its subsequent admiration. “You’d think it would only last a moment, this delay of God standing back, before stepping forward again to finish the canvas, but it appears to be going forever.” Pure Color takes place between drafts of the world, as the first one appears not to be working out so well.

The nature of the world is slippery and strange, sometimes there is one God, sometimes many and people are categorized according to animal-types that make them expect love differently. It begins with Mira at the American Academy of American Critics. She self-describes as a bird, starts working at a lamp store, avoids the overbearing affection of her father, and is smitten by an older woman, Annie, whom Mira categorizes as a fish. As if out of nowhere, and because people die out of nowhere, Mira’s father, a bear, falls ill and dies. His death creates a vortex in the book. “Only once in her life, lying in bed with her dying father, was [Mira] actually where she was, and not imagining she was somewhere else.”

Following his death, she transports herself to an old memory with her father, “throws out her brain, her arms, her hair, her feet,” and become a leaf. “She hadn’t known that plants were the grateful recipients of all consciousness—not only of people, but of snails and squirrels and the sun and the rain; that it was their generosity that made them so lush and green, the very color of welcome.” She finds her father in this leaf and the two engage in philosophical questions. How wonderful and strange that a book about art, a book that categorizes people as animals while provoking existential questions about god and gods and art making, would hold this surreal moment of stillness at its center, even to the extent that one must also anticipate a curious return to life thereafter. Mira departs from the leaf, gets a job selling jewelry, and attempts to materialize her leaf-knowledge into the human world. 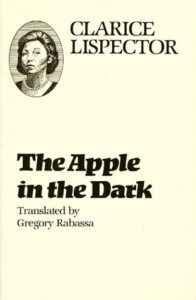 I’d heard rumors that Lispector wrote a detective novel and was eager to find it. It is worth every page, opening with Martim running through a wasteland as though being chased, certain he has committed a crime. We learn he thinks he shot and murdered his adulterous wife and seems haunted, devoid of language in those early pages—cast of out paradise, let’s say—but slowly, through the companionship of other beings,  makes his way back into human society: first by talking with stones, then plants—“The silence of the plants was his own diapason”—until arriving at a farm run by two sisters, Ermelinda and Vitória.

He begins by caring for the cow in a state of deep empathy as he helps the women tend their land, negotiating their respective interest in him. As the book progresses, Martim passes through evolutionary stages, as though rebuilding his human subjecthood. Only by becoming a human hero can he capably face the judgement of society and the limitation of language (or art). Vitória, the rational sister, later visits him in prison and—echoing Elif Shafak’s notion that trees and history are entwined—monologues about her past as she accounts for her own attempt to chop down an apple tree that she later decides to spare. 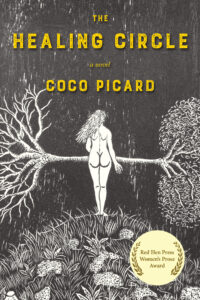 The Healing Circle by Coco Picard is available from Red Hen Press.

Coco Picard is a writer, cartoonist, and curator. She is the author of two graphic novels, Meowsers (forthcoming) and The Chronicles of Fortune (2017), which was nominated for a DiNKy Award. Art criticism and comics have otherwise appeared under the name Caroline Picard in Artforum, Hyperallergic, The Paris Review, and Seven Stories Press, among others. She started the Green Lantern Press in 2005, received her MFA from the School of the Art Institute and was a Bookends Fellow at Stony Brook University. 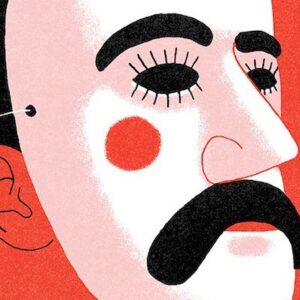