In the 30 Books in 30 Days series leading up to the March 16 announcement of the 2016 National Book Critics Circle award winners, NBCC board members review the thirty finalists. Today, NBCC board member Jane Ciabattari offers an appreciation of criticism finalist Alice Kaplan’s Looking for The Stranger: Albert Camus and the Life of a Literary Classic (University of Chicago Press).

“Reading The Stranger is a rite of passage,” writes Kaplan in the prologue to her remarkable cultural history of Albert Camus’s iconic novel. Over the years, she notes, critics have interpreted The Stranger as “a colonial allegory, an existential prayer book, an indictment of conventional morality, a study in alienation, or a ‘Hemingway rewrite of Kafka.’”

Kaplan begins her story in 1939, when Camus was a 25-year-old journalist living in his native Algeria, already shaped by childhood poverty and tuberculosis, and on his way to developing a finely tuned sense of the absurd. She details Camus’ writing process, using his diaries and letters, and analyzes the shifts in interpreting the novel over the decades after its publication in 1942. (“Three years to create a book,” Camus wrote at the time.. “Five lines to ridicule it.”)

Kaplan includes a section in which she addresses Kamel Daoud’s 2015 novel The Meursault Investigation, which, she notes, sets its own tone with a riff on that immortal first sentence: “Today, M’ma is still alive.”

M’ma is the Algerian mother of Haroun, the narrator of Daoud’s novel, who can never break free of his duty to console a mother who is in perpetual mourning for her beloved son Moussa, killed on a beach in Algiers in 1942 by a guy named Meursault, the narrator of The Stranger. “My brother Moussa,” Haroun explains to anyone who will listen, “died in a book.” Daoud portrays Algeria since 1962 through Haroun’s eyes, and we come to understand that if Camus could return to Algeria today, he would have to acknowledge that Haroun and his brother and their nation—not the other guy—got stuck with the weight of the absurd.

Kaplan completes her exploration of Camus’ “gripping and puzzling” classic in Oran, where Camus witnessed two men brawling on a beach, inspiring the “mythical scene” that resonates to this day.

Kaplan’s previous work at the intersection of literature and history has yielded several books about French writers during the Nazi occupation (including the NBCC finalist The Collaborator: The Trial and Execution of Robert Brasillach), French Lessons: A Memoir, also an NBCC finalist, and Dreaming in French: The Paris Years of Jacqueline Bouvier Kennedy, Susan Sontag, and Angela Davis.

She is one of the few writers with the literary, biographical and historical skills—and the audacity—to take on a project like Looking for the Stranger. Her range is magnificent, her critical vision impeccable.
30 Books in 30 DaysAlice KaplanawardsCamuscriticsJane CiabattariNBCC
Share: 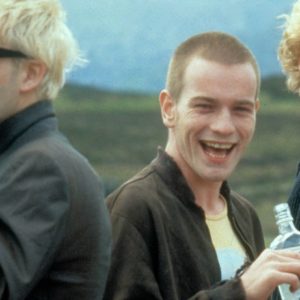 My first thought when I saw the first trailer for the sequel to Trainspotting was: wait, these people are still alive? Not the actors,...
© LitHub
Back to top