30 Books in 30 Days: House of Lords and Commons

In the 30 Books in 30 Days series leading up to the March 16 announcement of the 2016 National Book Critics Circle award winners, NBCC board members review the thirty finalists. Today, NBCC board member Tess Taylor offers an appreciation of poetry finalist Ishion Hutchinson’s House of Lords and Commons (Farrar, Straus and Giroux).

House of Lords And Commons was one of my favorite books this year. It is ragged and fiercely beautiful. Its double-edged language is inviting and unsettling. Tracing the landscapes of memory, childhood and his native Jamaica, Hutchinson’s poems are the skeins a thinker makes of trouble, inequality, global travel, lost time. Hutchinson’s got a gift for syntax. Many of his poems string a single, side-winding sentence into a shimmering thread that shuttles between the past and the present, the haves and the have nots, outrage and beauty.

In a poem about cane workers called “Fitzy and the Revolution,” Hutchinson writes, “Cane cutters who filed their spines against the sun bringing down great walls of cane… // Every year the same men, different cane, and when different men, / the same cane.” This poetry compresses witness, and soon Hutchinson turns his razor-sharp gaze on a nearby fortress where a character called the “Minister of All” cannot sleep. “The flags stiffened on the embassy building but / did not fall when the machine guns / flared and reminded that stars were inside / the decrepit towns, in shanty zinc holes, / staring at the fixed constellation…”

These poems are lighthouse beams that concentrate fervor and anger. It’s a kind of concentration we might all wish to summon as we each try to name the world we now live in and look for the world we want to see next. “I became a thicket of ears,” Hutchinson writes. Listening to him, we do, too.

Tess Taylor grew up in Berkeley, California, where she led youth garden programming at the Berkeley Youth Alternatives Community Garden and interned in the kitchen at Chez Panisse. In her twenties, she dropped out of Amherst College to become a translator and chef’s assistant at L’Ecole Ritz Escoffier in Paris. An avid gardener and cook, she is also an acclaimed poet. Her chapbook The Misremembered World was selected by Eavan Boland and published by the Poetry Society of America. Her work has appeared in The Atlantic, Boston Review, Harvard Review, The Times Literary Supplement, and The New Yorker. The San Francisco Chronicle called her first book, THE FORAGE HOUSE, “stunning” and it was a finalist for the Believer Poetry Award. Tess is currently the on air poetry reviewer for NPR’s All Things Considered, and was most recently visiting professor of English and creative writing at Whittier College. Her second book, WORK AND DAYS, was published in 2016. Her third book, RIFT ZONE comes out April 2020. 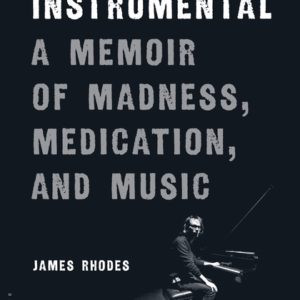 James Rhodes’ passion for music has been his lifeline—the thread that has held through a life encompassing abuse and turmoil....
© LitHub
Back to top