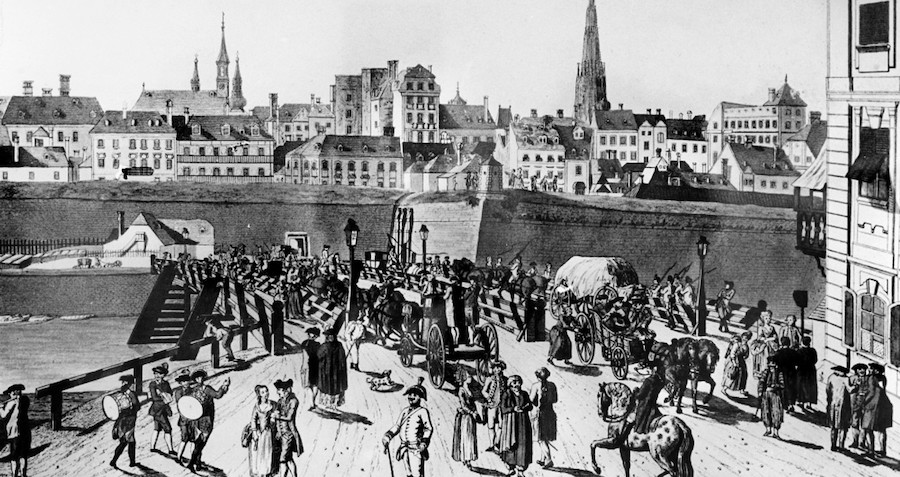 One of the finest accounts of early 18th-century Vienna is by Lady Mary Wortley Montagu (1689–1762), the wife of the British ambassador to Constantinople, Edward Wortley Montagu. Her writings are best known for her accounts of when they arrive in Turkey: “The very first example of a secular work by a woman of the Muslim Orient.” However, Lady Montagu’s letters also include detailed accounts of her three-month stop in Vienna from September to November 1716 and her experience of the city, society, its court and diplomatic life. In a letter to her friend the Countess of Mar, she writes about her arrival and first impressions of Vienna:

We travelled by water from Ratisborn [Regensburg], a journey perfectly agreeable, down the Danube, in one of those little vessels, that they very properly call wooden houses, having in them almost all the conveniences of a palace, stoves in the chambers, kitchens, etc. They are rowed by twelve men each, and move with an incredible swiftness, that in the same day you have the pleasure of a vast variety of prospects; and within a few hours’ space of time one has the different diversion of seeing a populous city adorned with magnificent palaces, and the most romantic solitudes, which appear distant from the commerce of mankind, the banks of the Danube being charmingly diversified with woods, rocks, mountains covered with vines, fields of corn, large cities and ruins of ancient castles. I saw the great towns of Passau and Lintz [sic], famous for the retreat of the Imperial court when Vienna was besieged.

This town, which has the honour of being the emperor’s residence, did not at all answer my ideas of it, being much less than I expected to find it; the streets are very close, and so narrow, one cannot observe the fine fronts of the palaces, though many of them very well deserve observation, being truly magnificent, all built of fine white stone, and excessive high, the town being so much too little for the number of people who desire to live in it, the builders seem to have projected to repair that misfortune, by clapping one two on the top of another, most of the houses being of five, and some of them six storeys. You may easily imagine, that the streets being so narrow, the upper rooms are extremely dark; and what is inconveniently much more intolerable, in my opinion, there is no house that has so few as five or six families in it.

The apartments of the greatest ladies, and even of the ministers of state, are divided but by a partition from that of a tailor or a shoemaker: and I know nobody that has above two floors in any house, one for their own use, and one higher for their servants. Those that have houses of their own, let out the rest of them to whoever will take them; thus the great stairs (which are all of stone) are as common and as dirty as the street. ’Tis true, when you have once travelled through them, nothing can be more surprisingly magnificent than the apartments. They are commonly a suite of eight or ten large rooms, all inlaid, the doors and windows richly carved and gilt, and the furniture such as is seldom seen in the palaces of sovereign princes in other countries—the hangings the finest tapestry of Brussels, prodigious large looking glasses in silver frames, fine japan tables, beds, chairs, canopies, and window curtains of the richest Genoa damask or velvet almost covered with gold lace or embroidery. The whole made gay by pictures, and vast jars of japan china, and almost in every room large lustres of rock crystal

…I never saw a place so perfectly delightful as the Fauxbourgs [suburbs] of Vienna. It is very large, and almost wholly composed of delicious palaces; and if the emperor found it proper to permit the gates of the town to be laid open, that the Fauxbourgs might be joined to it, he would have one of the largest and best-built cities of Europe.

It didn’t take Lady Montagu long to be invited to the finest houses, including those of Johann Adam Prince Liechtenstein, Count Schönbrunn, ‘the emperor’s favourite’ Gundacker Ludwig Count Althann and the salon of Madam Dorothea Elisabeth Rabutin: “I have already had the honour of being invited to dinner by several of the first people of quality; and I must do them the justice to say, the good taste and magnificence of their tables…I have been more than once entertained with fifty dishes of meat, all served in silver, and well dressed; the dessert proportionable, served in the finest china. But the variety and richness of their wines is what appears the most surprising. The constant way is, to lay a list of their names upon the plates of the guests, along with the napkins; and I have counted several times to the number of eighteen different sorts, all exquisite in the kinds.”

Lady Montagu’s lively descriptions of her time in Vienna and Constantinople are credited as inspiration for subsequent travel writers, especially female writers.

Lady Montagu visited both the opera and theatre, including a lavish outdoor opera performance of Enchantments of Alcina (‘Angelica Vincitrice di Alcina’) by Johann Joseph Fux, the most important Austrian baroque composer of the age. The performance took place in the grounds of the then imperial summer residence, the Favorita Palace, and according to Lady Montagu cost the emperor €18 million in today’s money, but “nothing of that kind ever was more magnificent.” The huge stage set was built over a pond, so the performance could include a naval fight of “guilded [sic] vessels.” The event was clearly the place for high society to be and was also attended by the papal nuncio Monsignor Spinola, the French ambassador Comte de Luca and Venetian ambassador Cavaliere Grimani.

“If their Operas are thus delightful, their comedies are in as a high a degree ridiculous. They have but one playhouse, where I had the curiosity to go to a German comedy,” Lady Montagu reports, having paid a gold ducat for a box in the Kärntnertortheater: “I never laughed so much in my life.” The theatre, which stood right next to the city wall and its Carinthian Gate (Kärtnertor), was torn down in 1873 together with many other sites next to the old walls. It stood where today you find the world-famous Hotel Sacher at the rear of the State Opera.

One of the joys of Lady Montagu’s letters is the color and detail of her accounts. This is especially the case when she writes about her first visit to court:

In order to that ceremony, I was squeezed up in a gown, and adorned with a gorget and the other implements thereunto belonging: a dress very inconvenient, but which certainly shews the neck and shape to great advantage. I cannot forbear in this place giving you some description of the fashions here, which are more monstrous and contrary to all common sense and reason, than ’tis possible for you to imagine.

They build certain fabrics of gauze on their heads about a yard high, consisting of three or four storeys, fortified with numberless yards of heavy ribbon…it certainly requires as much art and experience to carry the load upright, as to dance upon May-day with the garland. Their whale-bone petticoats outdo ours by several yards’ circumference, and cover some acres of ground.

The visit to court by Lady Montagu was for an audience with Empress Elisabeth Christine, the wife of Emperor Charles VI. She was renowned for her delicate beauty and as mother of the future Empress Maria Theresa. Accomplished in music, discretion, modesty and diligence, she was well regarded for fulfilling her representational role as empress, both within the Spanish court protocols of hunting and balls and amateur theatre, as well as observing the religious devotion days of Pietas Austriaca (Austrian Piety). She was an excellent shot, attending shooting matches and participating in hunting, and she and her ladies-in-waiting dressed in amazon attire and also played billiards.

Lady Montagu recounts how the “belles passions are managed in this country’” when a young Count suggests that she should engage in “a little affair of the heart.”

Lady Montagu was “perfectly charmed by the empress: I cannot however, tell you that her features are regular; her eyes are not that large, but have a lively look, full of sweetness; her complexion the finest I ever saw.” The empress “had the goodness to talk to me very much, with that grace so natural to her…His imperial majesty did me the honour of speaking to me in a very obliging manner; but he never speaks to any of the other ladies; and the whole passes with a gravity and air of ceremony that has something very formal in it.”

Time was spent playing cards (Quinze) and target shooting: “The empress herself was seated on a little throne at the end of a fine alley in the garden, and on each side of her were ranged two parties of her ladies of honour with other young ladies of quality, headed by the two archduchesses, all dressed in their hair full of jewels, with fine light guns in their hands; and at proper distances were placed three oval pictures, which were the marks to be shot at…all the men of quality at Vienna were spectators; but only the ladies had permission to shoot.” Given that the female competitors laughed at Lady Montagu because she was afraid to handle a gun, it seems unlikely that she won the valuable first prize of a fine ruby ring set round with diamonds in a gold snuff box.

Lady Montagu didn’t shy away from her more salacious experiences in high society: “…getting a lover is so far from losing, that ’tis properly getting reputation; ladies being much more respected in regard to the rank of their lovers, than that of their husbands…Tis the established custom for every lady to have two husbands, one that bears the name, and another that bears the duties. And these engagements are so well known, that it would be a downright affront, and publicly resented, if you invited a woman of quality to dinner, without at the same time inviting her two attendants of lover and husband, between whom she sits in state with great gravity.” Lady Montagu recounts how the “belles passions are managed in this country’” when a young Count suggests that she should engage in “a little affair of the heart:” “Do me the honour of letting me know whom you like best among us, and I’ll engage to manage the affair entirely to your satisfaction.”

Lady Montagu’s lively descriptions of her time in Vienna and Constantinople are credited as inspiration for subsequent travel writers, especially female writers, following her assertion that women travelers could gain an intimate view of foreign life not available to male counterparts. She also returned at the end of the diplomatic posting with an understanding of the Ottoman medical practice of inoculation against smallpox, which she introduced to Western medicine. 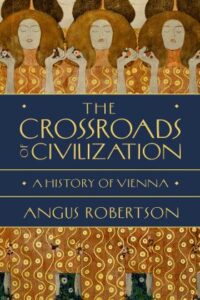 Excerpted from The Crossroads of Civilization: A History of Vienna by Angus Robertson. Copyright © 2022. Available from Pegasus Books.

Angus Robertson began his journalistic career with the Austrian Broadcasting Corporation (ORF) and also reported from Vienna for National Public Radio, the BBC, Ireland's RTÉ and other leading broadcasters. In 2016 he was awarded the Decoration of Honor for Services to the Republic of Austria, the country's highest national honor. From 2001 to 2017 he was a member of the UK House of Commons and in 2021 was elected as Member of the Scottish Parliament for Edinburgh Central. He is currently Cabinet Secretary for the Constitution, External Affairs and Culture in the Scottish government.

The Mystery of the Indestructible Beetle 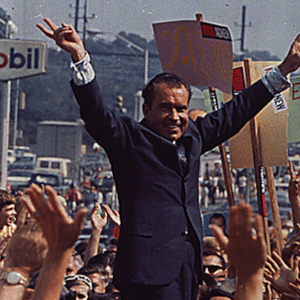